Home / The future ain’t what it used to be

I’ve made it clear that we at ValueTrend have been bearish coming into the US election. We’ve recently been holding 30% cash coming into this event, although we spent a bit of that cash in today’s selloff. This stance has paid off – as our Investment Platforms have substantially reduced the volatility over both September and October as markets gyrated negatively. We’ll post our October numbers next week when the month is officially over.

Despite my cautious neartermed outlook, I anticipate a rising market in the coming years. That said, I believe that investors will need to adjust their expectations for returns within the large capped market indices. This thesis is based on two potentials: A reduction in the amounts, and in the effectiveness of Federal and Fiscal stimulus. Plus, the historical tendencies for returns to regress towards their averages over longer periods of time. Lets look at both of these factors today.

The Fed, and the Fiscal side

Much of the rally seen since the 2009 lows, particularly the returns seen since Trump’s inauguration in January 2017, have come from a steady stream of monetary stimulation (rates) courtesy of the Federal Reserve. The potential for similar Fed-driven stock market performance over the next few years, no matter who gets elected, is diminishing. Here is a quote from Bill Dudley, Ex NY Fed President – from a Bloomberg article (courtesy BearTraps):

“No central bank wants to admit that it’s out of firepower. Unfortunately, the US Federal Reserve is very near that point. When interest rates stay low for long enough, the policy can even become counterproductive. In the U.S., monetary stimulus has already pushed bond and stock prices to such high levels that future returns will necessarily be lower. Assuming stable valuations, expected equity returns over the next decade are probably no greater than 5% or 6%. The 0.7% yield on the 10-year Treasury note doesn’t even cover expected inflation. As a result, people will have to save more to reach their objectives, be they a secure retirement or sending their kids to college. That leaves less money to spend.”

In addition to easing monetary policy by the Fed over that past 10 years, we’ve had additional firepower injected into the market via fiscal stimulation. COVID CQ’s for unemployed workers, corporate subsidization (airlines, etc.) for hard-hit sectors in the economy, and infrastructure spending to stimulate growth. A percentage of this cash gets injected to the market – Robinhood investors have piled into the overweight tech & “stay home” stocks in the S&P 500 and NASDAQ indices using this cash. But, like all good things, fiscal stimulation will come to an end. A reduction in “free money” will have an impact on stock market performance.

Regression to the mean

There’s another factor, beyond the ineffectiveness of Fed monetary policy and government fiscal stimulation, that may contain broad stock index returns over the coming years. It is the mathematical tendency for averages to “regress to the mean” when they rise above, or below their average returns.

The average (15+ year) returns for stock markets tends to be around 7% for the broad world market index (MSCI World Index), near 8% for the broad US index’s (S&P 500), and about 6% for the TSX 300. The last ten years have seen the US market (S&P 500) in particular outperform that average approaching double its average returns. It’s annualized rate has been well over 13%!

To illustrate what this means to us as investors, lets look at historic price trends during the two greatest bull markets of all time for the SPX. They were: 1982 to 1999, and 2009 to the present. You’ll notice that prices tend to contain themselves within a high range, and a low range within bull markets. This is known as a “channel”.  When the market nears or exceeds the top channel line, it tends to decline to the bottom channel. And visa-versa. This up/down price pattern illustrates the principle of “regression to the mean” insofar as the keeping to the market’s  average rate of return over time.

I probably don’t need to point out that we are near the top of the recent bull markets trend channel. This implies that prices will decline, even if we anticipate a continuation of the 13% average returns of the S&P 500. If we were to draw a longer trend channel that included the 2001 and 2008 market crashes – you’d see that we could experience a much bigger decline in order to bring the average back to the historic average return of 8%. In either case, there is evidence of some take-back for the SPX in the next little while. And that’s not so good for buy n’ hold investors right now. But it may be good for you and I. 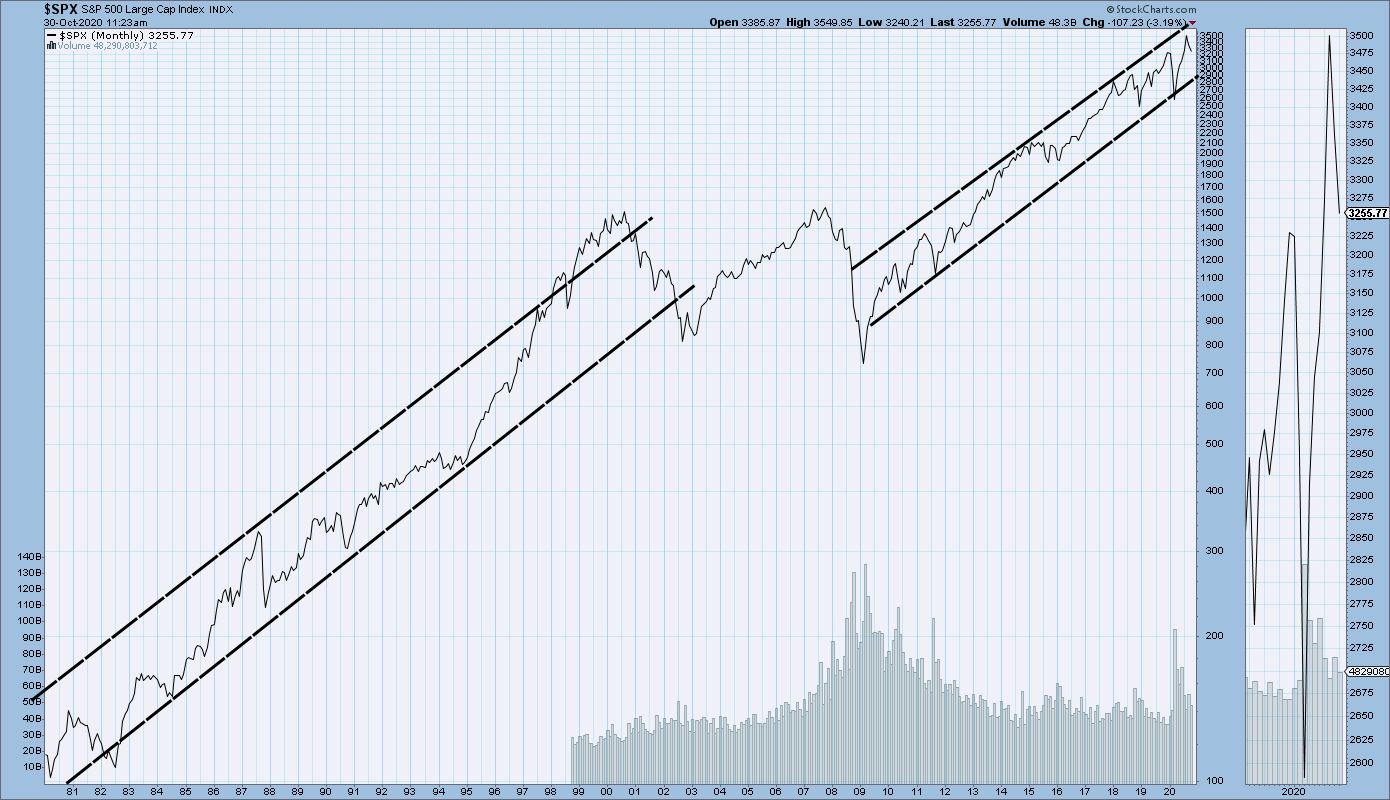 It is my contention that the coming years will be the domain of the active investor. For example, recent volatility on the markets in September and again in late January were the result of a delayed stimulus package in light of rising COVID cases (albeit, declining death rates per this report ). That, along with the US election uncertainty. Buy n’ hold has worked very well over the long term, to be sure. But it underperforms during times of volatility, and during times of lower  returns – aka when we see a regression to the mean from a  highpoint. Only active investors can migrate between sectors and stay where the money is going. Only active investors can manage risk through beta strategies. During times of lower average returns, only those two strategies (sector rotation, risk on/ risk off trading) can bring an investors returns back to an attractive level.

As noted at the start of this blog, our active approach here at ValueTrend paid off when markets went sideways in the past 2 months. And its not just us. Active traders are thriving in this environment. I hope you are one of them. If not, perhaps its time to learn to trade by reading my book Sideways, or (if I may humbly suggest), contact us to discuss how we can manage your money effectively in the current and coming investment climate.