My favourite micor-brewer, Barrie Ontario’s own “Flying Monkeys Brewery” prints a  humorous message under each of their bottle caps. While at my cottage recently enjoying one of their truly suburb craft ales, I came across this pearl of wisdom underneath the bottle cap:  “41.6% of statistics are made up on the spot”.

With the Flying Monkey’s bottle cap message in mind, I thought I’d throw a few statistics around for this weeks macro-view blog–although these numbers were not made up on the spot. As a note of caution for this blog, you should be warned that I’ll be using the “F-word” (fundamental analysis), but only just this once.

According to Zack’s research, at the beginning of the year, the S&P 500 had a forward P/E multiple (on 2013 earnings), of 13.8. As of the end of July, the forward P/E multiple hit 15.7. Meanwhile, by the end of July, the S&P 500 was up 20%. Thus, the majority of the market’s gain can be attributed to stocks becoming more expensive rather than earnings growth.

One of the factors that has pushed markets up over the past 4 years has been the US Federal Reserve’s quantitative easing, which effectively amounted to the unprecedented printing of money by the Fed. Greater liquidity brought by this Fed-sponsored printing press has been pushing the value of risky assets up, including stocks, bonds (until recently) and real estate. The Fed felt that if asset prices rose, everyone would become wealthier. Consumers will buy more goods and corporations would hire more employees. The Fed’s easy money program has done its job. Unemployment is slowly getting better, and the economy has moved from negative 4.3% growth to positive growth of over 2% since QE began.

The problem is that although corporate earnings can grow almost indefinitely, valuations cannot. As Mitch Zacks pointed out in one of his reports “Thirty years from now, there is no reason that aggregate corporate earnings could not be triple their current levels. However, I can almost guarantee that in 2043 the P/E multiple of the S&P 500 will not be triple its current level.”  Changes in P/E levels such as the recent PE expansion are not sustainable over long periods of time. It is very unlikely P/E multiples will continue to expand at the rate in the second half of this year that they have in the first half of the year. Right now, the market is already pricing in strong economic recovery. Therefore, GDP growth would need to surprise to the upside in order for the P/E multiple to continue to increase. As Sheraz Mian, also of Zacks, stated in another Zacks report “What all of this boils down to is that current earnings estimates are high and they need to come down – and come down quite a bit.”

The chart–you knew there had to be one… 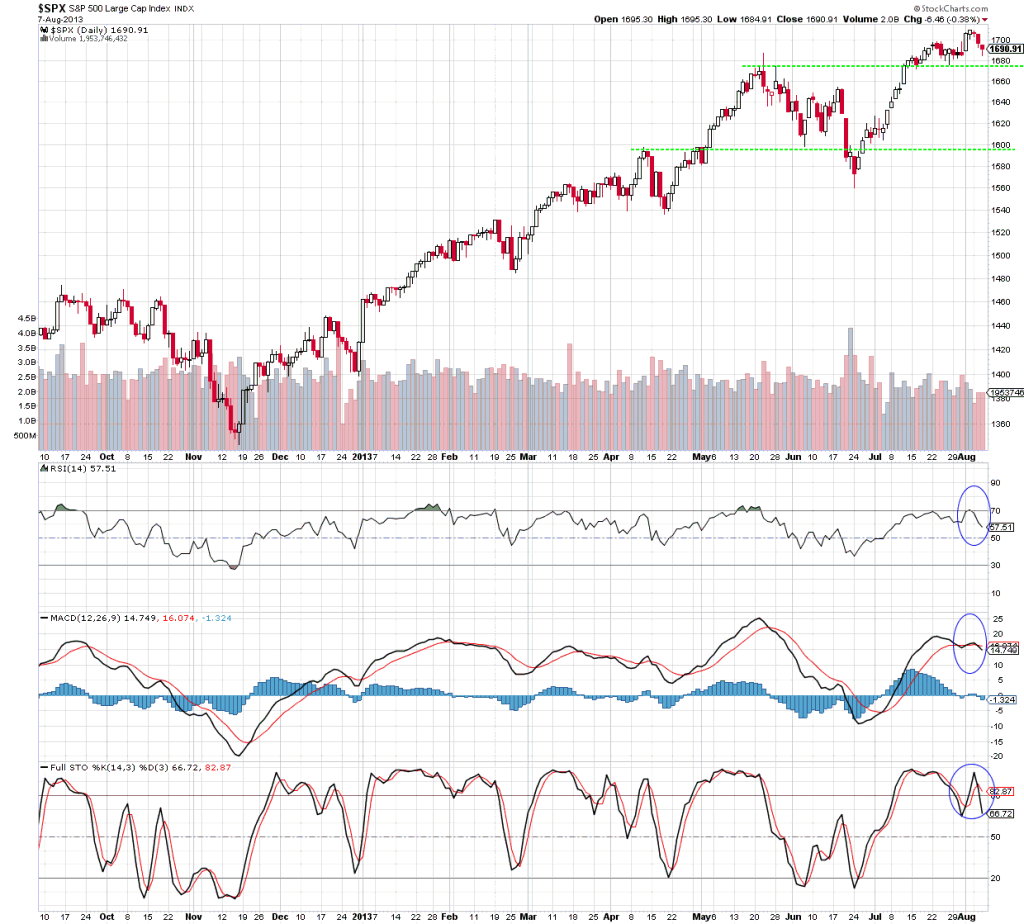 The charts do suggest an overbought condition for the S&P500 right now. Oscillators are beginning to “hook down”, and the seasonal patterns are typically flat in August, followed by bearish in September. Perhaps a well deserved pause or correction will satisfy the valuation expansion discussed by the good folks at Zacks mentioned above. Support for the S&P comes in at just below 1680 in the very near term, followed by 1600 if that level is broken. A return to 1600 may signal a return to more realistic valuations. I for one would not be too surprised at seeing such a level reached by October.