Home / The election and the markets

The election and the markets

Many investors are worried about the upcoming election – which is probably the most interesting one I can recall . Never have two US election candidates seemed so unfit to lead. The uncertainty surrounding this election is starting to be reflected in the markets, having sold off recently. Many investors are asking if now is the time to bail out of stocks. From a presidential cycle point of view, as well as seasonal perspective – the answer is no. If you haven’t already – I strongly recommend reading this blog, where I presented an argument for a positive stock market election after the election ends.

Beyond the seasonal and presidential cycles, I’d like to offer a bit of advice from a long time traders perspective. I’ve been doing this for 27 years, and I’ve seen this type of thing too many times-people panic and worry around events only to realize the panic was unnecessary (think Y2K and recently, Brexit). Yes, markets can sell off – but recall that as traders – uncertainty is our friend!

I am convinced enough about the potential for volatility that we have 30% cash and a 5% hedge position in the ValueTrend equity portfolio. We also sold out of our more vulnerable positions such as the Mexican stock FMX recently, and bought 10% in silver (which goes up as Trump succeeds, theoretically) –so that’s a hedge too. Obviously, you don’t sidestep a correction with only 35% (equivalent) cash/ hedge. We are not immune to market malaise– but we’ve lowered the risk for our portfolio.

More importantly – we actually hope for a bit more election-fear selloff.  I will swoop in with the cash to buy bargains as markets sell off!! At the end of the day it’s not completely important who wins—the senate controls and balances things. Its more perception. And that can work in our favor as traders. 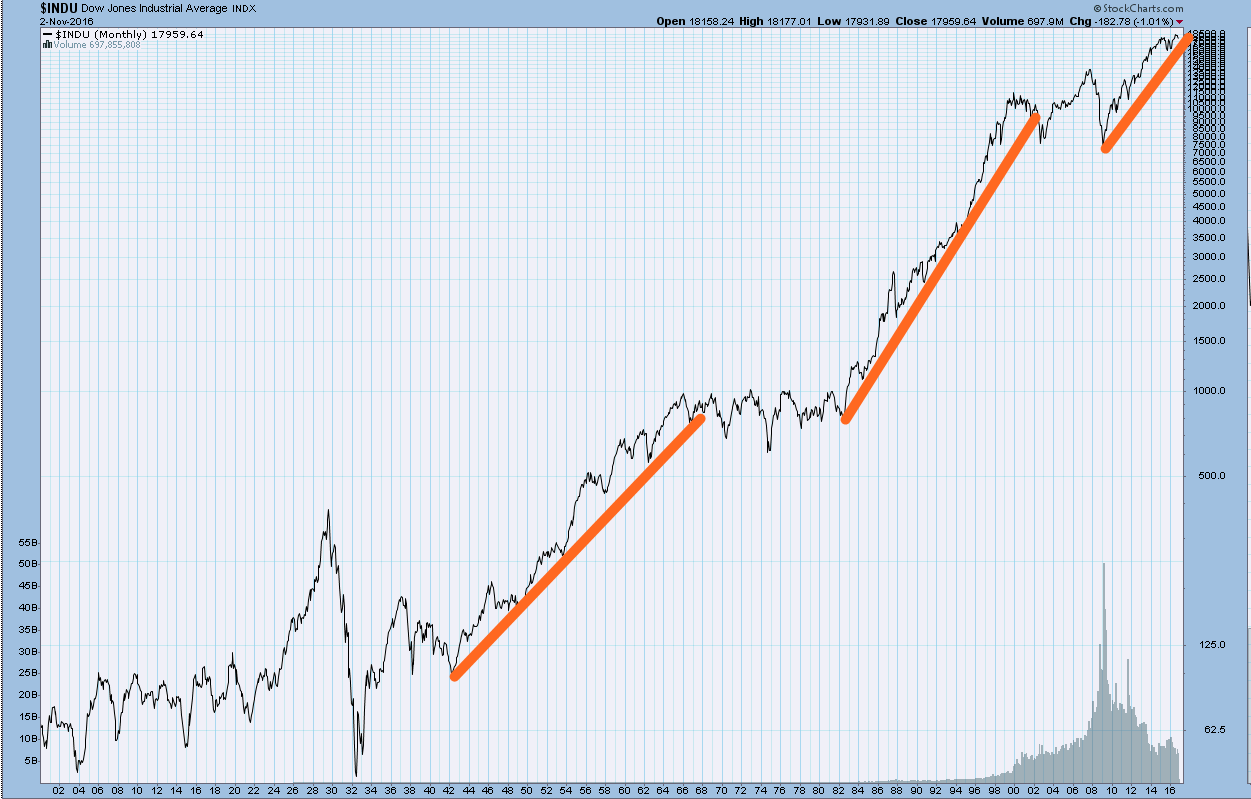 Above is a long termed chart of the DJIA. I thought I’d post this to keep this election, and everything else, in perspective. The chart clearly shows us that we are in the third secular bull market since 1900. The first two secular bulls lasted about 20 years each. A bull market ends when a trough on the monthly chart takes out the last trough, and the market has also cracked its 200 day MA (not seen on chart). The new bull begins when the last significant high is taken out to the upside, backed by an eventual move above the 200 day MA. The first two bulls were:

The current secular bull arguably began in 2009 – although officially the new bull wasn’t verified until it took out the old highs – which happened in 2103. Anyhow, if we use 2009 as the starting point–we are coming up on 8 years into the current secular bull market. If you read my work, you know that I believe we are in a mini-bubble, and will see a strong correction sooner or later. However, the secular bull remains intact until the last significant monthly-bar low is taken out (15,500 for the DJIA) and a break of the 200 day MA happens.

Hillary or The Donald might cause a ripple, but it’s unlikely they will throw this secular bull market off course.