Todays’ blog is my yearly off-topic rant. I’d like to present a revolutionary idea for a new type of tax system in Canada. A few points to start:

That said….Sit back and enjoy the ride as I first cover WHY we should examine changing our tax system, and then HOW I propose to change it. A little tongue in cheek may apply as we examine the “HOW” part of this strategy. Enjoy!

What’s wrong with this picture?

Canada sports the second highest income taxes in the world. Bad enough, that…But then there’s the 13% HST on top of our after-tax dollars! There’s property taxes (vs. tax deductible in the USA!), investment taxes (gains, dividends, interest), drivers licenses, and plate stickers. There’s custom/import taxes, luxury taxes, parking fees (for roads our taxes supposedly already pay for), land transfer taxes (shockingly high), and other excise taxes.  Lets not forget our lovely carbon taxes (now scheduled to rise again!) on top of existing gasoline taxes. How about probate fees, and estate taxes. These, after a lifetime of paying all those other taxes. Incredible, really. 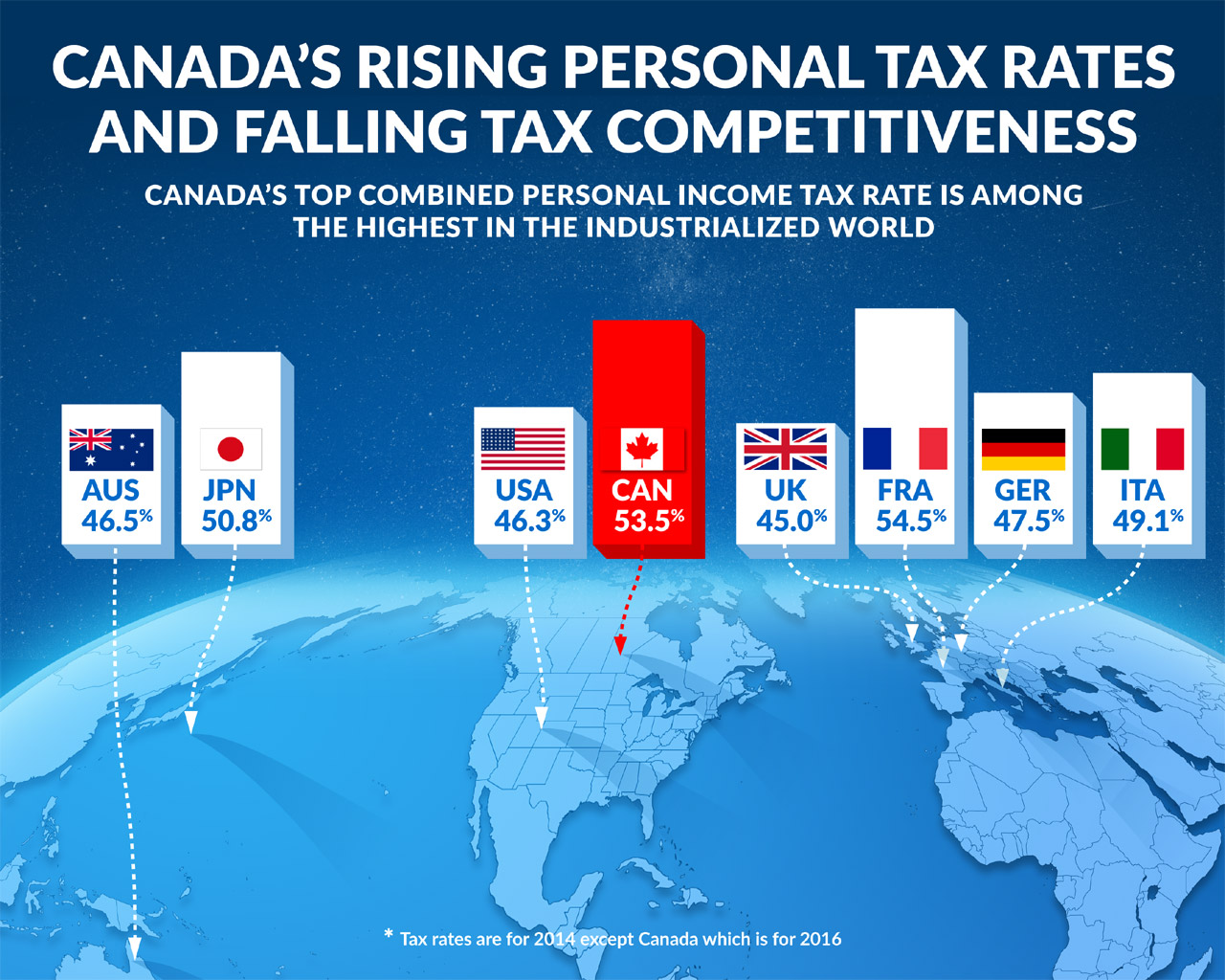 Is it only “the rich” who are paying these tax levels? Not according to Pierre Poilievre: “Right now, low-income people face marginal effective tax rates of up to 80 per cent when you count both the clawbacks and taxes.”

The taxes noted above vastly exceed income taxes, and most of them affect lower/ middle class income earners.

Despite the incredibly high and pervasive taxes in Canada, don’t you dare criticize high tax levels in the presence of some people. You’ll get this response:

“Don’t you like your streets, hospitals, police, sewers, schools, etc.?”

My answer: Yes, I agree that paying taxes for universal access to Medicare, roads, education etc. is desirable.

My beef is not about paying taxes:  I would prefer that our tax dollars  actually be used for schools, hospitals, streets, etc.

Tax dollars were meant to pay for these things?

This proclamation was made by the pigs who control the government in the novel Animal Farm , by George Orwell . The sentence is a comment on the hypocrisy of socialist governments who propagate equality of their citizens but in reality, give power and privileges to a small elite.

Take the $8.6MM cottage upgrades to allow Trudeau greater comfort while he hid from parliamentary enquiry over COVID spending and the WE scandal.  His bedroom conversion alone was $378,711. You and paid for a bedroom reno that cost as much as some peoples entire houses! We paid for a helipad at that cottage because he prefers to be helicoptered to that cottage rather than drive. He also built at our expense a tree house with a zip line, a $9,000 bee farm complete with bee farmers, a $6,000 organic garden, then spent $13,500 to protect the garden. He bought several canoes and boats, and $2,000 to improve the ice on his private skating rink.

How about the latest in a growing list of scandals, like the WE charity contributions by taxpayers that ended up back in his family pockets? Lets not forget about his first two costly ethics scandal’s.  Not to mention his narrow escaping another charge via the Norman fiasco. Then there’s the raise he attempted to give himself and MP’s (then shamed into not accepting it) right at the time of COVIDs breakout – when jobs were being lost, and businesses were closing across the nation.

How about the endless vacations, and the chef’s and costume makers he travels with. How about the 2 nanny’s he tried sneaking past the taxpayer, or the money to Aga Khan’s charity followed by the return gift of a personal vacation? On and on….

Trudeau calls business people tax cheats if they write off ineligible items – like a personal expense as a business expense. Well, what does he call spending our tax dollars on his personal pleasures?

Justin learned from the best – his father! 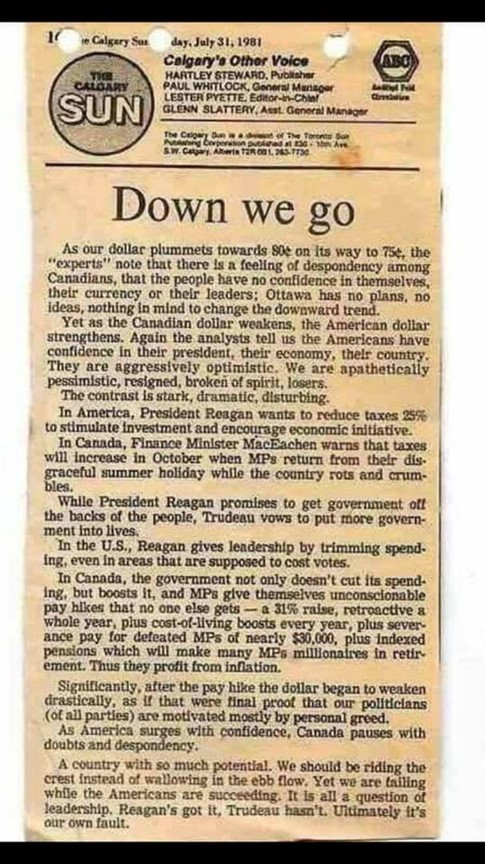 “Don’t you like your streets, hospitals, sewers, schools, etc?”

Forget improving Medicare wait times or improving infrastructure that would benefit Canadians. Instead, Trudeau directed $761MM sent to other countries to enhance their education and family planning. Or how about the $2.6B (that’s with a B!!) sent to the Commonwealth climate change program, the $300MM Rohingya refugee program, the $125MM Caribbean reconstruction program, the $650MM sexual health program in Haiti, the $50MM to Palestine flood relief, the $840MM to Syria, the $4.6B on his botched pipeline negotiations, the $750MM given to to India.

Just this week, the Liberals announced yet another $485MM being given to the WHO for foreign aid outside of our own country. Meanwhile, countless small businesses across the nation close their doors. I’m (almost) speechless!!!! 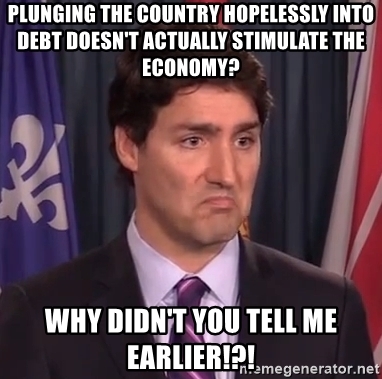 How about the $600MM gifted to the media who’s union vowed to destroy the Liberal’s competition? Not to mention the continued yearly $1BB donation to the state-media organization, the CBC. Or the private gifts of our tax dollars of $200MM to Loblaws (associated with Weston), or the $370MM to Bombardier “to save jobs”. Bombardier promptly laid thousands of workers off after that little bonus, courtesy of you and I. Not surprising – both Weston and Bombardier, along with SNC (the subject of Trudeaus second Ethics charge) have disproportionately contributed to the Liberal party. A coincidence, of course.

All of this, yet when asked about helping our Canadian war veterans – the claim is that the government cannot afford to help???

There’s no new money for medical system improvement (longest wait periods in the developed world, becoming longer). But we have the money for select private corporations. Recently, the Fed gave $200MM to Gateway Casino.

Elections B.C. political contribution disclosures show that Gateway Casinos & Entertainment donated $218,902 to the BC Liberal Party between 2015 and 2017, and that the Great Canadian Gaming Corp. had donated $127,413 during that period. Another coincidence, of course.

You just bought a car

Not long ago, Trudeau, along with Ontario’s Premier Doug Ford, gifted nearly $600MM of your tax dollars so Ford Motor Co. could build electric cars, then sell them for $5000 less than their sticker price. Gee, that’s nice. This is using your share of the tax bill to pay for a car that you’ve not authorized, and may not purchase. Its a cost born by you and I – benefitting only those who actually buy the car. Oh, and the corporation, of course.

Question: What right does a government have to spend our money so indiscriminately?

There is an incorrect assumption by citizens in Canada that the government “knows best” as to how to spend our money. This assumption fails to recognize that the knowledge of one small group of politicians cannot possibly match the knowledge of millions of citizens. Citizens from all walks of life form a collective skillset and intelligence that exceeds a small group of elitists.

A politician cannot, and should not, be free to act outside of basic society needs without some type of consultative process. 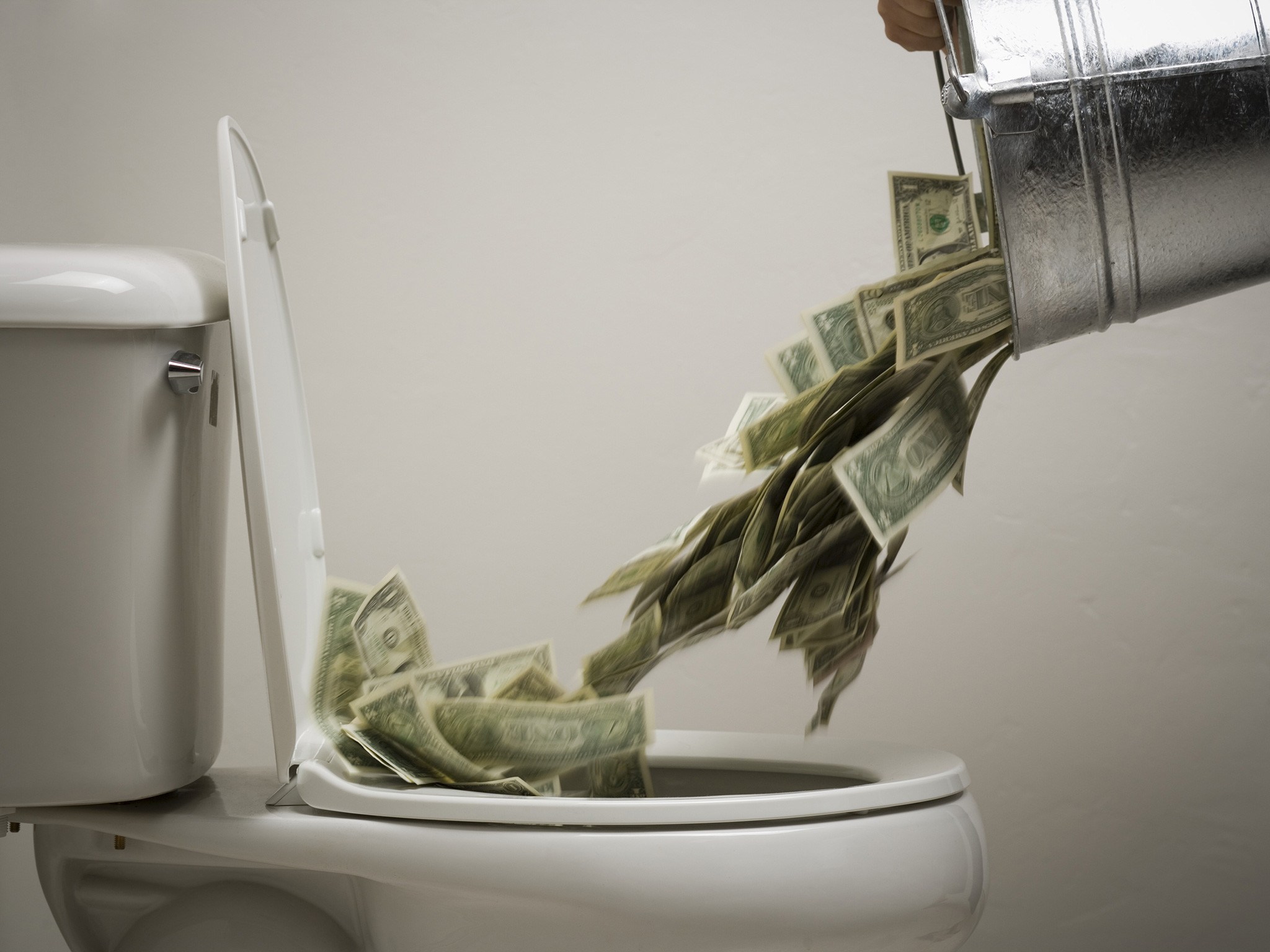 Here’s the tax returns we are used to: 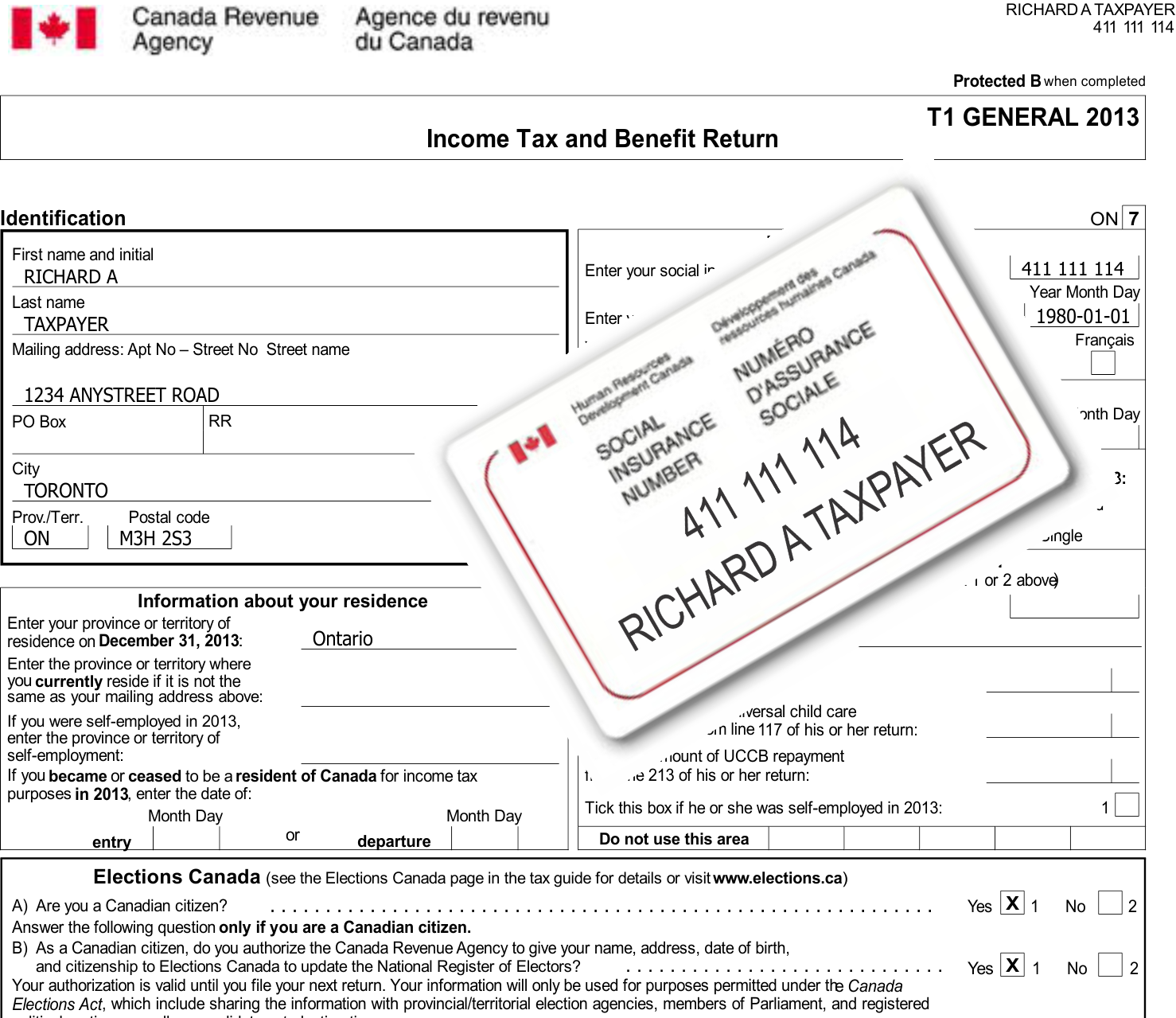 The new tax return – for kicks and giggles

What if your total tax bill this year was (for example) $30,000. Wouldn’t it be great if it was itemized? For fun – lets make an imaginary breakdown that might be reported on your income tax return.  I truly believe I am massively understating the discretionary figures in this example.  Of your imaginary $30,000 tax bill, you receive the following financial statement: 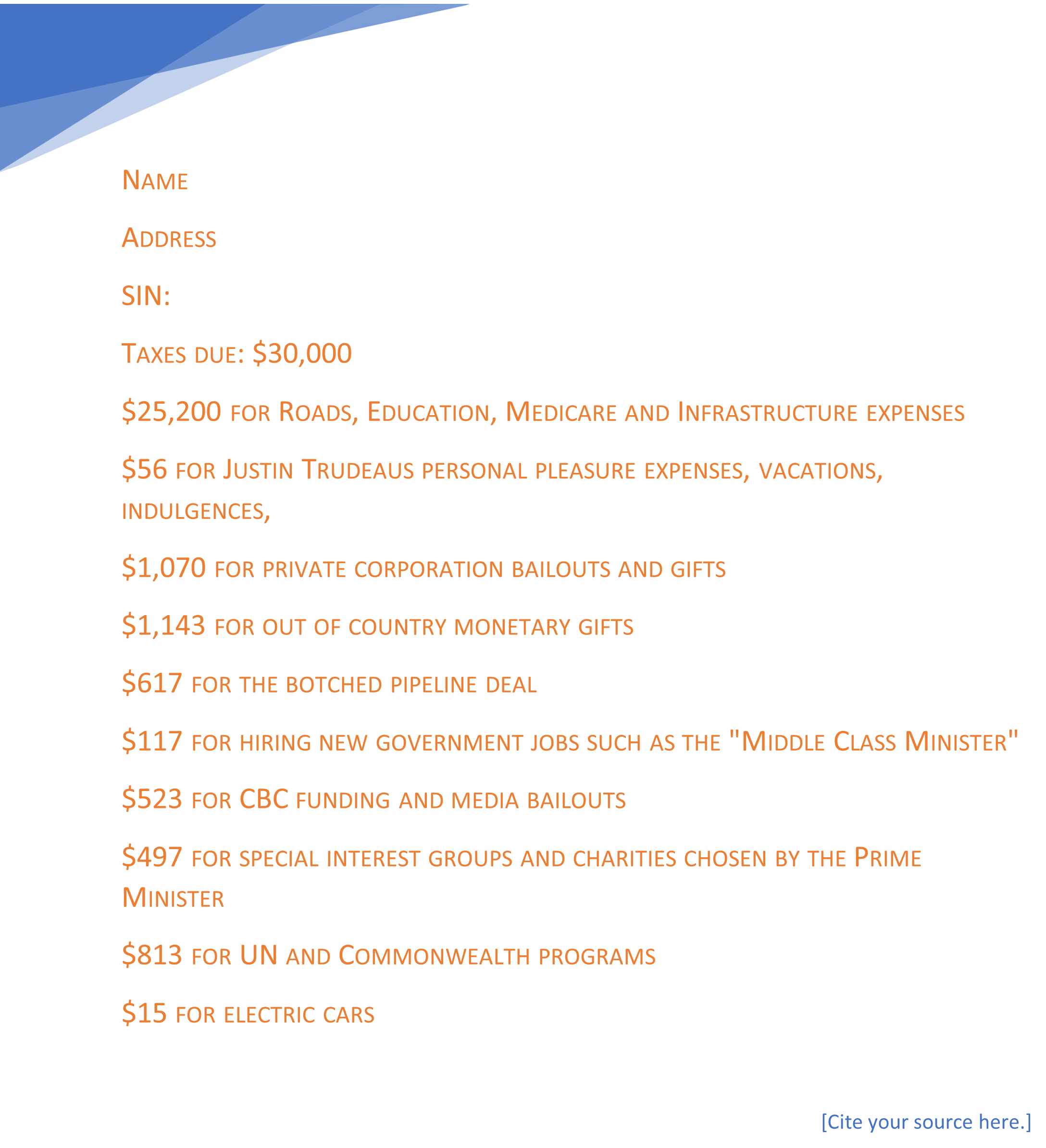 Here’s a question for you: Were we to pay our taxes after an itemized report like the above, how much more attention would you pay to Justin Trudeaus spending decisions?

Let me ask you another question. If you received this tax bill, and knew that a good portion of  your money was being used for expenses that you did not endorse or agree with, how would you react?

What if  our personal net costs of government expenses were presented to us every year in a fully disclosed manner for scrutiny? What if an independent audit disallowed expenses that didn’t fall into ‘allowable expenses”. You know, like personal benefits to an MP? Those expenses would be paid back by the bad guys who tried sneaking them through…like any tax cheat has to.

What if  taxes were used only for what they are meant to cover – expenses like roads, education, police, fire, Medicare, etc? In this way, Justin would be held to the same standards as a business is.  He’d have to pay for his personal pleasures just like we do…with his OWN money! BTW – this would go for all politicians.

Perhaps you like the idea of helping an MP upgrade his cottage. Here’s how you could do it without infringing on the rights of your fellow Canadians! Picture a new twist on the donor portion of your drivers license. Here’s what we have now: 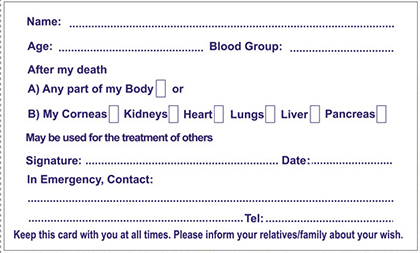 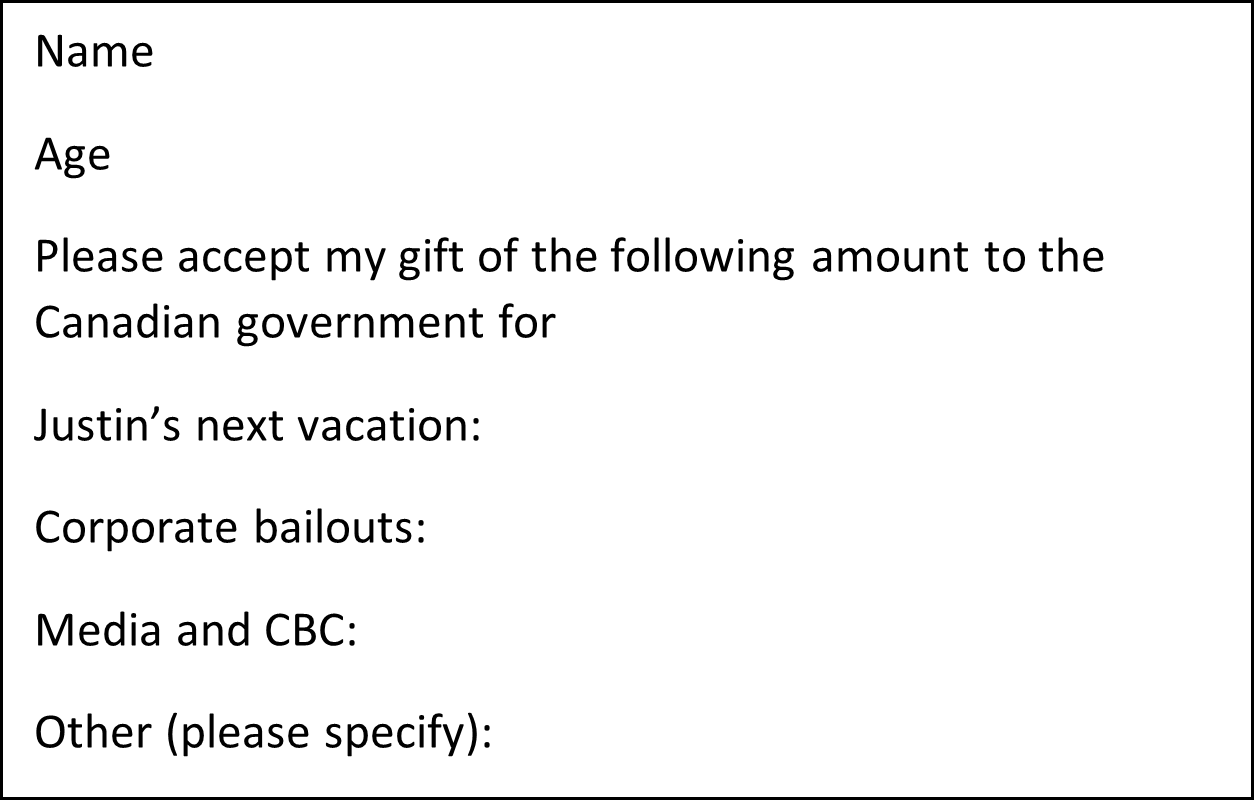 The truth behind the American revolution was not that the “rebels” rejected taxes. They rejected  taxes that would  go to a king with no benefit to themselves. They rejected having their money taken and spent without direct and fair representation of how that money would be distributed. Sound familiar?

I reject the concept that Justin Trudeau and his government have the “right” to use our tax dollars for anything that extends beyond law and order, military, health, education and multi-use infrastructure. Further: Charitable contributions to foreign entities, private corporations, special interest groups, etc. should be  by choice of the individual. Like my proposed donor card.

I believe that even the most die-hard Justin fan would reconsider the expenses this government has placed upon them if it were itemized on their tax returns. Moreover, I believe that even his most loyal voters might not be so willing to write that optional cheque (per my proposed donor card) for personal chefs and bee farms. Nor for foreign nations, and corporate donations. But…. if they did wish to gift Justin some of their money to help buy that new zipline at the cottage, or to buy Loblaws some refrigerators, then what the heck. Its their decision!

We must reject Justin Trudeau and his “right” to use our tax dollars beyond their original purpose.

Justin Trudeau has crowned himself king, and then stole from the people. It is time for a Canadian revolution. 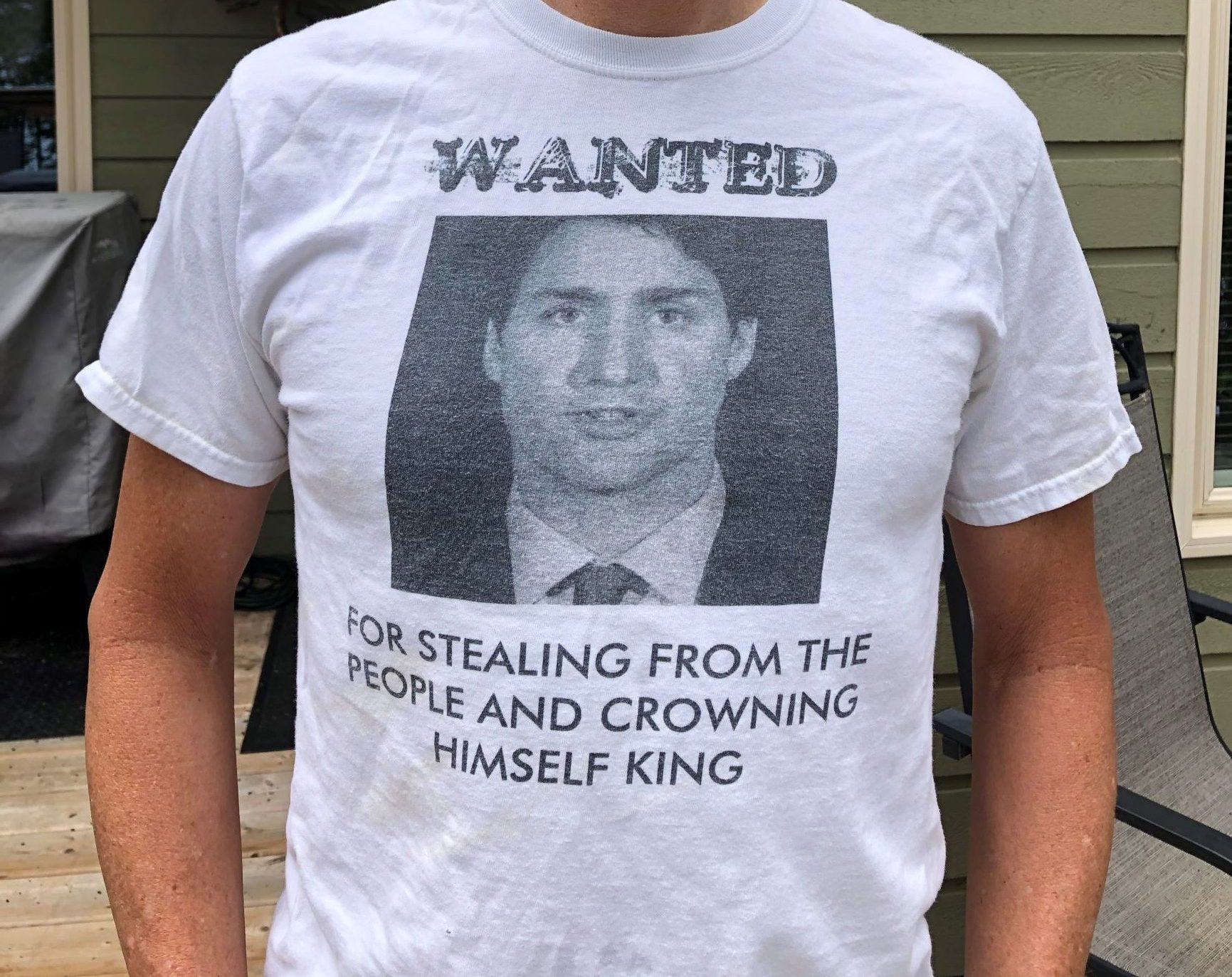 “I believe in fiscal responsibility, and I, quite frankly, I think Liberals who believe that the government should be doing things well and should be doing some certain things are more motivated to therefore do them well, do them responsibly, not going to massive deficits the way certain other governments who have been less motivated to deliver good government have” – Justin Trudeau on CNN’s Foreign Affairs show in 2014 when campaigning on a $10 billion deficit.