Before getting to today’s prime subject, the US’s ISM PMI (Purchasing Managers Index) came out lower in the latest report, albeit “less bad” than expected. It’s early into the economic cycle, and the impact by the virus will certainly push this and other economic indicators go from “less bad” to “more bad” over time. Sentimentrader notes that when economic contraction begins (ie, now), it’s about a 50/50 chance for a higher market in the next number of months. But a year out, markets are typically higher.

One other note: I always publish the results from my Bear-o-meter near the beginning of each month. I’ll do that either Friday March 4th or Monday the 6th. I wanted to address an elephant in the room today.

WARNING: POLITICAL RANT. SKIP THIS IF YOU PREFER TO AVOID SUCH TOPICS

Be warned. Fans of the Canadian PM are not going to love this message. Please skip this blog if you hate my political rants. The price of admission to this otherwise financial-information blog is my occasional rant. If you don’t like it, move on and revisit next week when I post the Bear-o-meter reading. I feel something needs to be said, and I’m saying it. Its my opinion, just like that of the market. You don’t have to read it, or like it. I don’t have annoying flash-ads etc to support the costs and time of producing of this blog. My reward is the occasional rant.

Also–Please don’t bother post “better than Trump” replies, as that has nothing to do with Canada. This is like saying “better than Putin”. Neither will run for our leadership, so their policies and personalities are irrelevant. I will not be talking too much about the current response to the pandemic. Instead, I’m going to address the prior moves of Canadian consumers, and government – and how those factors set our country up for failure. I’ve mentioned this so many times over the past two years, but the current situation brings it into sharp focus.

There’s a reason behind the falling loonie, and the relative underperformance of the Canadian market. Perhaps some agreement or policy is pending to support oil prices in the coming week or so that might cause a bounce off of the 2016 support lows. But we’re down there for a reason. 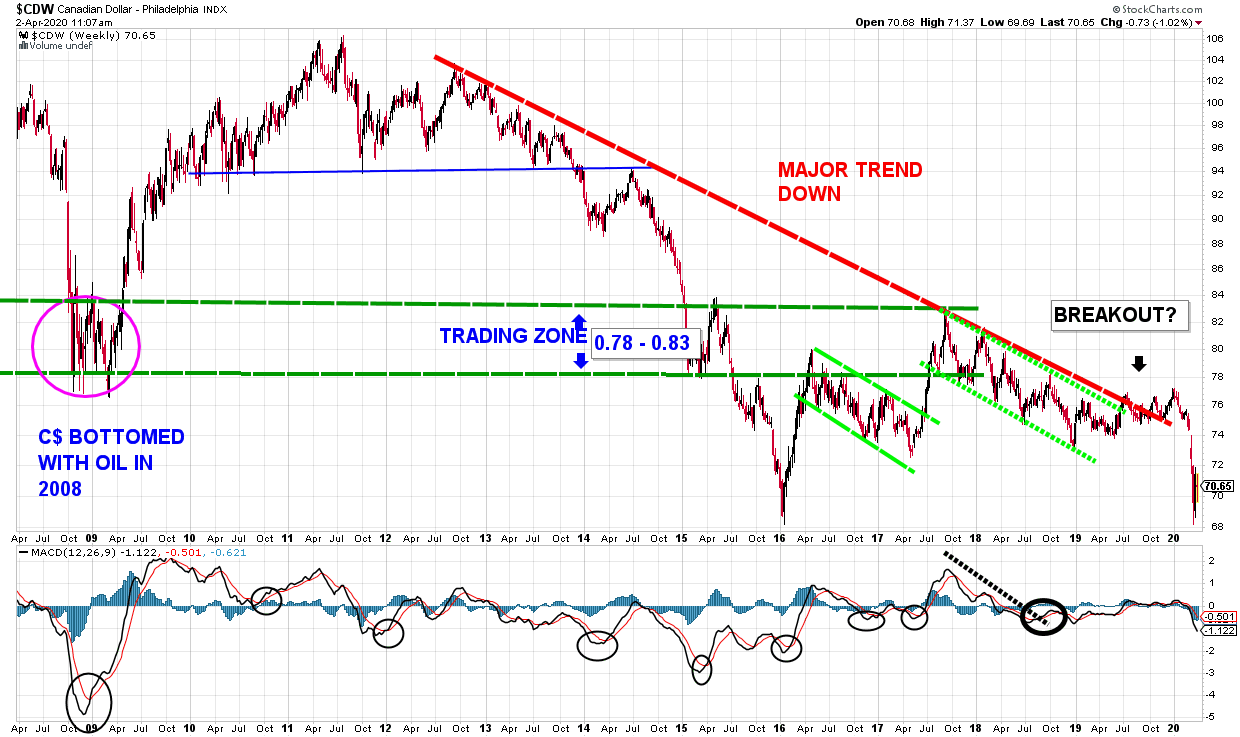 Back in January, I wrote a blog addressing my bearish outlook for the Canadian loonie. Actually, I’ve been bearish on the loonie, and the Canadian economy, for some time. Do a blog search here and you’ll see lots of input. Boy, talk about wishing I wasn’t so darned right. Many factors have driven the loonie down- and added to Canada’s woes within the perfect storm that the world is now facing.

One was the government’s pressure on our oil industry – forcing many players (including Warren Buffett himself) to vacate potential and current investments. Some companies moved Canadian operations to the more cooperative US environment. Then along came the Saudi/Russia supply dispute, driving the final nail into the coffin. Witness the US’s positive proposal to help the current situation (current proposal is to tax imported Saudi oil to support buying their own industry’s oil). Compare this to the 50% increase to the carbon tax now being imposed by our government. Really? Now is the time to put even more pressure on pricing and our producers? For so many reasons, this is wrong.

Next, the Canadian consumer has held the not-so-prestigious distinction of being the most leveraged consumer in the developed world. I posted this chart in the January blog. Buy that $1.5 million dollar condo with all the amenities, and buy two $70,000 Audi’s to drive to work in, then max  out the credit card on all the other toys. You can pay it off some day. Canadians like to paint themselves as prudent, while viewing Americans as brash and  consumptive. The reverse has been true. OK, the government will help these enthusiastic spenders through the pandemic (raising our already high deficits further). But that personal debt shall remain–and perhaps many of those good jobs that inspired the two Audi’s will be permanently wiped out. What happens to the recovery when the government stops the support of our over leveraged citizens? 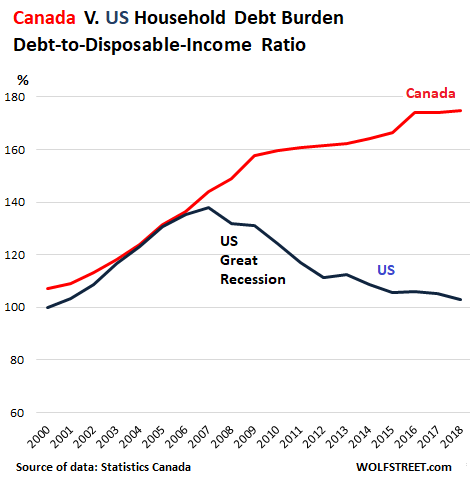 Our government’s spending on non-GDP accretive (ie money-wasting) projects was no better than our citizens. Wasteful spending has driven our deficits from flat in 2015. Justin Trudeau bragged that his government made sure over the past several years to have money set aside for a rainy day. This is complete BS. The government has done the exact opposite through record spending increases, driving the deficit even when the economy was growing… Much like our spend-happy consumers. Gifts of refrigerators (Weston), wasteful bailouts of repeat-failing companies (Bombardier), and sending money overseas to bid on a UN seat have contributed to our deficit. This, when our prime industry, energy, was in need of pipeline and infrastructure investment–but no money for those guys. They don’t vote Liberal. Political motivation for spending comes into question. 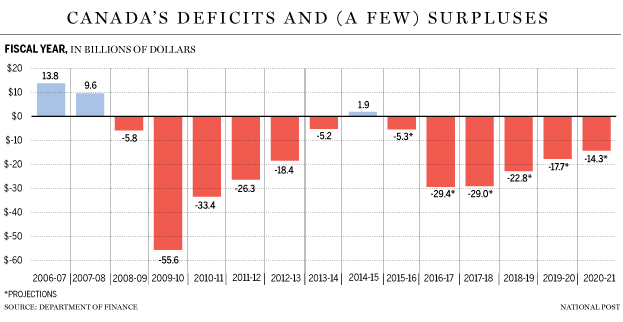 Yes, now we must help workers and businesses stay afloat during the coronavirus crisis. But we would have been in a much better situation to face this crisis if we had eliminated the deficit and prepared for the next recession, as Philip Cross (former Stats Canada economist) noted in an interview with Maxime Bernier (I post the link for its value, not as a political endorsement, and encourage you to view it).

As Canada struggles with job losses and an an already over leveraged consumer, the Canadian government attempted a very scary Marxist – like power grab to enable carte-blanche spending AND taxation with no opposition for 21 months. Thanks to the Conservatives for kiboshing that one. Now, the government wants to give themselves another raise (the second one since 2016), in an environment of massive job losses throughout the country. Thanks again to the opposition (all opposition parties ) for at least attempting to kibosh this one as well. Even the bought and paid for media can’t ignore these grabs.

OK. Got that off my chest. Back to our regular programing in the next blog.