The Bull market is dead! Long live the bull market!

According to sentimentrader.com – When the S&P’s weekly RSI momentum went from oversold to normal (>45), the S&P often struggled over the next 2-4 weeks. Many post-crash rallies are followed by some form of a pullback, so this makes sense. Even “normal” corrections (ie not crashes), such as those I’ve highlighted in the chart below  (2011 and 2015), experienced “RSI head fakes”. That is, a rally from an oversold RSI level, followed by a move back to around “50”, then a pullback. 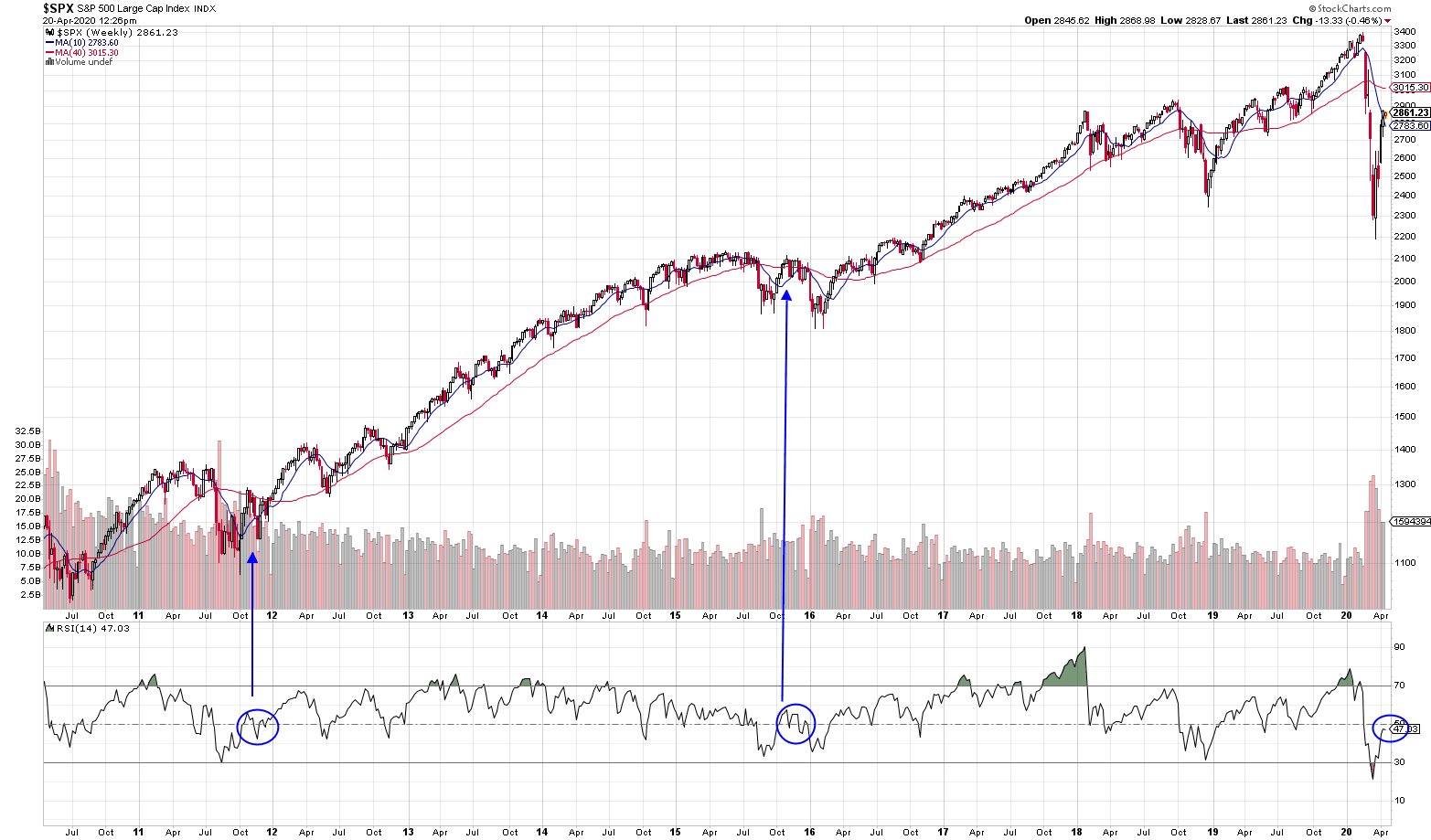 No one would argue that we are entering into a recession, thanks to the COVID-19 virus. The chart below from Raymond James research shows us that markets have (in the past) taken at least 21 months to fully recover during such periods. Hopes of a neartermed rebound to the old highs set in February may be misplaced.

Here’s a chart for the bears. The S&P 500 looks to be in an expanding formation. That’s not a good thing, given that it is considered a classic bear market pattern that can lead into further breakdown. So, we should watch and worry, particularly if the lower level (March 23rd’s low) of 2300 is broken to the downside…. although in my opinion, that is unlikely.  The washout in March was extreme, leading me to believe that we have seen the bottom in prices. And yet, it makes little sense for that low to be a “one and done” situation. More realistic is a re-test, or a test of just above that low point. That is, should the market follow the typical complex bottoming process.

Interesting to look at breadth lately. The Dow transports (black line) are NOT diverging against the industrial stocks. However, they are lagging, big time! Industrial have recovered over half of their losses since February. Transports have only recovered about 30% of their total losses. This indicates a weak recovery at best. Possibly a bearish signal.

Dow theory aside, many other breadth indicators that I watch, such as the NYSE New high/low indicator, and the various “percentage of stocks above their X-days moving averages” indicators are back to neutral. This implies that breadth, while not great, is not bearish anymore. Below is the updated chart showing the % of stocks above their 200 days SMA’s. As noted on my blog from April 7th, the indicator often confirms the end of a bear market when it moves through the 15%, then 20% barrier as I have noted (horizontal red lines) on the chart below. The SPX now has 26% of its stocks trading above their 200 day SMA’s. Not at all great breadth, but, per my notes on that blog, the recent increase of stocks above their 200 day SMA’s indicates that we may have seen the bottom (which could be retested…) of this selloff.

April is the best seasonal month of the year. Its actually been pretty much on that pattern, given the rebound this month after the March decimation. So…if you want to follow seasonal’s, along with the neartermed notes regarding momentum patterns per sentimentrader’s notes, or the historic tendency for markets to almost never “V-reverse”– you might want to think that we are in for another pullback come early spring. Breadth is improving. So any correction may not be long.

I’m in that camp of investors who are holding some cash (about 30% in our case) to take advantage of that potential.