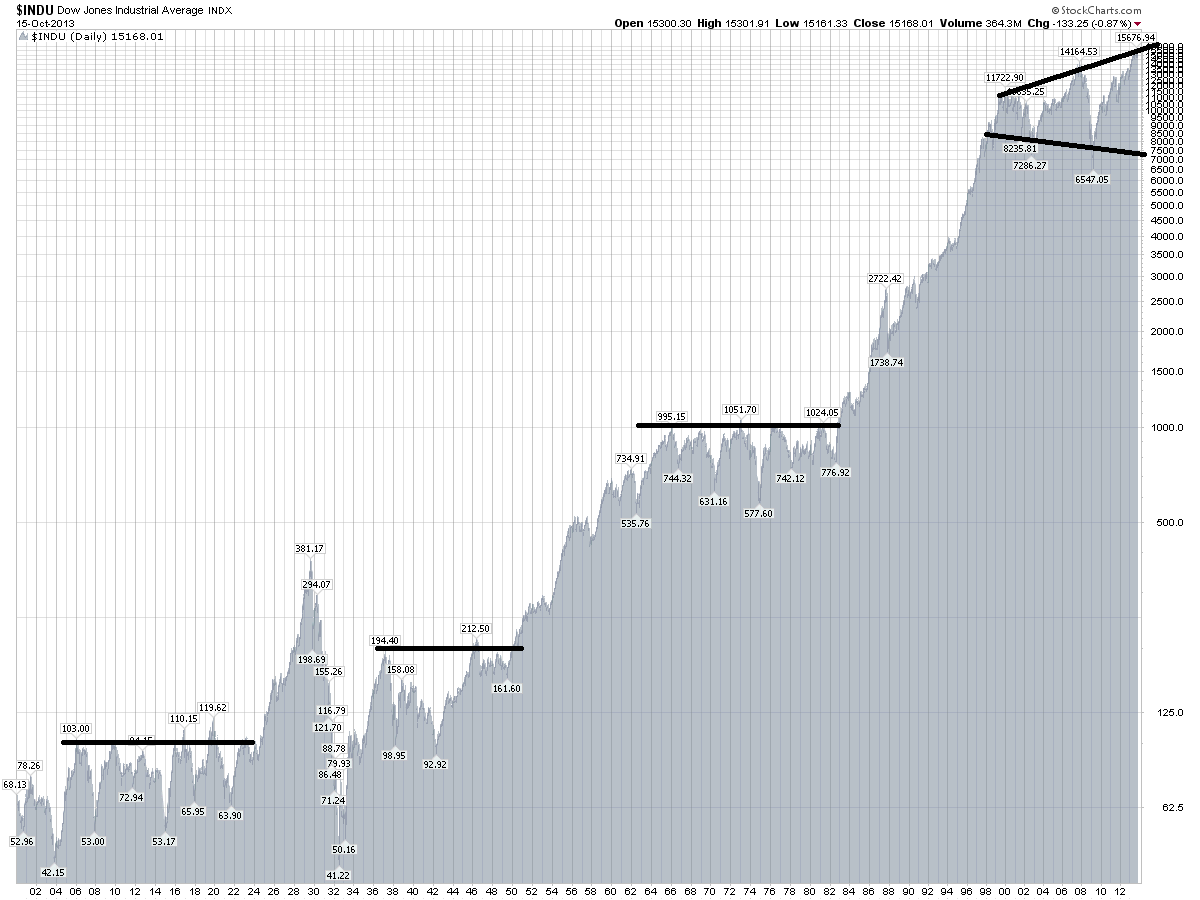 I promised a look at the “big picture” in an earlier blog, so here goes.

The long termed picture presents a bit of a puzzle right now. As you will see on the long DJIA chart above (1900 – present), the Dow has been through 4 major consolidations over the past 113 years. The first three were decidedly sideways periods, all had a defined ceiling overhead over multiple years. Investors made little on their capital beyond dividends in those years. The most recent “lost decade” demonstrated more of what might be an expanding formation on the DJIA. This formation is usually considered bearish, given that it implies ever-increasing levels of volatility. So too has the very broad NYSE composite index—recall though that the NYSE composite is comprised of a wide gambit of market capitalization, so it is a somewhat different animal than the Dow. Nonetheless, it gives signals as to the health of the broader markets overall – and it’s most certainly been entrenched in a long termed expanding pattern. See chart below.  So – if expanding patterns are bearish, that means we should all run for the hills, right?

The problem with assigning a blanket “bear market is coming” prognosis to the US market right now is this: The broader large-cap S&P 500 index hasn’t shown the aggressive expanding formation noted on the DJIA above over the past 13 years. Instead, the S&P has been largely flat over this period (yes, there was a nominally higher high between 1999 and 2007 – but I discount this <2% difference). Recently the S&P broke out from its sideways trading range.

One of these charts is not like the other

They didn’t confirm each other in the ‘70’s either – although it was the Dow that was flat, while the  S&P formed an expanding pattern. The ’65 – ’82 expanding formation on the S&P 500 ended with its largest decline of that period–in 1974. After a few more years to recover, the 1982 – 1999 bull market was born. Perhaps the similarly massive 2008 meltdown completed the DJIA expanding pattern that formed during the past 13 years. If patterns repeat, then we should be entering into a multi-year bull market at this time. 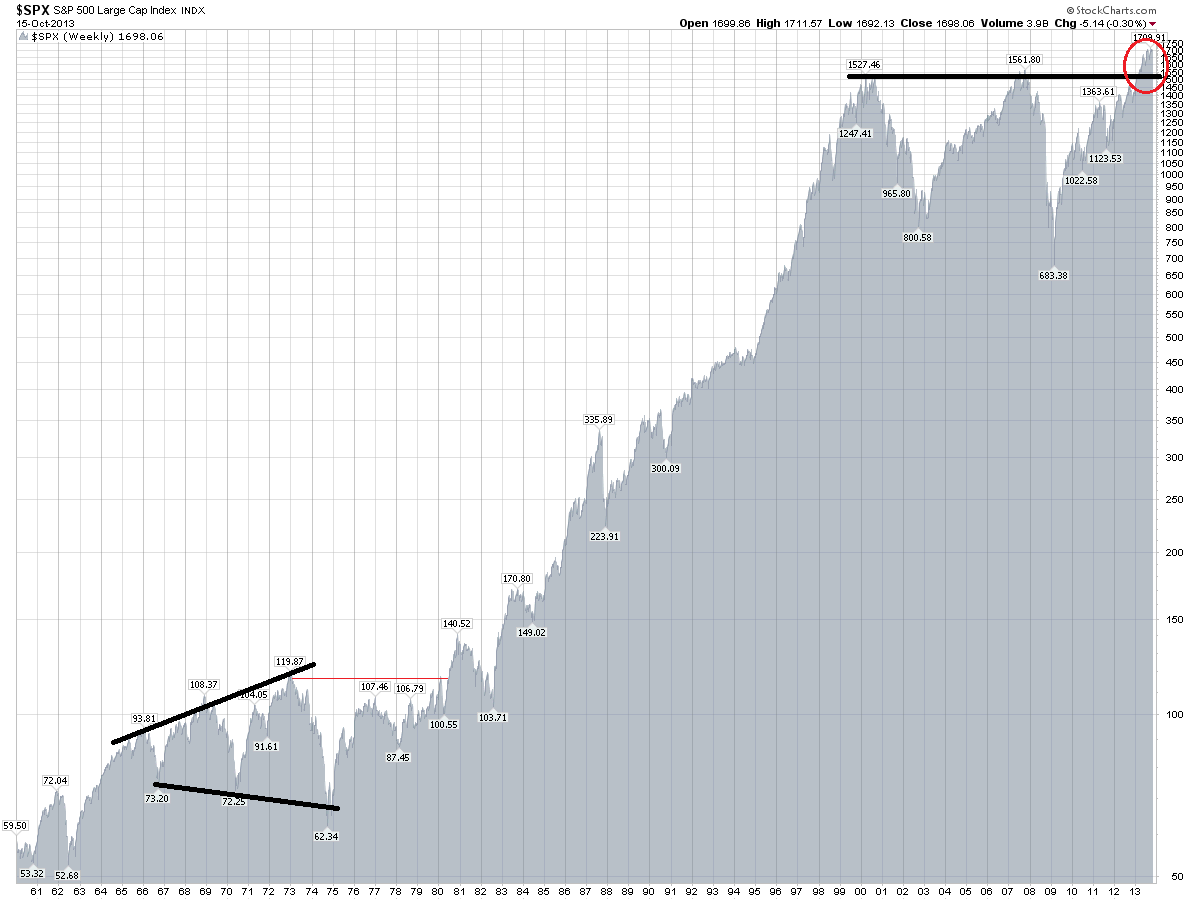 So lets now take a look at the mid-short termed view. My view on the broader markets are for a relatively small 3-4% near-termed pullback, followed by a likely continuation on the bull trend (see Monday’s blog).  Perhaps the remaining upside for stock markets will be more tepid in the coming months, but I do believe markets still have a little left in them yet.

Yes, we are due for a normal (i.e. not of the 2001 or 2008 magnitude) bear market correction sooner or later. Below is a chart showing the past 13 years on the S&P 500. You’ll note the rhythm on this chart (cycle period) is about 5-6 years. If you have heard me speak at a conference before, you will know that I do not get too tied up in picking the exact dates where a cycle is due to trough. Instead, I note a rhythm to the markets, and the current rhythm appears to be a tendency for troughs to occur about every 5-6 years. If we measure from the last trough in 2009, a 5-6 year period would suggest the next bear market bottom in 2014 or 2015. This suggests a market peak either very soon (the coming months) or later in 2014.

In summary, I believe that the very big picture is bullish for the US markets (perhaps less so for Canada given the commodity exposure). The recent lost decade, which I accurately predicted way back in 2001 (visit www.valuetrend.ca, click on the button at the bottom of the site to read my article published in January 2001) is over. I believe we are in a new big-picture bull market. However, we are due for a mid-termed bear market correction beginning sometime in the next year or so. Before that time, I believe that there is time for one last dance at this party before it ends.

I’m on BNN’s popular MarketCall Tonight show on Tuesday November 5th at 6:00pm. Feel free to phone in with your questions on technical analysis during the show. CALL TOLL-FREE 1-855-326-6266. Or email your questions ahead of time (specify they are for Keith) to [email protected]

Be sure to mention that you read my blog when you call!

And BTW—thanks for the comments – they do help inspire the topics that I post, so never be afraid to add your two cents worth. I read them all.