The best way to trade silver

I received two questions about silver when I was on MarketCall last week, and have also been asked on this blogspot for my view on the metal by readers. When on BNN, it’s always a quick take when answering a question—it’s pretty hard to do a full analysis on anything when you have 2 minutes to do so! So us technical types generally have to recite what we know of the seasonal and sector patterns, and then get right into some basic trend/formation analysis for the security. Given the interest in silver by investors and traders, it probably deserves a more stringent coverage. So, here is my two cents worth on the subject:

Starting with a nice, clean weekly chart above, we can see that silver has recently struggled to break through significant overhead resistance (former support in 2011) at around $35. Seasonal influences can also be a bit soft in October for silver, which may be a factor in the near-term.

If we turn to my rather noisy looking daily chart below, there are a number of signals that suggest some downside potential for the near-term.

A pinching of the Bollinger bands – as seen on the chart –  can imply a change in direction. More importantly, note the significant divergence and downtrend of RSI and stochastics momentum oscillators recently. Silver made slightly higher highs while these momentum indicators began an obvious and aggressive downtrend. That’s not a good thing, especially when combined with a Bollinger squeeze. The metal remains above its 50 and 200 day MA’s (not shown on chart) suggesting the bigger picture is fine. A pullback into one of the support levels shown on the chart (green horizontal lines at $33, $31 and $29) may be possible- which would break the 50 day MA. 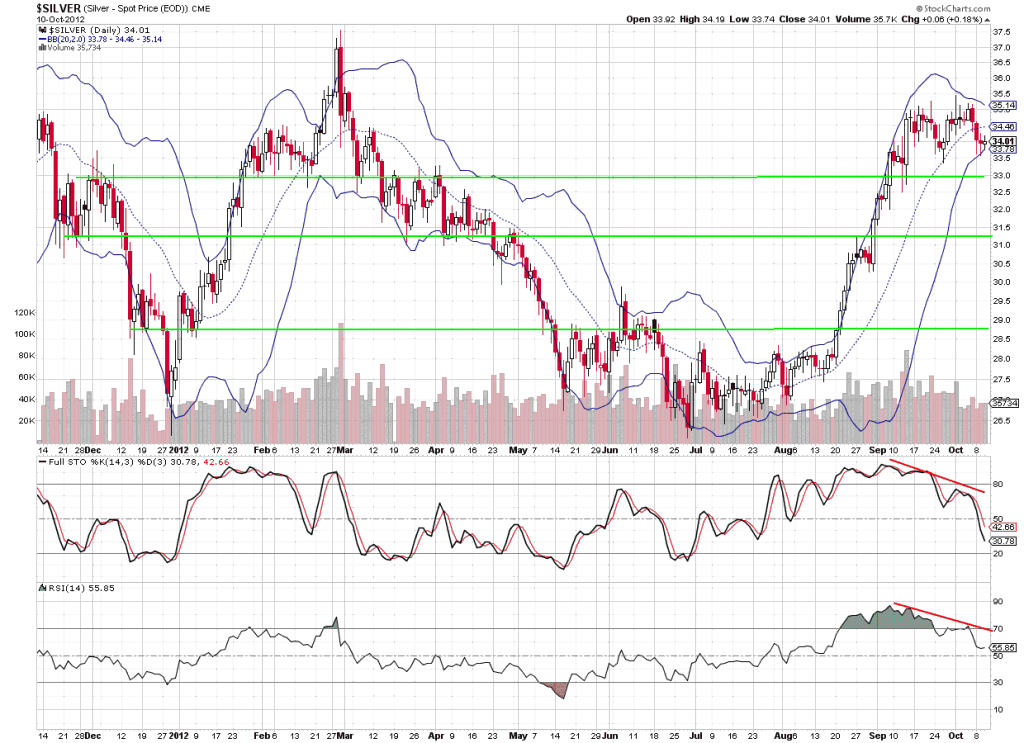 My conclusion when viewing silver is similar to that of gold—i.e. let it settle back, and re-evaluate any new purchases if the charts look good in a month. For now, I’d be a bit cautious.

Watch Keith live at the World MoneyShow in the comfort of your home or office!

The MoneyShow, where I will be appearing next Thursday October 18th at 3:45pm at the Metro Toronto Convention Center, has launched a pretty cool feature this year. You can register ahead of time to watch the show on your computer.