Home / The best way to buy and sell stocks

The best way to buy and sell stocks

Limit Your Risk Keep Your Money

At ValueTrend, we employ Technical Analysis for the identification of the market’s Phase. I covered some of the basic factors in understanding technical analysis, including phase identification, here

We also employ Fundamental Analysis, via the expertise of resident fundamental Analyst Craig Aucoin, to ensure that the positive signals that we receive from a technical buy signal are indeed likely to be sustainable. In today’s blog, and video, I’d like to use the chart of Apple (AAPL-US) to illustrate past buy and sell signals. By following the most important patterns and indicators that I use – in combination with a logical fundamental evaluation of a stock or a sector – you can achieve above average success. Our ValueTrend performance is an indication of the effectiveness of this system – please feel free to hit the “performance” tab for our equity platform above to see our results.

Here are the steps we’ll be looking at today:
1. Phase identification
2. Trading with the phase
3. Using moneyflow and momentum oscillators. 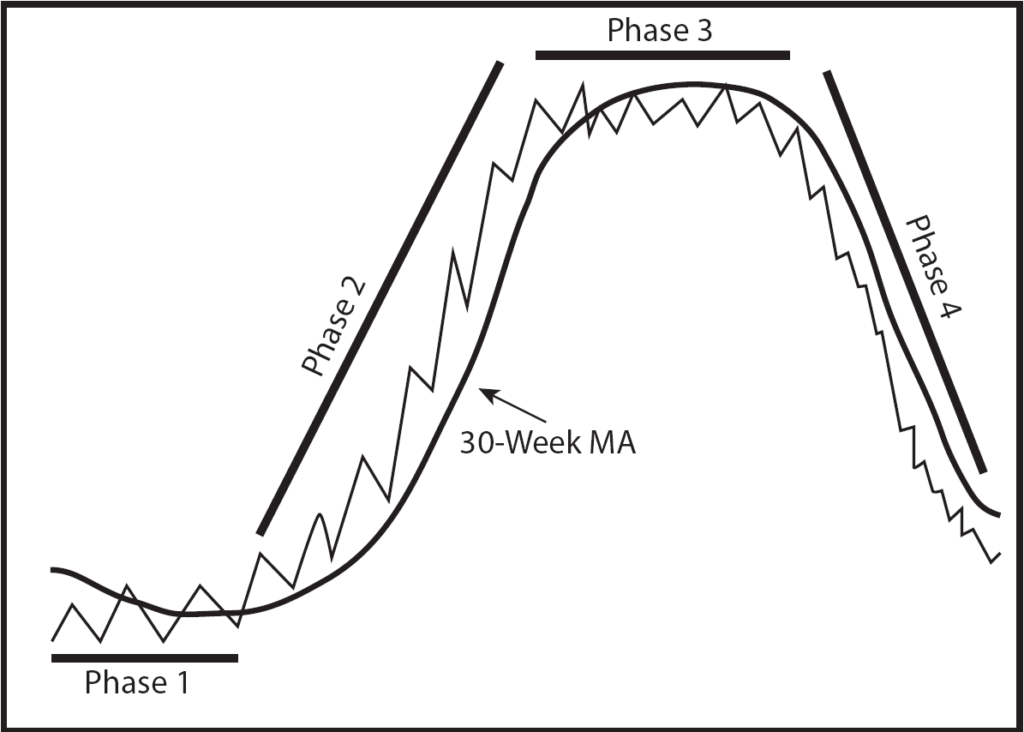 Trading with the Phase

The most important thing to understand is that you want to buy after a breakout from a Phase 1 Base, or on a test of a trendline within a Phase 2 Uptrend. Take a look at the AAPL weekly chart below. Back in 2011 (left side of chart) this stock was moving sideways—this could probably considered more of a consolidation than a true base –given that it was above its 40 week (200 day) moving average (MA). Whatever the case, new investors could have bought on the breakout from that minor base after it proved to be legitimate by sustaining above the June high for more than 3 bars (3 weeks).

A Phase 3 Top was confirmed in December 2012 by a break of the 40 week MA, a break in the former up trendline, and a lower high (peak) and lower low (trough) that same month. Volume declined as the topping pattern formed.

The stock declined from the $70 neckline to $50  after those signals. Note the rising volume as the new trend began.

A new Phase 1 Base developed during the first half of 2013 as the stock refused to make either lower lows & highs OR higher highs & lows. A Phase 1 Base is a state of trendless volatility, and AAPL illustrated this perfectly from January to July of 2013. Volume declined during this base, which is typical.

Suddenly, August of 2013 saw AAPL break out through its technical lid of around $64. A brief spike of volume supported the move. The stock moved above its 40 week MA again—right on schedule! AAPL has been in a Phase 2 Uptrend, as illustrated by rising peaks and troughs and no break of its 40 week MA  since the breakout in mid-2012. The trendline I’ve drawn supports this fact. 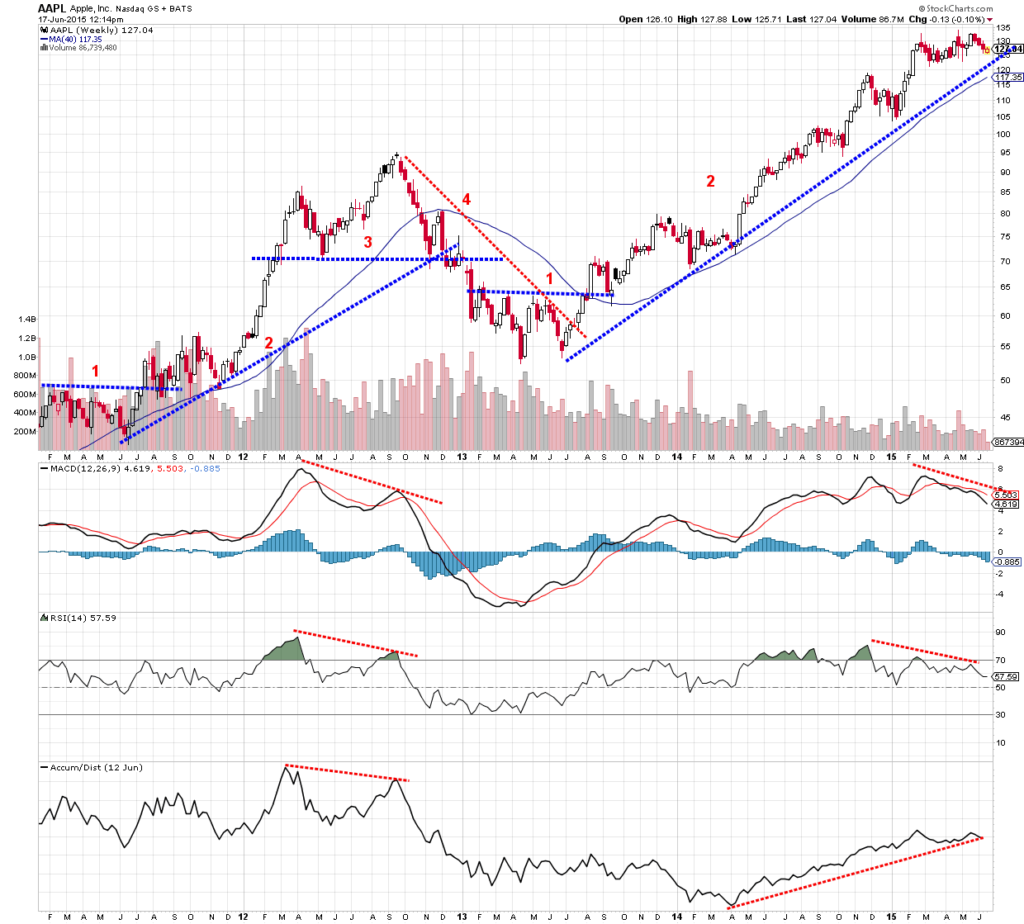 My favorite way of tracking the flow of capital into or out of a security is via the Accumulation/Distribution line. This line tracks the volume on a stock, and applies a positive or negative value according to whether the stock moved positively or negatively for each bar on the chart. The position of the close relative to the open determines the multiplier for this indicator, and each day is plotted cumulatively – adding or subtracting to the line. As such, it’s a fantastic trend indicator to see if money is flowing into or out of a stock or sector or market.

Momentum oscillators have nothing to do with volume. They are all about movement and velocity. If velocity is declining, a momentum oscillator declines. And vice versa. You can use these oscillators to offer clues as to overbought or oversold conditions by looking where they are relative to their respective overbought/oversold lines. But my favorite way to use them is to check for divergences. If an oscillator is trending opposite to the direction of a stock-it can offer clues as to future movement. In this way, momentum oscillators are both good short termed timing tools (overbought or oversold) AND long termed leading indicators (divergences). I’ve chosen to focus on Wilders Relative Strength Indicator (RSI) and the Moving Average Convergence Divergence indicator for this exercise. Both are good mid-long termed oscillators that are especially useful if divergences occur.

Let’s apply some of my rules using these indicators to the AAPL chart.

The Accumulation/Distribution moneyflow indicator at the bottom of the chart shows us an unusual divergence between AAPL’s rising price peaks in the first half of 2012 and the declining peaks in positive moneyflow. This, in conjunction with divergences in MACD and RSI gave some pretty solid support to our prior chart formation analysis of a Phase 3 Top in 2012.

The Phase 1 Bottom formation, and breakout into a Phase 2 Uptrend was confirmed by rising MACD and RSI oscillators from oversold positions.  Interestingly, moneyflow did NOT support that breakout! This was a potential warning sign—but it proved a false alarm. This is why we always define our trading decisions by phase and trend first, using all other indicators as a secondary factor. We may have decided to only take a half position on AAPL based on the lack of positive moneyflow in late 2013. By early 2014, we could have increased our position in AAPL as moneyflow finally improved.

As you can see on the chart, moneyflow continues to be bullish for AAPL. However, we are seeing divergences in MACD and RSI for AAPL at this time. Should we be selling if we own the stock? The answer is, NO – not at this time. The divergences may be a false signal. Ultimately, we should watch for a break in the trend and a break of the 40 week MA. Conservative investors who have made a large profit on the stock could decide to reduce, but not yet eliminate this position based on the divergence warning – understanding that the trend is still favorable for AAPL.

Next week, I’ll ask my associate Craig Aucoin to write a guest blog entry for some of the fundamental factors that he looks for in identifying buy or avoid candidates.

Want more insights like these?
We are on a mission to help investors like you choose the 'smart money path'. Sign up for our newsletter to receive valuable insights that are available only to subscribers.   Beyond the blog – beyond the videos – get the inside scoop.

Get the Inside Scoop
Scroll to Top