The current US & Canadian governments are following a 3-step economic formula.

Back in the 2007-2009 recession/ stock market crash, the US Federal Reserve followed a similar path. Taken from BearTraps, I’ve reprinted 3 paraphrased quotes by the Fed from those years.

Notice the similarity? I was managing the 2008/9 crash with cash and trading strategies similar to how we are managing the markets right now at ValueTrend. I knew then, and know now, that government rhetoric is not to be trusted. Just look at the deceit and ethics violations coming out of the Canadian government during the past few years. I will be blogging on that shortly. The bottom line is- you have to think for yourself. You cannot trust the government to deliver the truth. I have been in this business a long time – since 1990. I’ve learned a few things, giving me an advantage over other less experienced investors. You have to live through these lies enough times to finally become a profitable skeptic.   This is why Craig and I did NOT fall for the “transient” inflation talk in 2020, and we are NOT falling for the “low inflation risk” talk right now.

Earnings growth expectations vs. the economy

I’m not a fundamental guy, and I’m not an economist. But I will leave you today with two charts worthy of pondering over.

The first chart illustrates earnings growth expectations vs. the average trend in growth. When considering the speed of the economic slowdown and coming Fed tightening, EPS estimates will have a long ways to correct lower. The chart below from BearTraps  shows earnings growth (since 1955) and estimated earnings growth (blue) for the SPX. Note the spikes in forward growth estimations coming off of the mean line – circled. 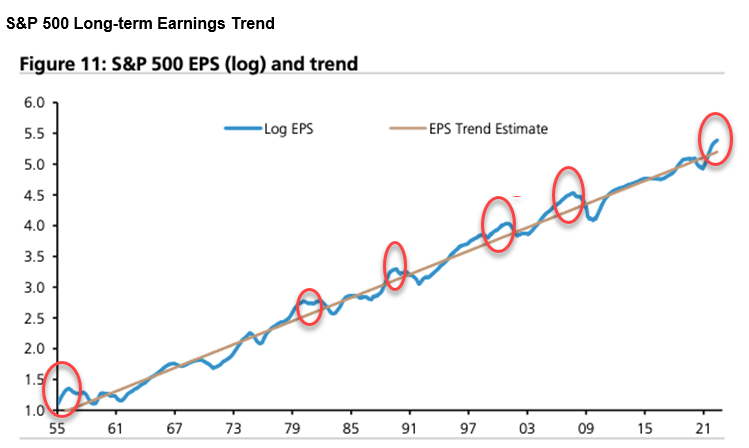 Note how such overly optimistic earnings predictions can often be a leading indicator for recession (grey bars) and unemployment spikes (blue line) in the chart below – I notated the above earnings spike periods on the chart below – courtesy Investopedia. These charts illustrate just one factor when attempting to predict the economy – but its food for thought. As said, I am not an economist, but I wanted to pass this tidbit from BearTraps (along with my own observations of the recession chart) along. 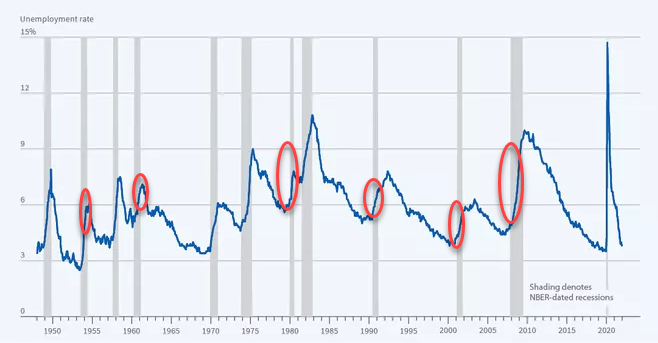 I expect to publish a new political rant this week. It was inspired by, as noted above, the unprecedented lies and deceit coming from the Trudeau government. They don’t just fib about inflation and recessions. In fact, the current Canadian government has a particularly bad history of ethical violations, propaganda, and deceit.  Young college kids like saying they are getting “triggered” when they hear something that bothers them.  I guess my “trigger” was the name calling, actions &  propaganda by Trudeau surrounding the truckers/freedom rally. True, the truckers were loud and overstayed their welcome – no doubt triggered by the lack of open communication from the elitist government. But the propaganda and totalitarian tactics surrounding the event are unforgiveable. Especially in the light of the less than perfect ethical history of Trudeau. If Trudeau wants to call others names, he had better take a close look at his personal, and family history. Its gruesome. People who live in glass houses shouldn’t throw stones. That’s the name of the blog.

I would recommend you avoid reading the next blog if you are disinterested in politics, or are a Trudeau apologist. There’s still a few of those out there, and I do not intend to enter into discussion over how we really should love him despite it all. I’ll return to the financial stuff next week.