I  noted  through several blogs in 2017 that the runaway upward trending market was unsustainable – and dangerous.

This almost complete lack of volatility in the stock markets was a dangerous pattern, likely to end with a thud . I have also noted on this blog that markets historically go through periods of volatility after bullish runs.

Admittedly, that run of low volatility lasted far longer than I anticipated. But, as our clients who have been with us for a while know – my approach is NOT to win by investing when conditions are risky. My strength is to win by not losing, and to profit when markets get volatile. It would appear that the time of volatility – which is where our unique approach tends to thrive  – has arrived. Now that’s more like it!

Take a look at the chart below, courtesy of Sentimentrader.com. The chart illustrates daily market swings. The horizontal line in the middle is the “0” line. A move by the graph above or below “0” represents the % daily move. Look at the 13 month period from November 2016 to January 2018. Note the tight moves contained within 1% on either side of the “0” line. That lack of volatility was an historic freak show. It’s never happened before! It was simply not normal, and it couldn’t last.

Because the exuberance did last so long, it set the market up for a potentially large decline. As David Wilcox once sang in his iconic song Bad Apple:  “ You need to eat a slice of humble pie. And the longer you wait, the worse its gonna taste!” . By the way, if this song doesn’t rock you, there is no hope!

Because the market acted so irrationally – for so long – there is a lot of exuberance to wash out of the markets at present time. As you can see on the sentimentrader chart above, volatility has increased drastically lately –note the big daily swings compared to last year.

I anticipate a continued rally on the stock markets for the coming weeks. The current choppy pattern bears resemblance to the pattern prior to the 22% pullback in the summer of 2011 – as noted here.

Should markets redirect into their corrective actions over the coming  summer  – I would not be surprised to see a return of the S&P 500 to its longer termed trendline. On the freestockcharts graph of the S&P 500 below, I’ve drawn a line from the first rally after the capitulation washout point of 2009, touching as many troughs as possible along the way. A test of that trendline suggests a downside target of 2500, or slightly lower. That could happen via a downward move or though a longer period of sideways stock action. 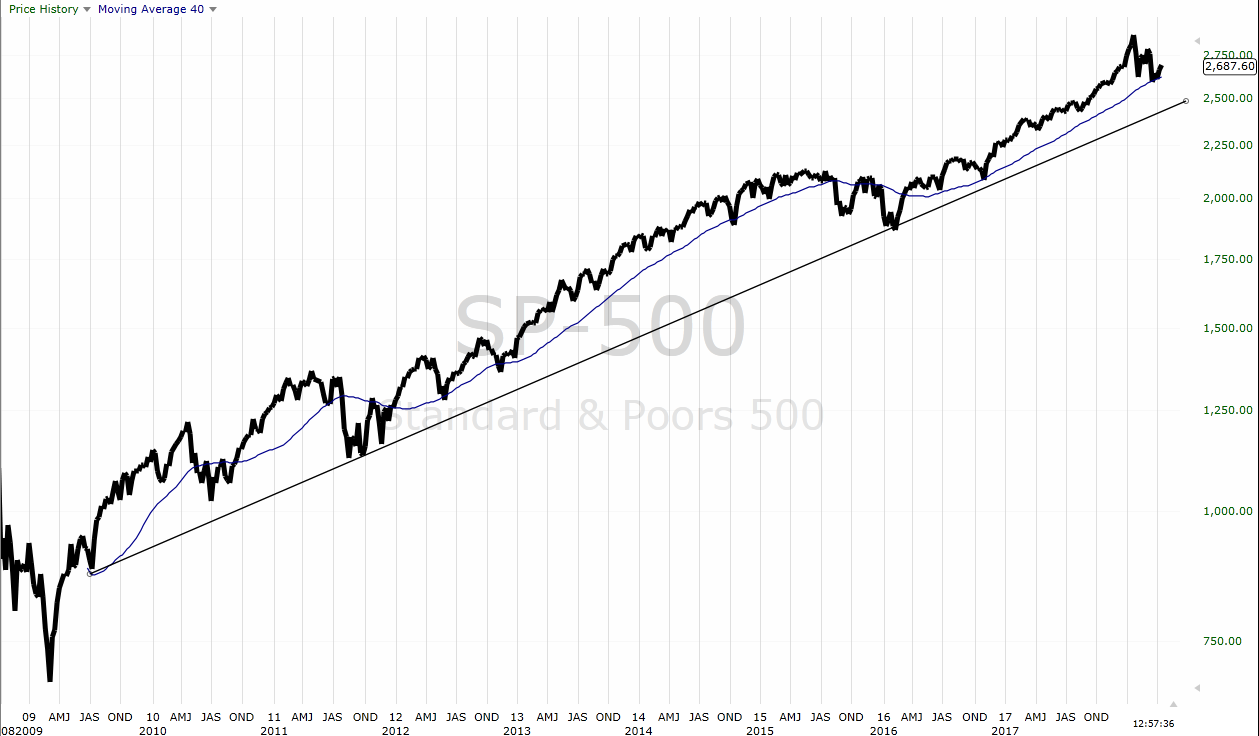 I will begin to raise cash again as the charts, and seasonal trends dictate. It is in this environment that we expect to reap the greatest reward by selling into markets as/if/when they show signs of weakening, and then redeploying the cash as/if/when markets present a new point of entry and lower stock prices. This highly active approach to achieving more predictable performance is our greatest strength, and it is what ValueTrend has been built upon. I believe that those who follow this blog have a similar philosophy, and it is my pleasure to share my thoughts with you to further enrich your personal investment process.