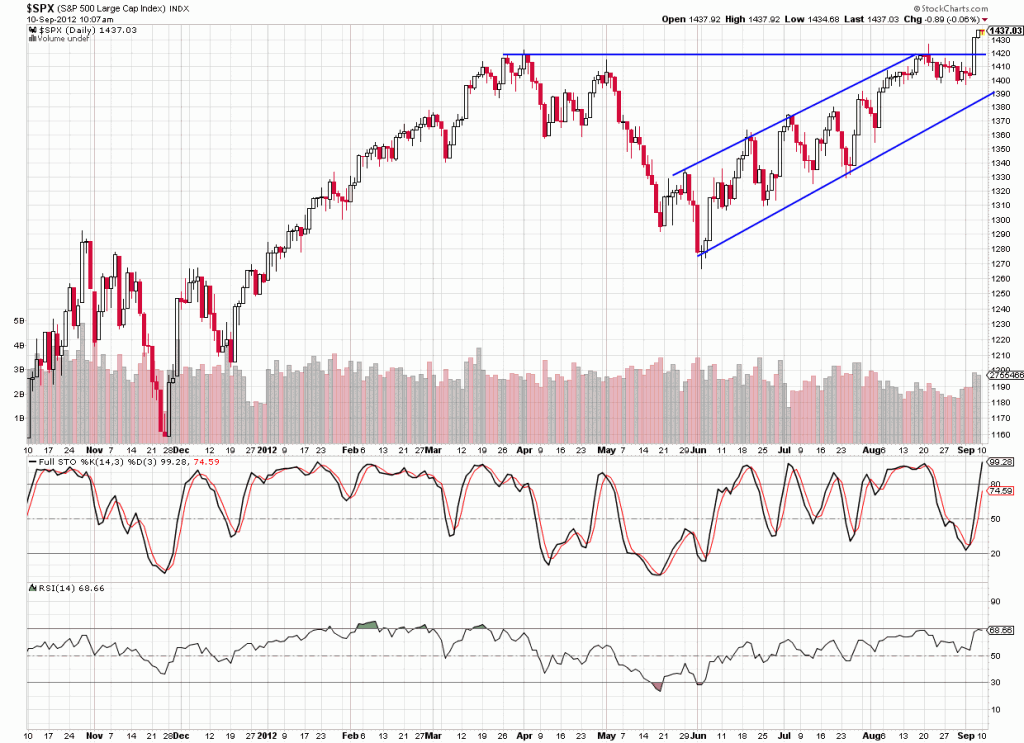 The S&P broke the resistance point of just over 1420 last week. It’s looking like it passes my “3-day” rule for breakouts – that is, a security that breaks though an old level of resistance or support should be given 3 days to hold to reduce the potential for a false breakout. Thus, we might just see 1500 yet. However, I still believe that the market direction is largely going to be carried by the Fed action this month (there is a meeting this Thursday where something may or may not be said…). An extension of low interest rates is pretty much in the cards, and I don’t think anyone will be too inspired if Bernanke suggests such an extension. However, a bond-buyback or similar “QE” program could push the market up to that final 1500 resistance level I’ve mentioned in numerous posts. Conversely, if no real direction is provided by the Fed, there may be a selloff. The 1420 level may not hold in such a case.

Truthfully, this is one of those times when it’s pretty hard to give firm guidance for near-term market direction. Seasonality is often bearish at this time of the year, and markets may be getting a bit overbought (note RSI and stochastics on chart above). Trailing PE ratio for the S&P (I only look at trailing data—forward earnings are a guess) are slightly above historic averages (16.5 current vs. 15.5 long term mean average).  But the Fed can cause the markets to disregard reality.

I continue to hold over 30% cash in my equity model. I am not bearish enough to hedge (via inverse, shorting or VIX strategies) but not bullish enough to be fully invested either. As mentioned in last Monday’s report, it’s a bit of a mugs game right now. Better to play a cautious hand in light of the conflicting evidence for markets, in my opinion.

I own an older model Porsche. I like it because its a purist car - a true drivers car for those who want absolute connection to their vehicle. Manual tranny (essential for the purist driver) with a END_OF_DOCUMENT_TOKEN_TO_BE_REPLACED

As a contrarian, I rely at least to some extent on sentiment data. As the Templeton once said: “To buy when others are despondently selling and to sell when others are avidly buying requires the END_OF_DOCUMENT_TOKEN_TO_BE_REPLACED

We're into the home stretch, baby! Today's questions are being bundled together, given that they both focused on commodities. Before going to the charts, let me again thank all question-posters for END_OF_DOCUMENT_TOKEN_TO_BE_REPLACED