Thar’s gold in them thar’ hills!

An interesting Financial Times article was quoted by BNN recently:

“This is not a good market for bears, in general. We are now in the seventh year of a bull run, regularly threatening new highs on the S&P 500. But even now, equity research teams are urging clients to load up. According to an index calculated by Bloomberg, which ranks analysts’ calls on a scale of 1 (strong sell) to 5 (strong buy), the median recommendation on S&P stocks is now a record 3.85. That number has moved steadily higher since the crisis, surpassing anything seen during the dotcom bubble of 1999/2000 (3.73) or the pre-Lehman peaks of 2007/08 (3.74).”

This quote adds credence to remaining invested, yet retaining a comfortable level of cash, should the markets decide to correct (an ever growing potential) between now and October. As noted on last week’s blog, the S&P500 has been stuck in a sideways market for the past 2 months. Perhaps we should be looking towards other investment categories for trading (not investment) opportunities over the coming months while the S&P finds its feet.

One of those opportunities may be in gold. For anyone who follows my work, I have been very, very bearish on gold for several years now. I called to top correctly in 2011 (visit my old blogs if you wish to verify this). But I’ve also viewed gold, within that bearish bigger picture, as a good shorter termed trading vehicle. We at ValueTrend have traded it and – recently – oil – through shorter termed patterns. I think there’s a chance that a short termed trading opportunity will appear in gold as it enters its seasonal buy period in July. Here is my reasoning behind this thought:

Gold has been in a bear market since its spring 2011 top. Since 2013 it has been range bound, with a lid at $1350 and a floor about $200/oz below that just over $1150. The trading range is getting tighter. Such a tight range is unlikely to remain in place. A breakout to the upside through the very recent resistance of 1220, and a target to test the old $1350 zone top may occur. Or a breakdown below $1150 may be coming. The near termed charts may provide clues to which way it could break.

Momentum oscillators RSI and Stochastics are heading down towards oversold positions. It’s inevitable they will find a bottom and hook up at some point –even if it’s just to signal a minor price bounce. The trick will be that price doesn’t break $1150 support by more than a few days. This is key to watch if you want to buy gold for an upside trade. Cumulative moneyflow (bottom pane) is trending slightly down to sideways. At least money has stopped or slowed in leaving the room – for now. Renewed confidence in a meaningful move will be backed by a break of my trendline on the chart.

Seasonal buy signals come in around the end of July. My take on a potential gold trade is to watch for the momentum indicators to bottom and hook, while noting an increase in moneyflow. Ideally, an upside break of my trendline on the Accumulation/Distribution line would occur. At ValueTrend, we don’t hold any gold right now, nor have we for a while. But we would consider a short termed trade should the above conditions be met. You might want to watch the charts for these factors as well. 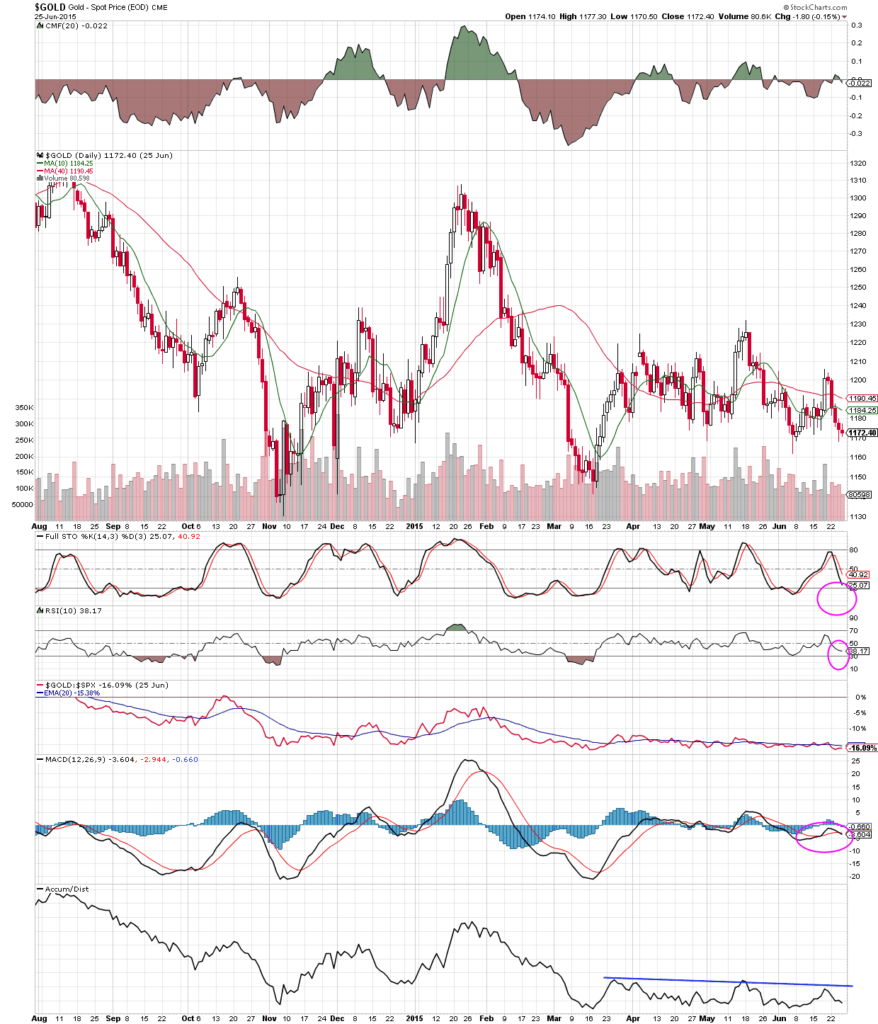