I have noted my long position in BCE—purchased at around $56 after the breakout through that multi-month ceiling in October. In fact, it was a Top Pick on my recent BNN appearances. Recently, the telecom space took a hit – most notably on shares of Telus- but also affecting Rogers and BCE. I’ve received a few requests to follow up on this pick, and on the telecom space – so I thought I would address the sector in today’s blog.

BCE broke out through its ceiling of $54.50-ish back in October. We bought the stock at a few pennies over $56 in the second week of that month, noting the confirmed breakout and positive volume. The stock proceeded to climb, but along came the early winter broad market volatility- sending BCE down below its breakout point. Yikes! However – using my 3-day rule, the stocks break of $54.50 lasted less than 3 days and appears to be firming up above that break point again. The stock has not approached the bottom of its old trading range—which lies around $51.50. Further, we don’t tend to sell stocks in knee jerk broad market movements that we view as temporary—case in point, the recent selloff on the markets is likely to be contained within the sideways range it’s been stuck in for the past year. You don’t want to get caught panic selling in a short termed over reaction that has a high probability of recovery. Assuming that the stock you hold does not have unique problems.

Comparative relative strength- middle pane – is excellent. Moneyflow, bottom pane, is getting choppy – longer termed trend (weekly chart not shown) is positive. The stock sits just above its key 200 day MA and is showing early signs of recovery via its momentum indicators. MACD has not hooked up yet, but RSI and Stochastics have shown positive hooks. 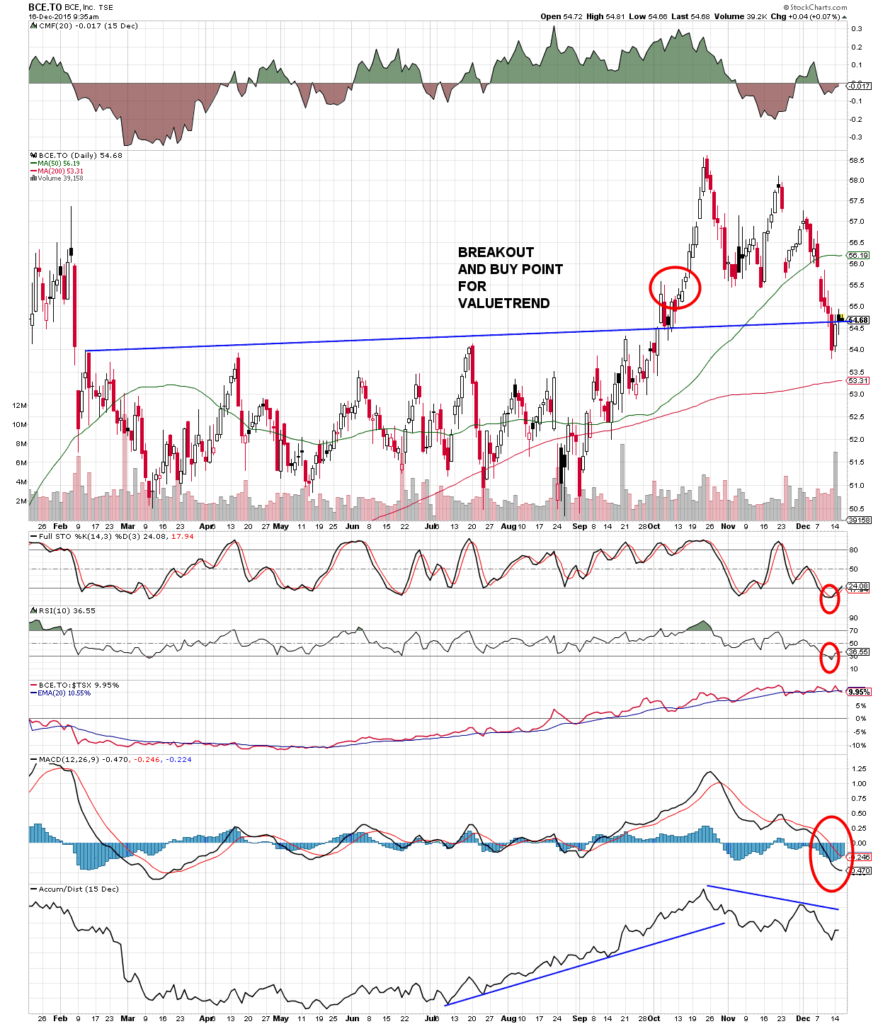 Telus broke the bottom of its major trading range (just under $40) recently. Its below its major MA’s. Comparative strength vs. the TSX (middle pane) is flat. MACD is not hooking, but Stochastics and RSI are hooking up. Moneyflow is bearish on both daily and weekly charts (weekly not shown) 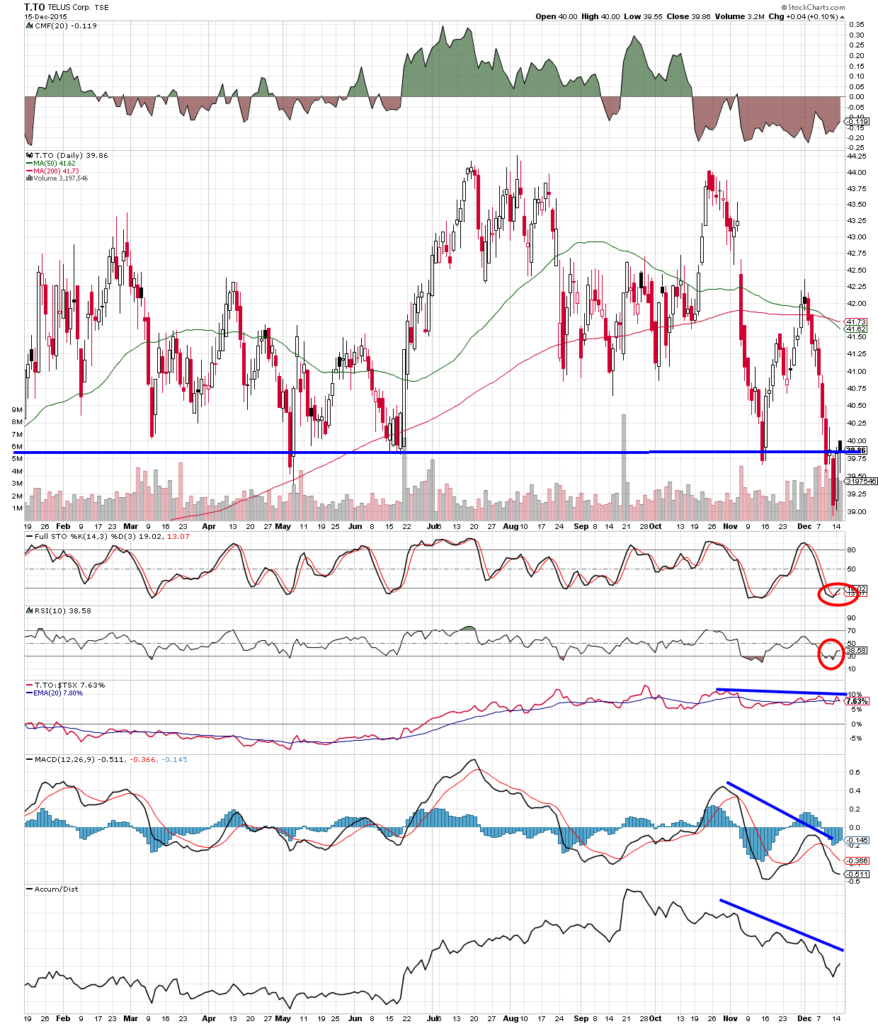 Rogers seems to have the best looking daily chart of the group. Rogers is well above its $46  breakout point. The stock sits well above its key MA’s, it has positive relative strength vs. the TSX, and even MACD is trying (although has not yet) to hook up. Other momentum oscillators are hooking. Moneyflow is the best of the group—its trending positively on both short and weekly charts. 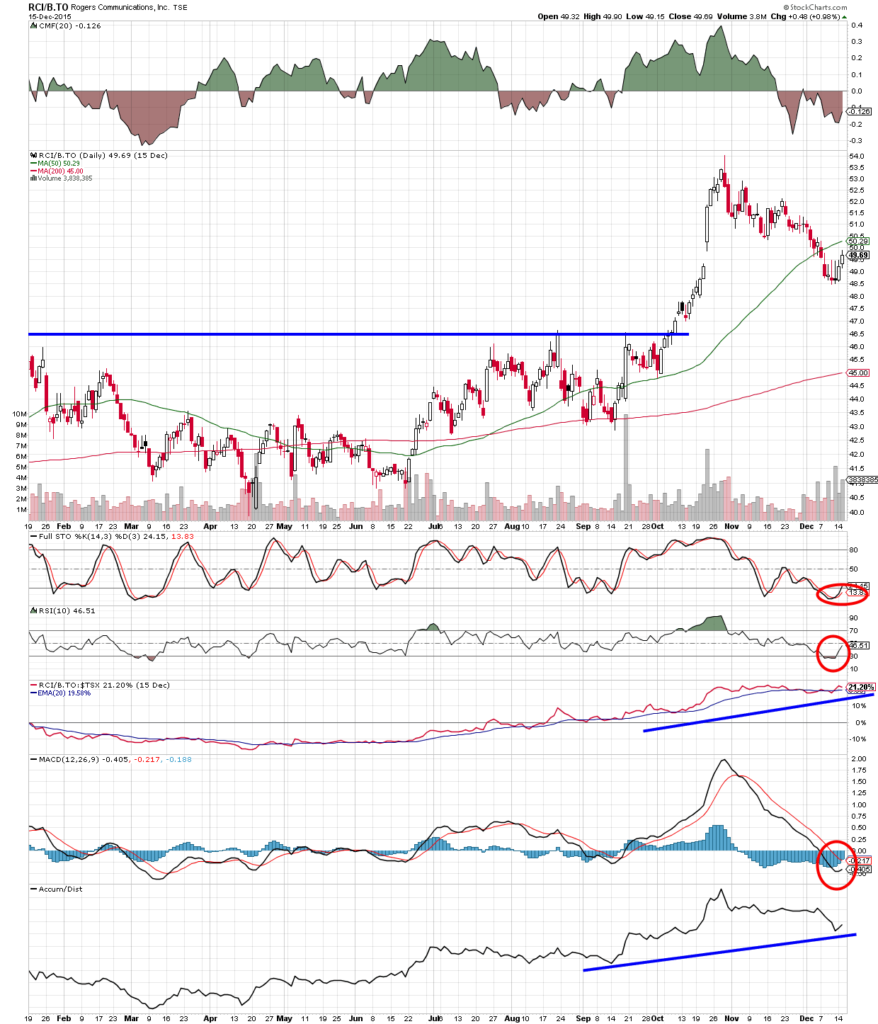 Rogers and BCE are the better charts in the sector. The recent pullback was likely in reaction to a broader market movement, not a stock specific event. I continue to hold BCE – and would suggest investors long this stock or Rogers do the same at this time. Telus may turn around in the near term, but there is a wide level of overhead resistance that will likely contain the stock from too much upside.


Keith on BNN this Friday

I will be on BNN’s call-in show MarketCall Tonight Friday December 18, 2015 at from 6:00pm to 7:00pm. Tune in to BNN to catch me live on BNN’s premier call-in show, where viewers like yourself can ask my technical opinion on the stocks you hold.