Thanks to reader Bruce for asking me to address  tax loss selling strategies (both selling and buying) this year. I continue to encourage readers to offer blog topic suggestions on topics that might appeal to a broad audience. This question certainly does- especially given the rather volatile year we’ve seen on the markets.

To start the blog off, I’d like to remind readers that the sideways volatility we have experienced since early 2018 was wholly and entirely expected.  I had addressed the probability of such an occurrence via many, many, many blogs last year. In fact, I recently reiterated that it is almost a certainty that you will see a period of sideways contraction after a low volatility year like 2017—here is the blog.

After viewing the chart on the above noted blog,  it should be clear as to why we are experiencing this year’s moves — AND—it should convince you that it’s a normal, healthy part of a bull market cycle. Like many of you – I read doomsayers articles, and some of them present convincing technical evidence as to why we may be entering a bear market. I do not heed their “advice”—despite their seemingly convincing evidence (bond yields, Elliott Wave count…yada, yada..).  I pay attention to long termed price patterns – and everything I see lines up as pretty normal. Repeat: after low volatility uptrends like 2017, you get consolidations. Please read the blog I refer to above – read it again and study the chart. Our myopic nature sometimes stops us from seeing the forest for the trees.

We don’t want to paint all tech stocks with the same brush. For example, our ValueTrend Equity Platform continues to hold stocks like MSFT and GIB.A due to their continued bullish charts. But many stocks in the sector are hurting. Semiconductors have largely been hammered, as have some of the high profile tech’s like Facebook, who’s chart looks beyond repair. I’d be very selective in this group. The XLK chart shows us that it’s in danger of breaking its long termed trend, although its primary trough has not been cracked at this time. This should prod us to examine the individual names we hold in the sector.

The emerging markets might be currently called the “submerging markets”. If you cannot see on this chart why you should avoid this trade, and sell it if you currently hold it… please go find another hobby.

I wasn’t sure if I should put the small capped stocks into the “buy” or “sell” category on today’s blog. The IWM chart looks similar to that of the technology chart shown above. Its breaking down, but hasn’t yet taken out its primary trough on the weekly chart. Hmmmm…

The small caps should enter into their period of seasonal strength around now, and that strength can often carry forth into March or later. But we need to watch for a break of $145 on this ETF. If that happens, all bets are off, and it’s an outright sell candidate. However, if it holds $145 and bounces higher – it might be an opportunity for an oversold bounce into the spring –as would XLK. Too hard to tell at this point, so I am inclined to wait. It’s going to be a tax-loss seller if it doesn’t start moving soon. Sometimes ya just gotta wait and see what happens. This is one of those times. 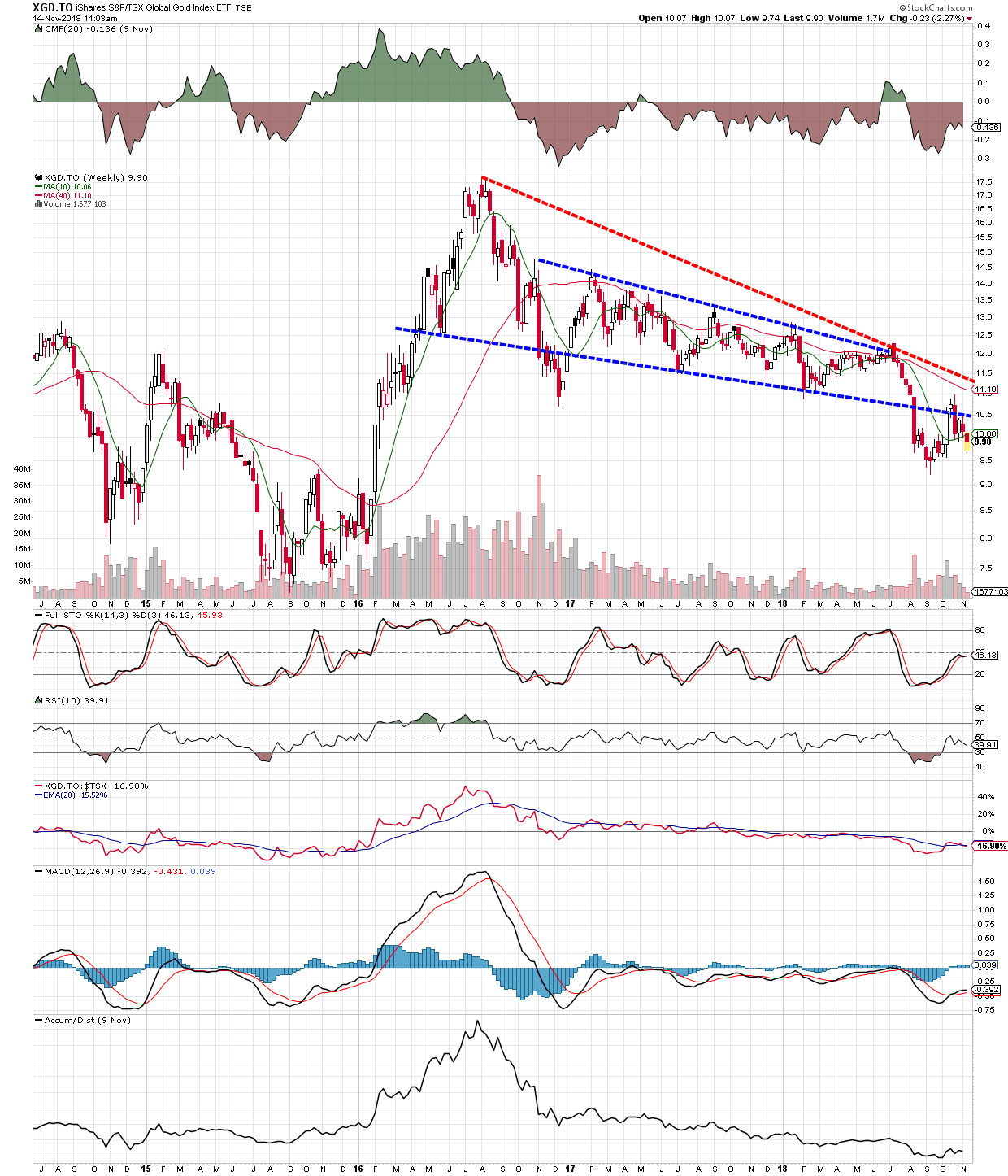 While I am aware that gold producers are oversold and may experience a small bounce in the coming weeks, its primary trend is down- as seen via the XGD chart, reprinted from the Nov. 8th blog. To quote my blog from November 8th regarding gold: “This sector has been under pressure for several years. Even during the period from 2017 to current, the trend had been a gentle but undeniable downslope. In other words, gold has been , and remains, the dogs breakfast” I don’t think that seasonal trends (which can be OK from December into the new year) will be enough to bring gold back enough to merit a trade. It’s a tax loss sell candidate.

The seasonal buy period for Canadian banks is from October until the end of the year. The ZEB chart shows us that $27.75-ish support was successfully tested recently. The sector looks to be a play into the $30 area – possibly into the new year.

As the Canadian banks exit their best seasonal period, the US banks enter theirs. US banks typically perform well from December until the spring. The ZUB chart shows us strong support at $26.50 was momentarily punched in October – but revival happened as the correction righted itself. Resistance comes in at $29, then into the low $30’s. It looks healthy enough to consider as a buy candidate at this point. 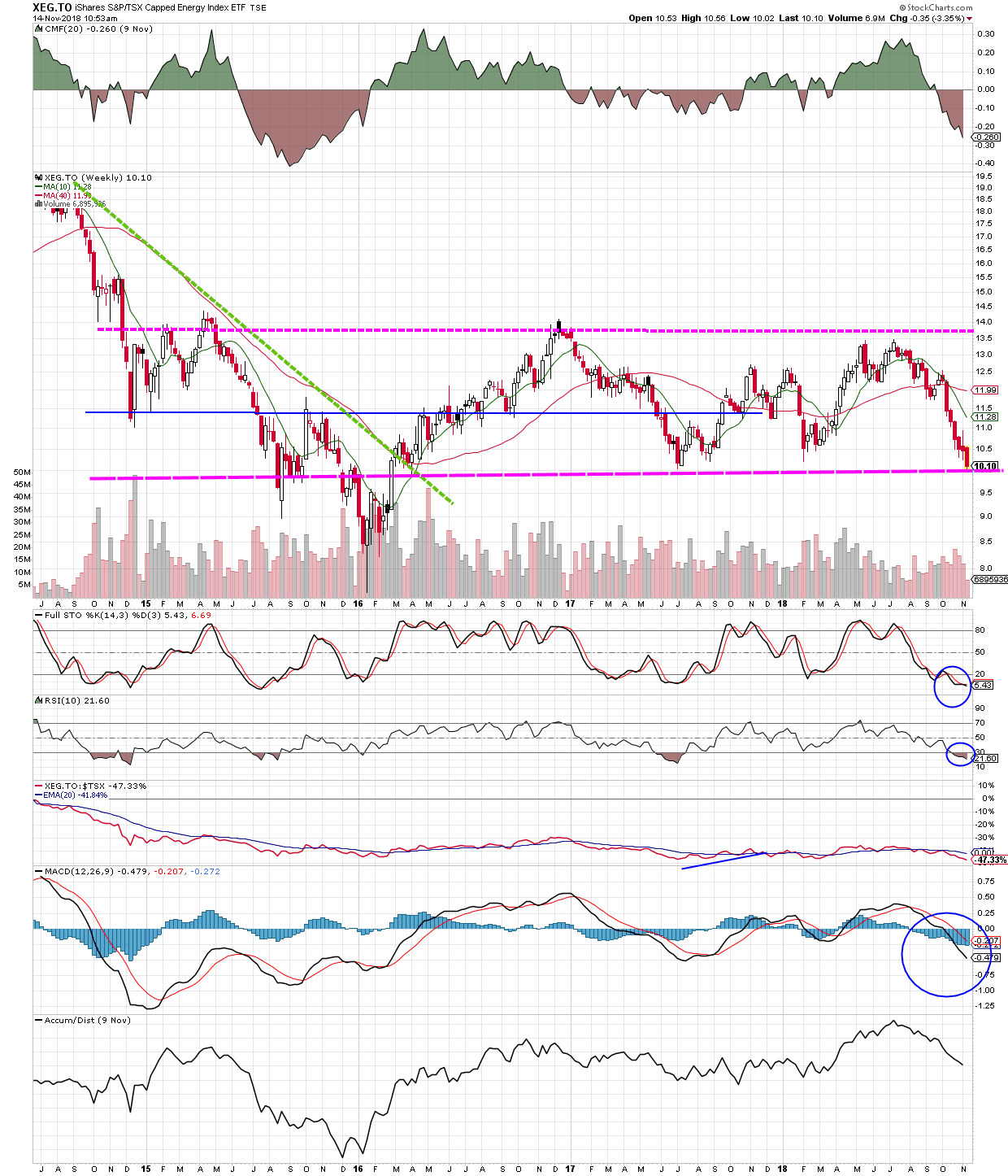 I covered the energy sector, along with materials and gold on this blog recently. Energy is the only sector I have any interest in from a technical perspective of the group. Typically, the sector can do well from January into the spring from a seasonal perspective. As noted on the blog, support on the XEG ETF lies at around $10, resistance $13 – per the box it’s been trapped in since 2015. We want to see it supported before buying. Better to buy on a bounce at closer to $10.50-$11. Target would be $13 or thereabouts. If it can hold $10, it looks to be a good buy candidate.

Here’s a link to Brooke Thackray’s report, where he suggests that we may see some rotation into value stocks this winter.

You’ll note that he and I differ on our outlook for gold and small caps. But then again, my trading horizon is usually a bit longer than Brookes. He’s often able to take a quicker move than I can via his role as analyst for the HAC ETF. So perhaps these sectors might give him a bounce that he can play – whereas I am not as agile, given my longer horizon.