Home / A tale of two cities

A tale of two cities

Utilities on the US market are trading with substantially different patterns than their Canadian counterparts. Let’s take a look at the stocks and see how to treat utilities on either side of the border, from a technical traders point of view.

We can follow the SPDR Select Utilities ETF for pretty clear view of the pattern for utility stocks in the USA. It’s probably the most widely traded utilities ETF on the south side of the border, so it’s volume profile is representative of the sector itself. As you will note on the weekly chart of XLU above, the market is in a longer termed uptrend for the sector. 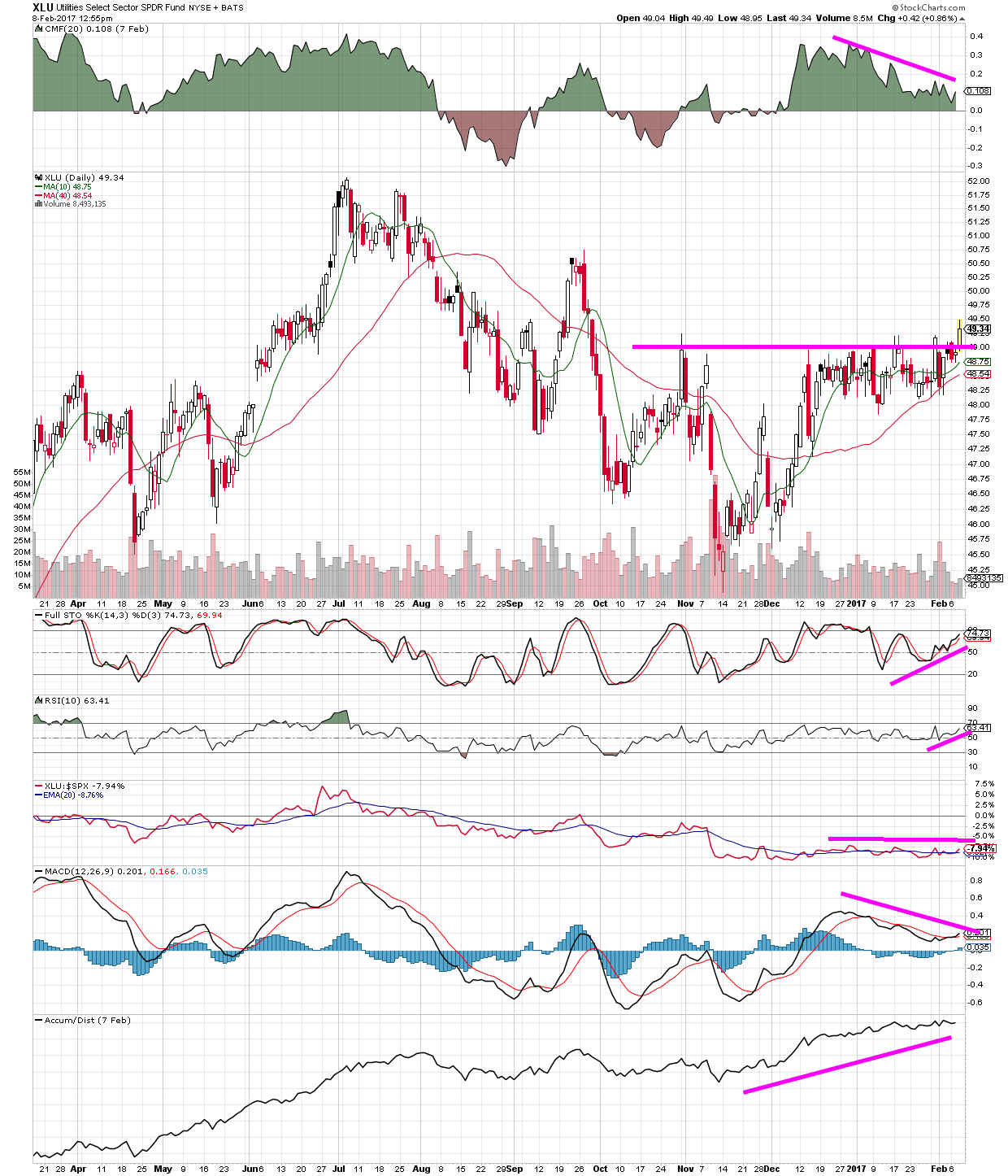 Further analysis of XLU on the daily chart above shows us what could be a minor breakout of a consolidation pattern.  That would need to be confirmed by further price action that stays above $49. Neartermed momentum (stochastics, RSI) is trending up and not yet overbought, while the longer termed momentum indicator MACD is diverging bearishly. General moneyflow (AD line at bottom) is bullish, but moneyflow momentum (top pane) is waning a bit. Relative strength vs the S&P500 is flat. Overall, not a bad looking chart. Utilities are not in their favorable performance season, thus the sector may stay in-line with market performance until the spring – which is when the official outperformance period often begins.

As you will note on the weekly chart for the BMO Utilities ETF above – which tends to be one of the widely followed Canadian Utility ETF’s – the ETF had been range bound for a very long period of time. Only last year did it break its almost impenetrable lid of $16.60. After forming another small level of consolidation at just under $17.30, it looks like the sector is breaking out again. 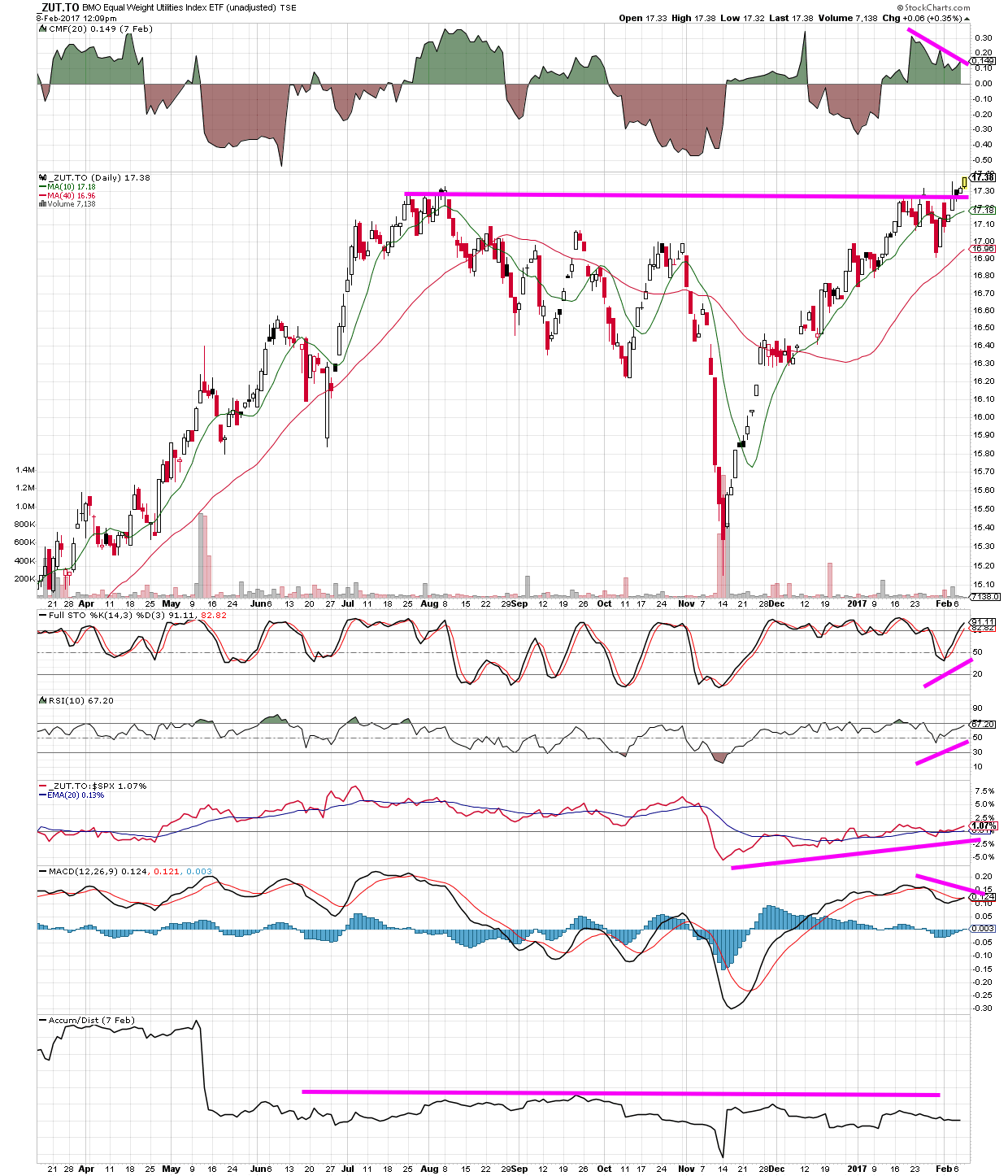 On the daily chart, note how moneyflow (AD line at bottom) is dead-flat for ZUT. Like US utilities, the sector has rising momentum that is not yet overbought, but a negative divergence by the longer termed MACD momentum indicator. Unlike US utilities – comparative strength to the S&P500 is favorable. Not shown on this chart is comparable strength to the TSX- so you will have to take my word for it that the sector is also doing better than the broad TSX.

Because the trend has been in place on the US utilities sector ETF (XLU) for several years, it’s safe to buy the sector and hold it, while ignoring the “speedbumps” along the way. Keep the stock so long as the trendline holds  if you are a long termed investor who likes the 3.3% current yield on XLU. On the other hand, the Canadian utilities market is not necessarily trending. Yes, the breakout by ZUT is favorable, but the ETF’s history suggests that it can consolidate for long periods. Should ZUT fail to hold its current breakout price of just under $17.30, it could easily fall back towards old resistance (new support) of $16.60. So, the breakout is bullish and warrants consideration for new investors, but it’s not quite as predictable in price behavior as XLU.

Click here to view my Globe and Mail article and BNN market commentary, along with my Top Picks from Monday’s MarketCall Tonight show. 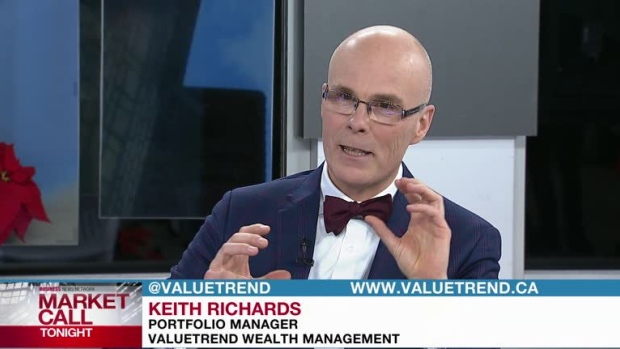