Home / Struggling phone makers and telecoms: a bargain in the making?

Struggling phone makers and telecoms: a bargain in the making?

Currently, AAPL is forming an impressive base-perhaps in the form of a head and shoulders bottom. If you’ve read my book Sideways, you will know that base breakouts are amongst the most powerful signals you can get when looking for significant upside. The trick is not to guess when and where the breakout will occur. Wait for the breakout, and enter when it’s a proven entity – a breakout might look good at around $450. AAPL is not a buy yet.

Interestingly, the communications group (phone makers) began to suffer about a year after the fall of the mighty APPL. Not only have competitors such as BB (formerly RIM) and Samsung (SSNLF) fallen out of favour recently, the telecom stocks have also fallen like rocks (BCE, Rogers, Telus, etc as predicted here in June: https://www.valuetrend.ca/?p=2216 ). While not immune, the US telecoms such as AT&T (T-US) and Verizon (VZ-US) have held out better than the Canadian counterparts. 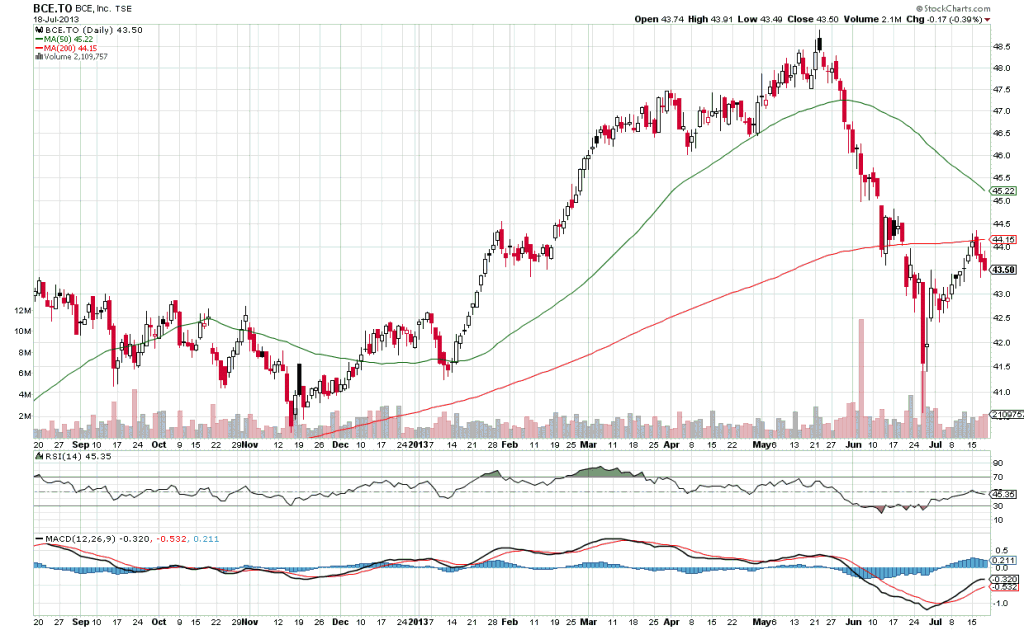 At this juncture, there may be some value appearing in the Canadian telecom and phone maker space. But I’d wait for confirmation of a bottom breakout before boldly buying at this time. For example—BCE is finding resistance at its 200 day MA, which lies around $44 (red line). It needs to break through that level to become a buy, despite the positive profiles of MACD and RSI. Watch these stocks. Some of them may end up becoming the stocks you wish you had bought in a year.

Please note that I am posting about once a week until the end of the summer. My recommendation is to follow me on twitter to be updated on new blogs during this time. I’d expect to return to my more usual routine of twice weekly blogging when the kids get back to school.