Home / Stocks I love to hate.

Stocks I love to hate.

The majority of my blog posts in the past year have focused on what sectors and stocks to consider for one’s portfolio. Today, I’d like to turn that thought around, and discuss sectors and/or stocks that should be AVOIDED or SOLD if you own them.

Warning: Many of my investment themes are based on contrarian thinking. As such, many of the positions I am buying or avoiding can stimulate a fear-reaction based on our brain’s herd-following instincts. But don’t worry. That’s just your brain’s limbic system telling you to stay with the crowd  Try to ignore that guy – he’s one of those primate thinking types.

Bitcoin is a highly volatile security. It has proven as a non-correlated asset to the USD, the stock market and bonds. As such, its an interesting hedging vehicle, and a good trading vehicle. But its volatile. Thus, its best kept to a minimum in any conservative investors portfolio. Many view Bitcoin as an “under the radar” form of currency that can help preserve wealth as governments pile on debt. It would appear that this “under the radar” status is changing as regulators review the currency aspect of this vehicle. It appears that cryptocurrencies will soon be heavily regulated taxed. In fact, tax laws already treat bitcoin like an investment, rather than a currency, and try to apply capital gains tax. The appeal in Bitcoin was it could one day be a usable currency around the world. But now it doesn’t appear that this is the path for Bitcoin. Its simply a non-correlated asset to a portfolio, and a volatile one at that.

So, looking at it as an investment – you will note that the chart displays a parabolic pattern. Its so overbought, its almost indescribable. The 40 week (200 day) SMA lies around 22,000 while the index sits at 56,000. That’s well over 200% above the moving average. Recall my warning of 10% over that moving average as becoming overbought. Supporting that observation are the sky-high momentum indicators that have maintained overbought status through the parabolic move since late 2020.

Bitcoin is beyond overbought. Its outright speculative. Its a sell in my books. 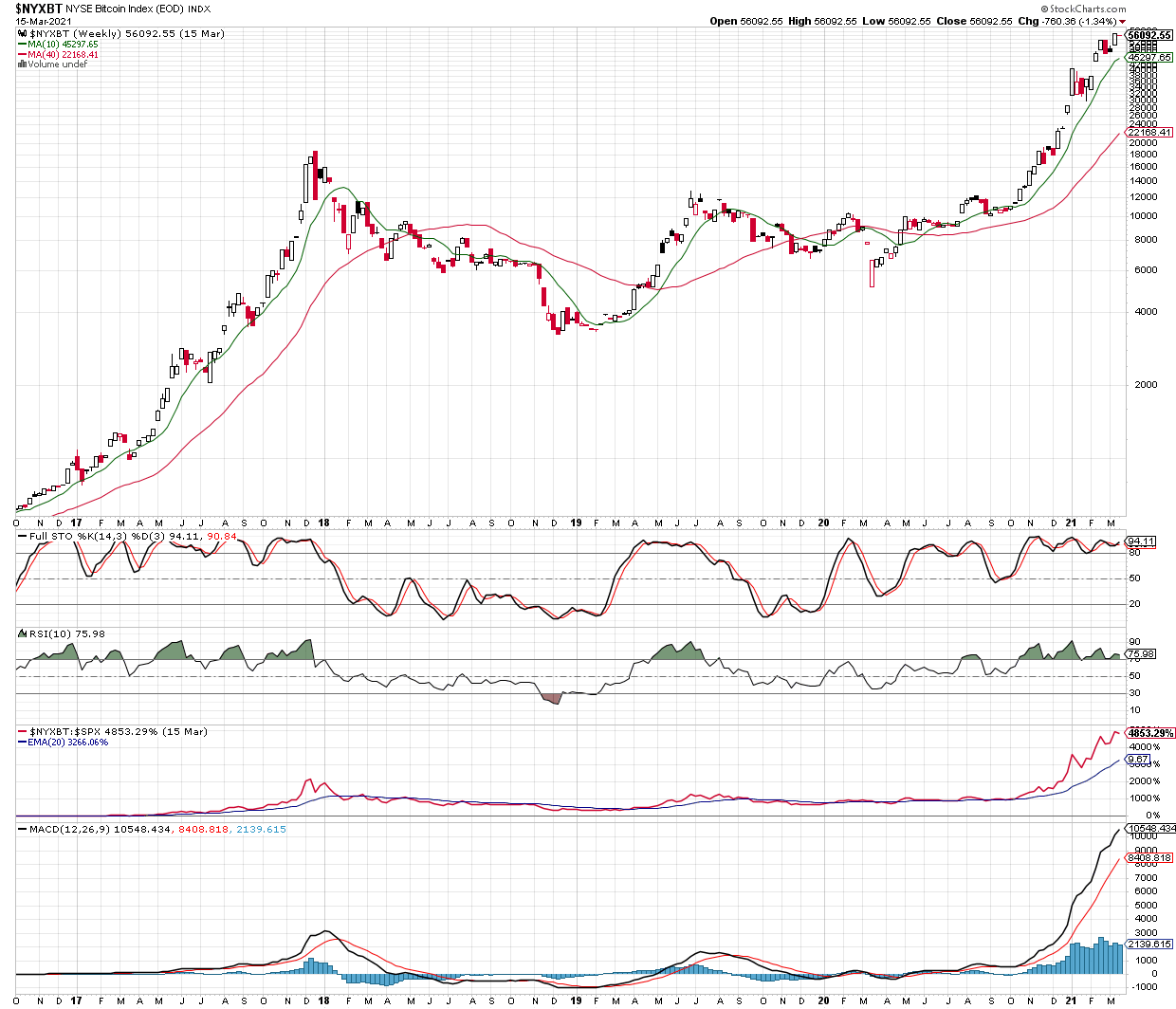 Big news: The economy will re-open. Canada will no doubt lag in its reopening due to the pathetic performance of the Government in its vaccine rollout and its controversial business closure strategies. While Canada is at an unforgivable rank of  20th in the world, the rest of the world is well on the way, or at, the 70% herd immunity point. For this reason, its a mater of time before travel, industrial production and services are in full re-opening status for most if not all of the developed world. Even Canada, despite its inept captain & crew. And that means pressure on the stay-at-home stocks.

Now, don’t get me wrong. COVID has forced some adaptions that forever changed the way we do business. Home delivery shopping and eating, webcast conferencing, office space declines (at home working), home gyms and other stay-at-home adaptions have become more mainstay. These business shifts will be with us going forward. More people will shop online going forward than they were planning to in 2019. Still, I will argue that large ticket items like furniture and washing machines will draw go-outside business. As will “pleasure shopping” (eg- impulse shopping at outlet malls, etc.).

My argument is that the stay-at-home mandates that forced entire populations to rely on these business models will no longer force absolute cross-population reliance on them as the economy re-opens. For example: Zoom has become a wonderful tool for my office to connect with clients and do webinars (have you seen our “Ask me Anything” webinar? Click here to view it). I do MoneyShow Zoom/ equivalent webinars and happily participate in College, University and Investment Club meetings as a guest lecturer. But I can assure you that, once the economy fully re-opens, I will be doing live events again for these same groups. And I expect to be back on BNN/Bloomberg doing my Technical Analysis MarketCall shows. In other words, tools like Zoom will have their PLACE, but will no longer REPLACE the in-person experience.

I’d argue that the leaders in many of the at-home technologies such as Zoom, Uber, Peloton have big-bucks competition in front of them. For example, Uber is competing with Lyft on both the transportation and food delivery sides. Door Dash is taking a run at the model as well. Meanwhile, all of these companies will face pressure from people wanting to back outside and have a beer at their favorite pub (assuming the pub hasn’t closed down!).

UBER is trading about 30% ahead of its 200 day (40 week) SMA and shows signs of momentum rolling over. Of particular concern is the MACD indicator, which can signal a larger move to the downside if the indicator definitively arch’s down. 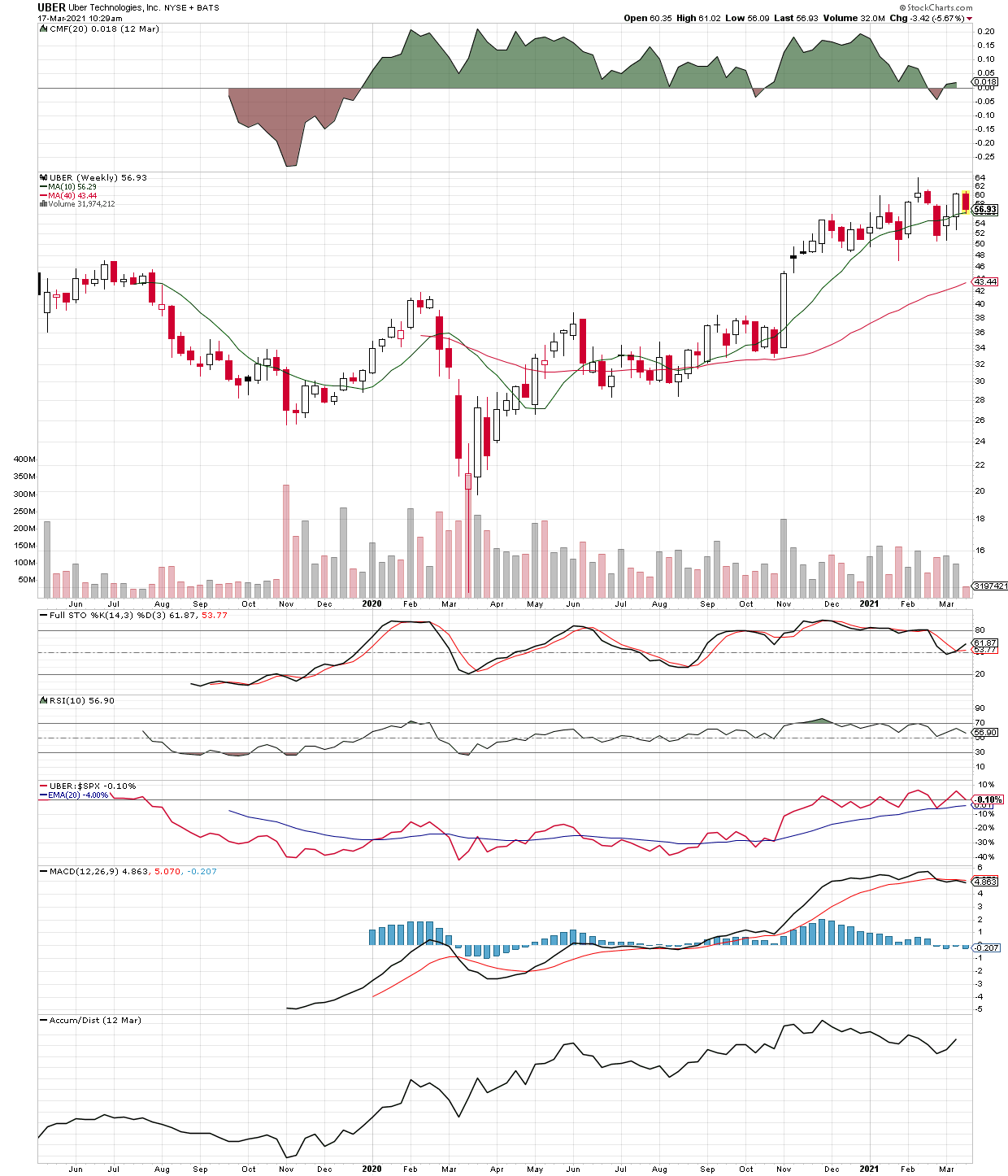 Zoom faces tremendous completion from Google and Microsoft. These are well established giants with the dollars to expand their platforms and give serious competition to any competitor. Meanwhile, similar pressures of declining usage will evolve for the webinar conference tools as live meetings become an option again. Zoom, and Peloton noted above, have sold off since my original rants on this subject last fall.

The prevailing mentality that Electric Vehicles will replace conventional vehicles shortly, that solar and wind will replace conventional power resources, and that fossil fuel usage will drastically decline or be eliminated have driven certain sectors and commodities higher, and others drastically lower. All of that movement has been based on an irrationally enthusiastic assumption by investors that these changes will occur much, much faster than is feasible. These movements – up for some sectors and down for others – have created massively overbought and oversold situations. Search my blogs of late on the oversold opportunities in oil, coal, and other oversold sectors. Today, we are going to talk about the overbought sell candidates.

I’ve blogged on the solar industry and electric vehicle industry before. In fact, I wrote this blog and pretty accurately called the recent correction on the solar ETF (TAN-US) and Tesla (TSLA-US). Nothing’s changed since then, beyond these securities rolling over.  So this comment is just an update on these sectors, and a reminder that, despite the pullbacks, these sectors are not out of the woods yet. Fundamental reasons behind my bearish call can be read on the blog (link above).

To revisit the charts, let look at TAN first. Perhaps the ETF is starting to base. When I wrote about it in January, it was 115% over its 200 day SMA and about 30% higher in price. Now its about 20% above the moving average- and (you guessed it) 30% lower in price. Yes, I’ll continue to pat my back on that one. Is it a buy now? NO! Its still 20% over its moving average, and its early yet to say that it has anything but consolidation ahead of its price before a substantial upside move begins. Remember my bearish call on Amazon back in the summer? Since August, the stock is flat with a 10% variation in price (I will pat myself on the back for that one too, thankyou, thankyou) . I believe TAN will start a similar consolidation shortly. Here’s the chart :

Tesla is in the same boat. When I wrote about it in January, the stock was about 140% ahead of its 200 day SMA. And its price was about $900. Now the price is $670, and the price is 30% ahead of the moving average. Wait for it…(crowd cheering…), thankyou, thankyou. Nailed the timing on that one too.

Here’s the problem: the stock still trades at 30% above its 200 day (40 week) SMA. Its probably consolidating like TAN, above. And it may move sideways for a prolonged period to wash its excess out. But its forward PE has come down to a mere 160 x earnings. Back in January I noted on the blog that it was 378 x forward earnings. So its a bargain now, right? Um, ok. And if you think that’s a bargain, I have an excellent vintage bottle of Baby Duck white from the 1980s’ that I’ll happily sell you for 160 x what I paid for it ($5). This was the classic college-student budget wine that had complex undertones of kool-aid and ginger ale – the perfect bottle for a date night for the financially challenged teenager. I was trying to sell it at 378 x my original cost, at $1890. But prices are coming down on this vintage. Its a rare find for the wine collector and connoisseur, and now at $800 for the bottle, its probably a real bargain!! One time offer, step right up TSLA stock buyers–add to your overpriced item collection with a fine vintage wine!

Remember the old expression “If you believe that, I’ve got some swamp land in Florida I can sell you?” Ironically, with a quick name change, Florida managed to create desirability to buy a bit of that swamp land.  Its’ now environmentally protected marsh land and wildlife preserve, you see. Who wouldn’t want that???

I view many of the concept stocks and sectors such as EV’s, Solar/ alternate energy, marijuana, and stay-inside technology as viable business models that will develop over time. But, like Florida “marsh” land, I wonder if investors are overpaying for something that is, still, just another longer termed evolution in business, rather than an immediate get-in-now opportunity.

For those who still favor the above stocks at this moment, my offer for the vintage 1980 Baby Duck bottle remains open to interested “investors”.

You can sign up to receive the blog in your inbox automatically by clicking the “Never miss a post” button, or here. 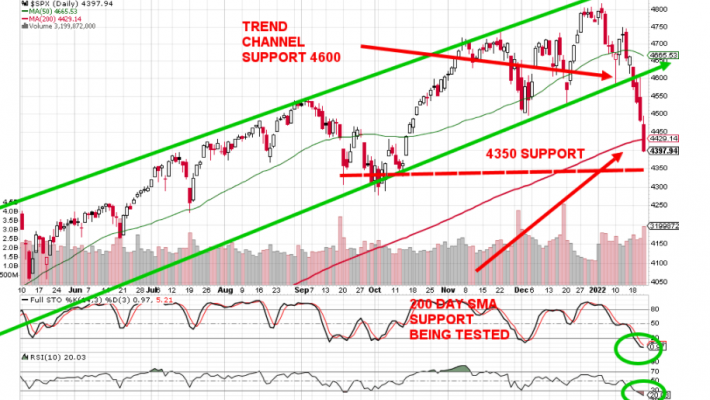 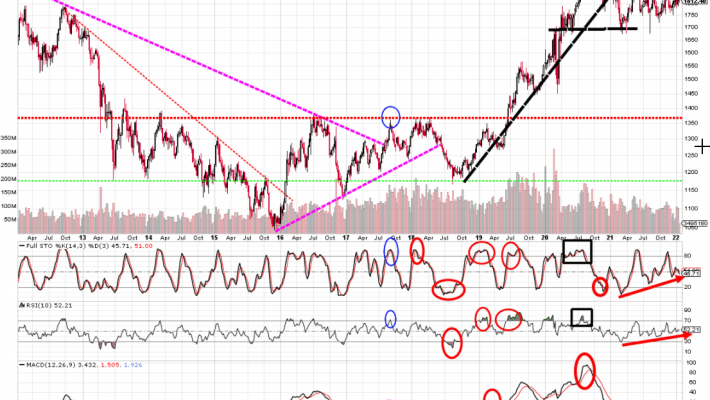 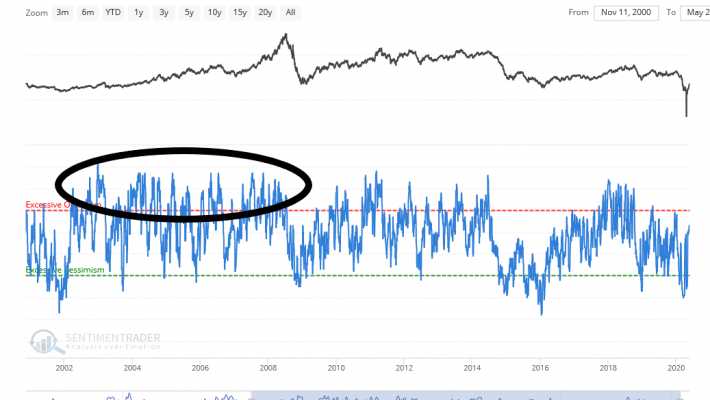 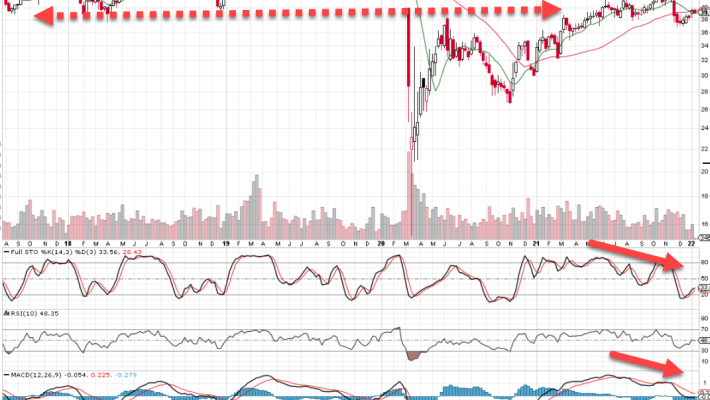 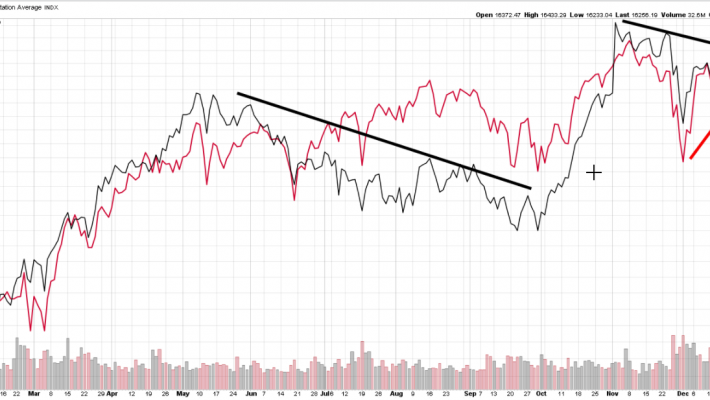