Let’s get right to the chase. Today’s big question seems to be…Are the US trade wars going to be the straw that finally breaks the bull market’s back?

That’s a big, big question, and of course—I don’t know the definitive answer to that. However, I CAN look at a few charts and reference some of the research I’ve done on past blogs to provide some level of insight on this question.

First…I want to bring you back to some big picture work that I have done on past blogs. You need to read these blogs to get a perspective on where we are in the investment cycle. I am no guru, but I do feel pretty confident that my bigger picture work is likely going to prove accurate.. Some of you know from reading this blog that my perspective is that we are due a 20%+ bear market correction – quite likely this year. These two blogs provide some insight:

How long can this keep going on?
Armchair Elliott Wave: The macro position of the market

So let’s say that you will at least entertain the idea of a bear market correction happening soon (sometime in the next year – or less). The next thing we need to look at is whether NOW is that time. I’ll use daily charts for a neartermed view on the markets, and I’ll avoid the use of momentum indicators to keep things tidy and focused on trend.

The S&P 500 is widely followed as a broad market indicator. While not perfect, it represents the trend of the overall market and US large caps fairly well. The recent uptrend on the daily chart since the February correction has been broken. Current support is coming in at around 2650. That level failed today, but it is only day 1 of a break. If it stays below 2650 we will likely test February’s main support low of  about 2580. The S&P is still above its vital 200 day SMA (red line). The picture is neutral to bullish for the index. A break of the Feb lows could put the S&P 500 below its 200 day SMA. This would be a major concern if such a break lasted more than a few days. We’re not there yet, but keep an eye on this potential.

NASDAQ- leadership in a “risk on” index

The NASDAQ contains a greater proportionate weighting in the market leaders (FANG’s) than the S&P 500 does. Market leadership by the FANG’s will keep this bull market intact. A rotation out of that leadership will likely be the beginning of a bear market correction. Yes, you may see some rotation into defensive sectors, but the influence of the market leaders will put enough pressure on the broader sectors to cause an avalanche. Currently, the NAZ is above its last low of 7100. Rising highs and lows indicate the index is on target to recover from the Feb lows. The technical picture of this index is, so far, better than the S&P 500. It’s well above the 200 day SMA. No signs of breakdown at this point.  But that will change if 7100 is taken out by more than 3 days (its floating around 7100 as I write). Keep an eye out!

The short termed trend for the RUT is intact. Higher highs and lows suggest it is on track to recovery from Feb’s selloff. The old high hasn’t been taken out yet, thus forming a bit of a triangle. Its above its 200 day SMA. Obvioulsy, the market still favors “risk on” – given the superior charts of the NAZ and the RUT. So far, anyway! 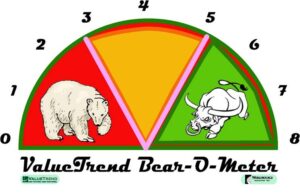 The Bear-o-meter read “6” on March 7th. I blogged on that reading here.

It remains at “6” – which is a bullish reading insofar as risk/reward trade-offs. Recall that risk and reward are always present. A high Bear-o-meter merely tells us that ratio is skewed favorably towards reward – although risk remains present. The higher the reading, the higher the potential reward in light of the ever present risk. And vice versa.

Interestingly, despite the similar readings from 2 weeks ago, there have been a few shifts within the positive/ negative readings of the indicators that comprise the Bear-o-meter. For example, the Smart/Dumb money confidence spread (sentimentrader.com) has declined from positive to neutral. But the NYSE Advance Decline (cumulative breadth indicator) is positively diverging vs. the S&P 500. The chart below, courtesy of freestockcharts.com, shows us that the AD line (black) has flat peaks  vs the S&P 500’s recent lower high. So that’s a positive for the market. 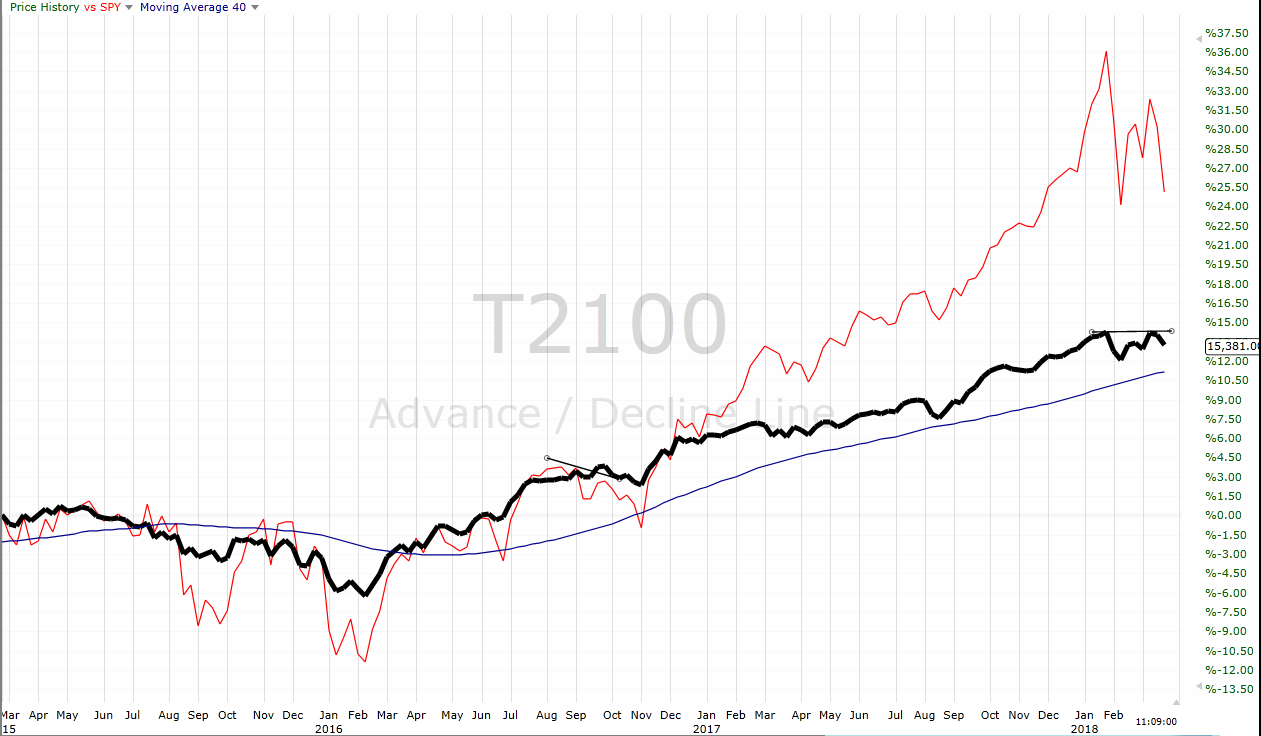 There has been some shift into underperforming sectors of late to keep the AD breath indicator on track. One such sector that is seeing some inflow is the utilities sector (XLU). Note the comparative relative strength vs. the S&P 500 (bottom pane) on the XLU chart.  I’ve put a box around the point of outperformance –which is in line with the recent corrective action on the S&P, and the flat AD line indications. Horn-blowing time here: I noted that sector as a potentially positive chart on this blog a few days ago. 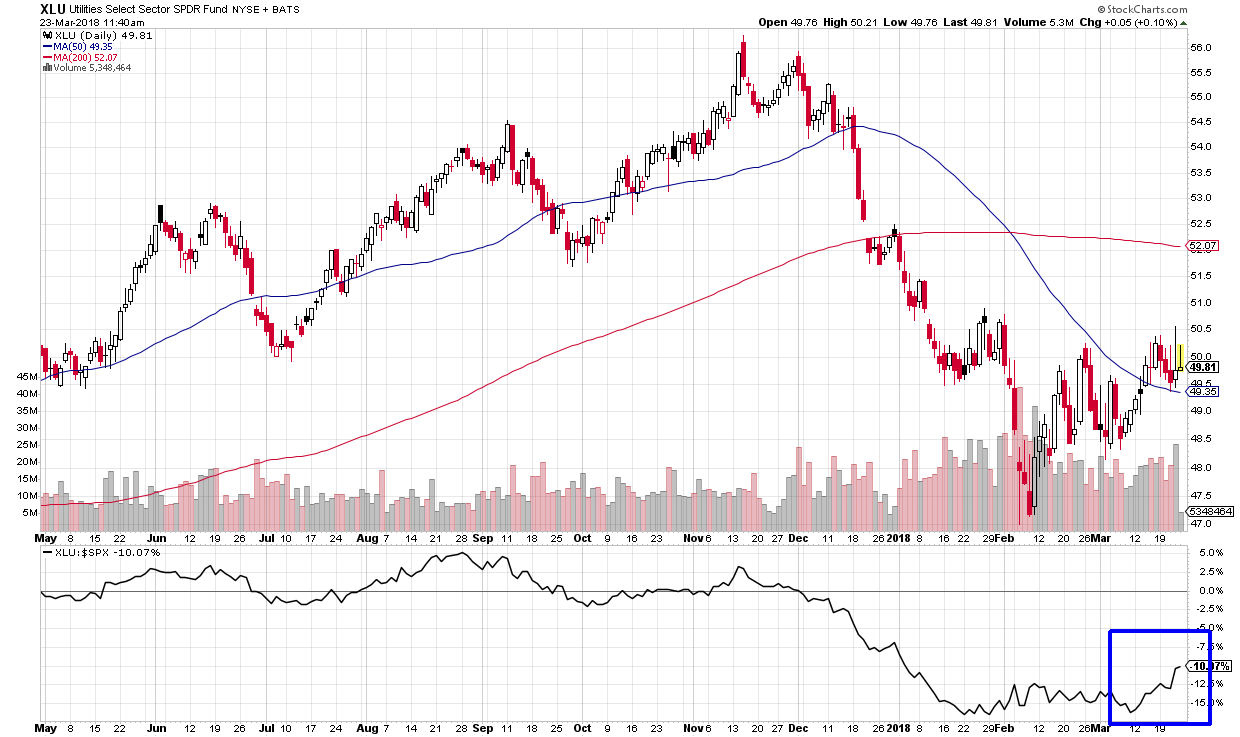 There are signs to be cautious about, but the bull is not rolling over just yet. That can change, so keep an eye on key support levels.

I’ll give you another heads-up on this later in the week, but FYI I’m on the afternoon (1:00pm) MarketCall show next Monday April 2nd. If you have questions you would like addressed on the show regarding specific stocks, I might suggest you email them in ahead of time to [email protected].  Or you can phone in with your questions during the show.

Of note: whether you email or phone in with questions, I do my best to move those who mention they read my blog to the front of the line. 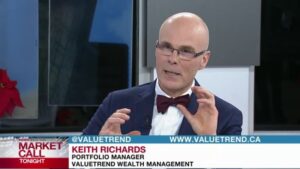