Home / So close you can smell it!

So close you can smell it!

I hurried over to BNN last night to conduct a quick interview, after attending the Canadian Society of Technical Analysts conference all day in Toronto.  Michael Hainsworth and I looked at a couple of favorable sectors, and the “VIX” volatility index – an indicator that has historically proven to be useful in helping determine market directional change.

Interestingly, my own projections for a near termed market rally followed by a potential return of the bear later in 2012 were echoed by many of the highly regarded analysts speaking at the conference.

Technical resistance at the 1220-ish on the S&P500 was broken on Friday. We now need a couple of days follow-up to suggest that this is the true beginning to the winter rally. Seasonally, it is often better to wait until the end of the month(or even early November) before committing cash to the markets. I’m still 25% cash in my equity model. While there is a chance that I will miss out on some of the upside by not buying immediately, ongoing battles over the European debt crises and other political developments suggest exercising patience for a few more days. One negative piece of news coming out of Europe could trigger a selloff. Perhaps the market will like everything it hears over the coming week or so, and markets will move higher. That’s the risk we take as cautious investors, and I’m willing to buy into a rally if that should be the case. These days caution does tend to win out over optimism!

As for the TSX—I will turn to the energy, gold and bank charts for further guidance. WTI crude (chart below) has been in a downtrend since May of this year. That downtrend appears to be breaking, after an oversold MACD signal occurred about 2 weeks ago, followed quickly by an upside breakout of the 50 day MA. It’s probably realistic to target around $95 for oil—this target lies right around old support (i.e. new resistance) and the 200 day MA. So – I do like the look of energy right now, although it may be a relatively short move. Oil’s influence on the TSX is significant, along with gold and the banks. However, none of these are in their period for seasonal strength right now. Technically, the banks (no chart shown) are at best attempting to form a base, and gold (as mentioned in last week’s blog) needs to see the speculators return before the real action starts. All in, I’d give the TSX 300 a much smaller upside potential than that of the U.S. stock indices during an upcoming rally. 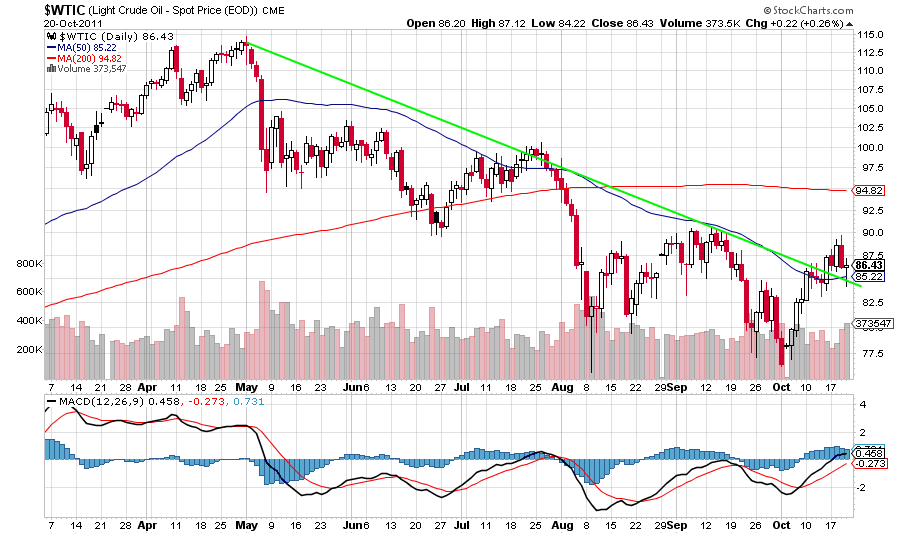