Sentimentrader.com is likely the best collection of sentiment indicators on the web. I’ve subscribed to their service for several years, and they constantly add new services for examining crowd behavior and sentiment on the markets, commodities, currencies, stock sectors, and even individual stocks. One of my favorite compilations that sentimentrader has put together is the “smart money/dumb money” indicator. Here is my last blog where I have covered this indicator.

Essentially, “smart money” is considered to be those investors and institutions who are generally more accurate in their assessment of future market direction. “Dumb money” consists of investors who are less accurate. We want to observe these two groups by comparing their confidence.

I’d encourage you to read the description of these indicators in the green font at the bottom of this blog – copied directly from the sentimentrader website.  Often, “smart” and “dumb” money move together. It’s when they are at extremely opposing views that a potential for higher or lower risk markets might be signalled. The chart below shows us the current situation – and historic sentiment readings from these two groups. You’ll note that the “dumb” money (red line) is well over the “too confident” line. But the “smart” money (blue line) is not yet at an extremely pessimistic confidence level. However, it is clear that the two groups are growing wider in their opinions on the markets. 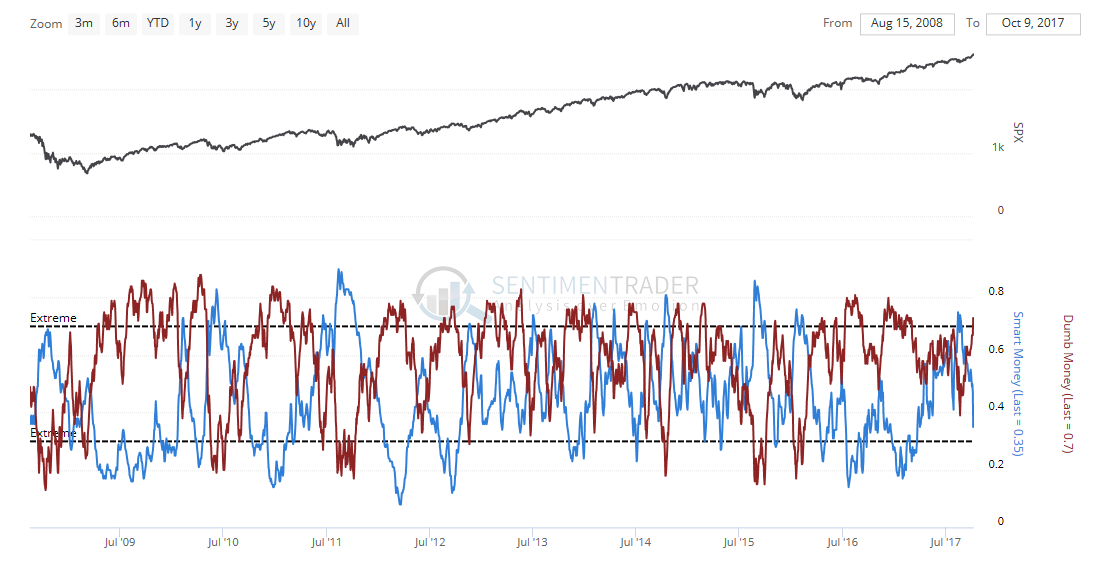 The chart below shows us a spread between the two groups. Its calculated by taking the “smart” vote and dividing the “dumb” vote into it from the above chart. It gives us a ratio of smart: dumb confidence. As you can see on this chart, the line is below the danger line. That’s bad news, but you will also notice that the best signals seem to come from a much deeper negative spread. The current ratio is -0.35. Typically, we see levels of -0.75 for the best signals. Note the false signals I’ve highlighted on the chart below. The 2010 signal did hit near the -0.75 level, but the two more recent signals in 2014 and 2016 were triggered near the current spread. A false signal in my mind is a move below the danger line that is not followed up by at least a 5% correction in the following month or two.

Like all indicators—the smart/dumb money spread can’t be used in isolation – as seen by the false signals it has issued in the past. We may need to see a bit more pessimism on the “smart” side to get us into a deeper danger zone. I’ll be reporting my results from the Bear-o-meter in the first week of November. By then, the seasonal weak period for stocks is over, and we will want to assess the risk / reward potential on the markets  through a variety of indicators such as those used in the Bear-o-meter– which includes the smart/dumb money spread.

Our Confidence indices use mostly real-money gauges – there are few opinions involved here. Generally, we want to follow the Smart Money traders when they reach an extreme – we want to bet on a market rally when they are confident of rising prices, and we want to be short (or in cash) when they are expecting a market decline. The higher the confidence number, the more aggressively we should be looking for higher prices.

Examples of some Smart Money indicators include the OEX put/call and open interest ratios, commercial hedger positions in the equity index futures, and the current relationship between stocks and bonds.

In contrast to the Smart Money, we want to do the opposite of what the Dumb Money is doing when they are at an extreme. These traders have proven themselves over history to be bad at market timing. They get very bullish after a market rally, and bearish after a market fall. By the time the majority of them catch on to a trend, it?s too late – the trend is about to reverse. It tells us how confident we should be in selling the market.

Examples of some Dumb Money indicators include the equity-only put/call ratio, the flow into and out of the Rydex series of index mutual funds, and small speculators in equity index futures contracts. We also chart the spread between the Smart Money and Dumb Money. This gives us a quick view of the difference between the two groups of traders. Because the “dumb money” follows trends, and the “smart money” generally goes against trends, the “dumb money” is usually correct during the meat of the trend. So when the Dumb Money Confidence is higher than the Smart Money Confidence, that means sentiment is positive.

When it becomes too positive, however, then sentiment has reached an extreme, and stocks often run into trouble. This usually happens because the Dumb Money rises above 60%, and the Smart Money drops below 40%. That is a warning sign for stocks.

When the Dumb Money is below the Smart Money, then sentiment is negative and stocks are usually struggling. It’s best to be defensive at times like this. However, when sentiment becomes too negative, then stocks are often poised to rally over the next 1-3 months. This usually occurs because the Dumb Money has dropped below 40% and the Smart Money has risen above 60%.

In practice, our Confidence Indexes rarely get below 30% or above 70%.

The S&P 500 has been in a pattern that is considered bearish by some market observers. This pattern plays off of an old theory suggesting that "dumb money" trades in the morning, while "smart END_OF_DOCUMENT_TOKEN_TO_BE_REPLACED

The Nasdaq appears to be losing momentum as it attempts to break old highs near 12,000. Take a look at the momentum studies under the price chart below.  Note the direction their trends display. Near END_OF_DOCUMENT_TOKEN_TO_BE_REPLACED

Here's a chart illustrating passenger traffic at airports since the COVID crash.  I took it from a Wolfstreet.com article in late Sept. focusing on the proposed airline bailout. Note that airline END_OF_DOCUMENT_TOKEN_TO_BE_REPLACED