Home / Small stocks might be ready for big gains

Recently, the ValueTrend Equity Platform took a position in a small capped ETF. We only took a bit of the position to start with. But we’re seeing evidence for adding to this, and other small capped positions over the coming weeks. Below is a re-print from our Valuetrend newsletter concerning a potential rotation over the coming month or so from large capped stocks into small capped stocks. Do you receive this newsletter? If you don’t, please feel free to click on the newsletter subscribe button on the right side of your screen.  We often cover topics not discussed here on the blog in that update, so it may be of interest to you. Anyhow–here is the writeup:

Perhaps you have heard of the Santa Clause Rally. That’s the tendency for the large capped stock indices like the S&P 500 and TSX 300 to move up strongly through November and December, reaching a crescendo in the last two weeks of the year. One reason for this phenomenon is the movement by institutional managers trying to play “catch up” by ensuring they hold only the best stocks in their portfolios before year-end reports go out.

Simultaneously, you will often see small capped stocks weaken into those last weeks of the year. That’s because of two things. First, the very Portfolio Managers who are buying the large capped stocks are ditching their small capped losers. They don’t want them showing up on their final reports. This, along with retail investors selling their losers to create tax loss benefits to offset any gains they might have materialized during the year.

After the holidays end, we’ll often witness a changing of the guard between these groups. That is, you may notice that large capped stocks take a breather, while small capped stocks start to rally. That’s because the institutional buying pressure dries up after their buying spree ends in December. Meanwhile, the selling pressure on the small capped stocks (and other oversold sectors) abates, allowing bargain hunters to step in and bid the stocks up.  It may be of interest for you to know that this year may be experience a particularly strong tendency for these patterns. That’s because this year, markets have been polarized. Stocks going up went way up. Stocks going down went way down. There weren’t a lot of medium-performing stocks this year. It was go big, or go home. Think of hugely winning stocks like technology and US banks. Then think of huge losers like the Cannabis stocks and energy in the small capped sector. Some of the big names will take a seat in the New Year, letting some of the better quality small capped stocks step up.

OK – so if you buy into the logic of that rotation into small capped stocks, we want to see if it may be setting up from a technical perspective. Here is the IWM chart, which we bought an initial position in. Note the base breakout.

Here’s the seasonality monthly patterns from stockcharts.com since the current uptrend began in 2009 on IWM. Note the best months for the sector are in Q4, then a small pause in January, then strong outperformance in Feb/March to finish the first quarter. Thereafter, the small capped stocks are fairly flat on a relative basis. 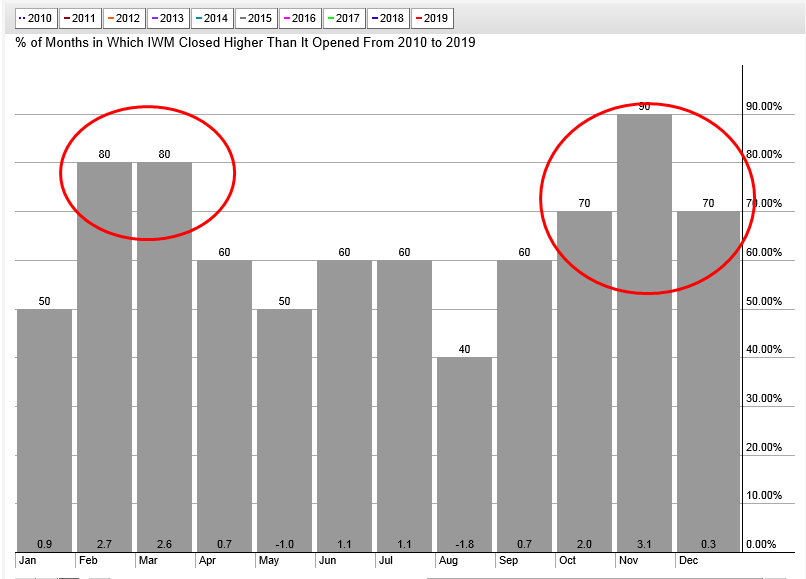 Digging down country by country, we can see the leaders. Check out Denmark’s small capped index. It broke out, and is now facing overhead resistance.

And look at Germany…an early stage breakout. This ETF is super thin, so be aware of that if you are considering it.

Our last webinar on Technical Analysis basics had poor audio, so we promised to re-record it. Here is the new recording of the Webinar we held last week with the audio improved Youtube Link.

Keith Richards will be presenting today at 5:30pm EST today to the Ottawa/Montreal Chapters of The Canadian Society of Technical Analysts. The Bear-o-meter and its components will be discussed in detail. You can register for today’s webinar by using this link .

The same topic will be on another webinar on January 10th 2020 at 2:00pm Eastern Time. Register for January 10th using this link.