Home / Sideways market may not be over yet

Sideways market may not be over yet 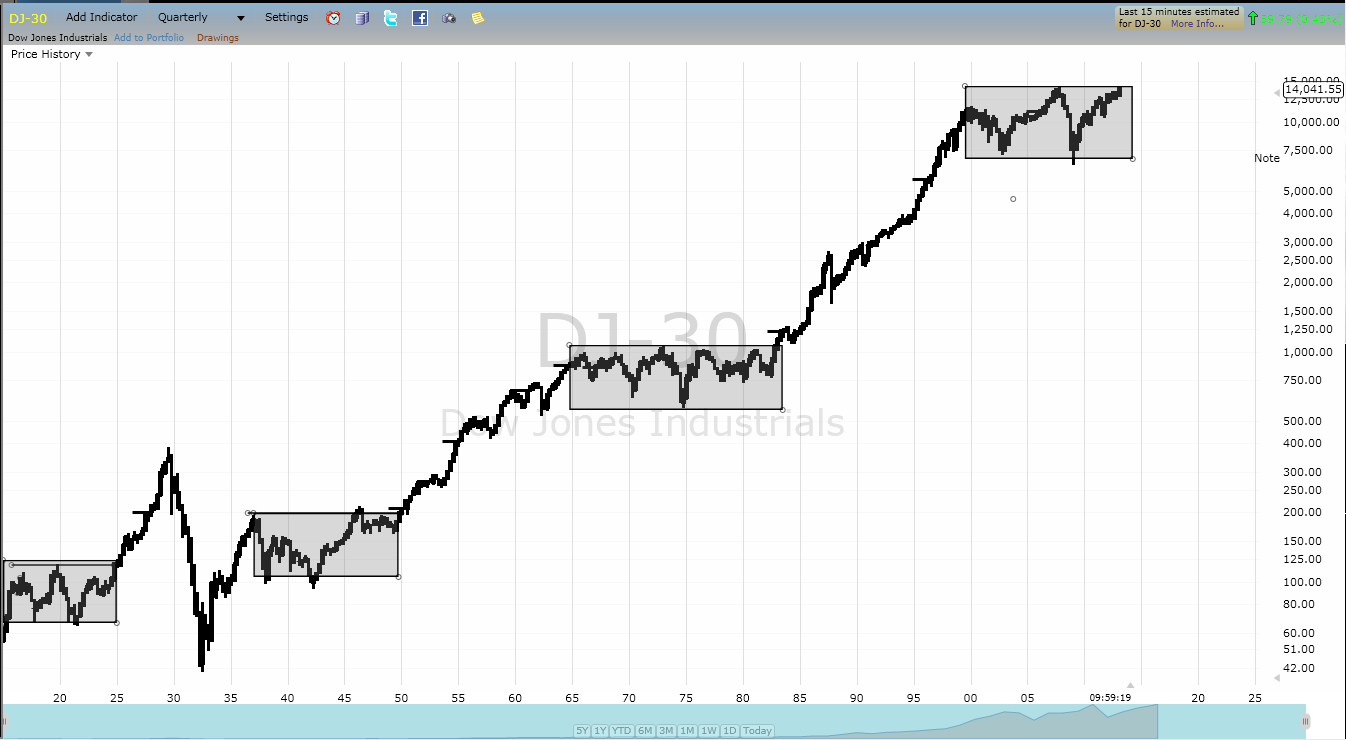 Back in January of 2001, I wrote an article on the history of secular sideways markets in U.S. markets for Canadian MoneySaver magazine. My article was amongst the first studies by a Canadian Technical Analyst to predict the 1999 – current sideways market. Here is a link to that article (note that, because I worked with Merrill Lynch at the time, I had to disclose at the beginning of the article that they were bullish with a price target on the S&P500 for 1700+ – despite my call for a decade or more of sideways markets. Guess who was right?): https://www.valuetrend.ca/wp-content/uploads/2011/06/BULL-BEAR-OR-NEITHER-ARTICLE-MAY-27.pdf

My original thoughts were for the Dow to remain contained at or below 11,500. I was incorrect on my upper limit prediction – but the principal of a secular sideways market was correct. The question right now is, will the U.S market soon break out into a multi-year bull market – as happened after the last two sideways periods? The charts and market valuations may provide clues to answer that question.

Take a look at this week’s long term chart of the DJIA, courtesy of www.freestockcharts.com. We’re some 13 years into the current sideways market. Past sideways markets, as you will see on the long termed chart above, have lasted anywhere from 12-17 years. So we may be closer to the end of the current secular sideways market than to the beginning of it. Thats a bullish argument for the market to break out sooner rather than later. However, observations of the last two sideways markets, which broke into almost 2-decade long bull markets when complete, show an interesting valuation metric prior to their breakouts. Lets look at the last two sideways market breakouts. At the end of the 1936 – 1950 sideways market, the Dow broke out from its 14-year ceiling of around 200. This occurred after the trailing PE ratio on the S&P 500 hit about 7. True, the S&P500 is a broader based index, but the PE level nonetheless did provide a market benchmark for valuations, even when observing the DJIA. The Shiller PE ratio, which is an inflation-adjusted version of the same ratio, also dropped into single digit territory in 1949. The end of the 1965-1982 sideways market was also marked by a single-digit PE ratio, hitting a low point of around 7 in 1980. This low point was earlier than the Shiller PE ratio, which hit about 7, but not until the final washout of the sideways market in 1982. In both of these cases, PE ratios hit single digits before the end of the sideways markets, marking the dawn of multi-year bull markets.

Valuation measurements such as trailing and Shiller PE ratio’s do suggest that markets are not yet at the historic low levels that typically proceed a breakout from a secular sideways market. Moreover, it would appear that current PE ratios are somewhat above their historic mean-average levels – implying a market that is not undervalued at this point. I continue to believe that, while markets may have a little juice in them yet, risk is beginning to outweigh potential reward.

True, the US Federal Reserve has implemented several monetary stimulus programs that may drive markets into a new secular bull market without the traditional conditions in place for such a breakout. However, to quote the great investment icon Sir John Templeton: “The four most dangerous words in investing are This time is different.”

Keith Speaking in Orillia–cancelled due to weather

Seminar cancelled due to snow squall warning – It was going to be at the Orillia Public library at 6:30pm tonight for my “Sideways” book promotion tour.