Home / Should we be buying bank stocks?

Should we be buying bank stocks?

The seasonably favorable time for banks is from December to April, According to Thacrkay’s Guide. As you may know, seasonal tendencies are a statistic, not a trade signal. You need to look at the charts, and the fundamentals before moving on any seasonal trade. Today, we’re going to contrast and compare US banks to Canadian banks for signs  of opportunity… or underperformance. Lets get at it:

I’m using the BMO ZUB (hedged) ETF as my benchmark here. You can see an obvious support/resistance line around $32-ish on the chart. So, at this point the trade looks to be; aggressive investors buying near the bottom of the current range near $27 for a trade to $32… or … conservative investors waiting for the $32 resistance to be broken. Right now the index is below the 40 week/ 200 day SMA implying no new trend yet.

The good news is that moneyflow momentum (top pane), stochastics, RSI and MACD are diverging positively from the flat consolidation pattern in price. I’ve market these incidents with purple trendlines.  This is bullish.

Fundamentally, like everywhere else, rising rates are good for banks.  Sure, rates will slow then stop and eventually pull back in the coming months. But rates will still remain higher than 2 years ago – good for bank profits. The thing we need to watch is for loan defaults etc. Not much news on that in the USA right now. So–when the technical break or trade levels line up, I’d be a US bank bull. 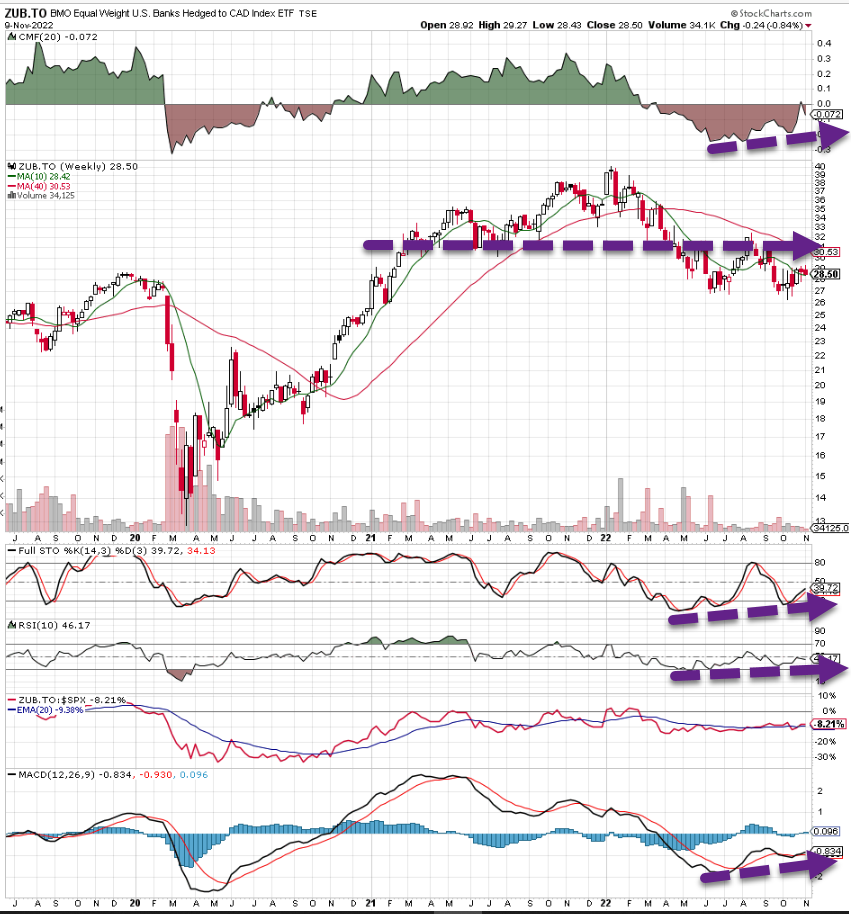 Canadian banks face more risk than their US counterparts. I’ve shared these charts in past blogs. Lets review them before getting to the sector chart itself.

First- we have an unfavorable ratio of housing prices to incomes in Canada vs. the USA. Canadian debt to income ratios are off the charts! Compare this to the 2008 housing bubble in the USA– miles worse off! This is a problem. In fact, we’re already starting to see defaults and liquidity squeezes in home owners/ buyers–not good for Canadian banks! 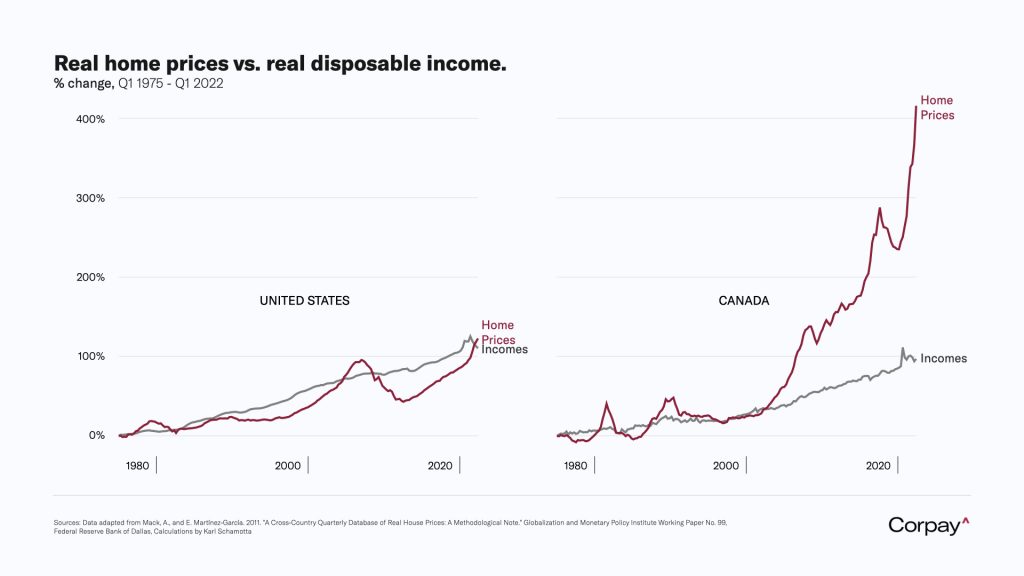 You can see the extreme peak in sales after COVID on the chart below, then the recent decline below their 10 year SMA. Regression analysis suggests that sales could turn back up again.  But I think there’s more downside in sales (and thus pricing) to come before any revival given Canada’s unexpected inflation spike (vs expectations of a drop!) announced in October. High inflation = rates rise and stay high until contained. This can lead to more liquidity squeezes like we are starting to witness in Canada. The Canadian inflation rate came in at 6.9% for October vs 6.7% expected.  Core inflation was also much higher… 6% vs 5.6% expected. The prior month was revised higher as well from 5.7% to 6%. This was covered in my Canada turn” blog here. 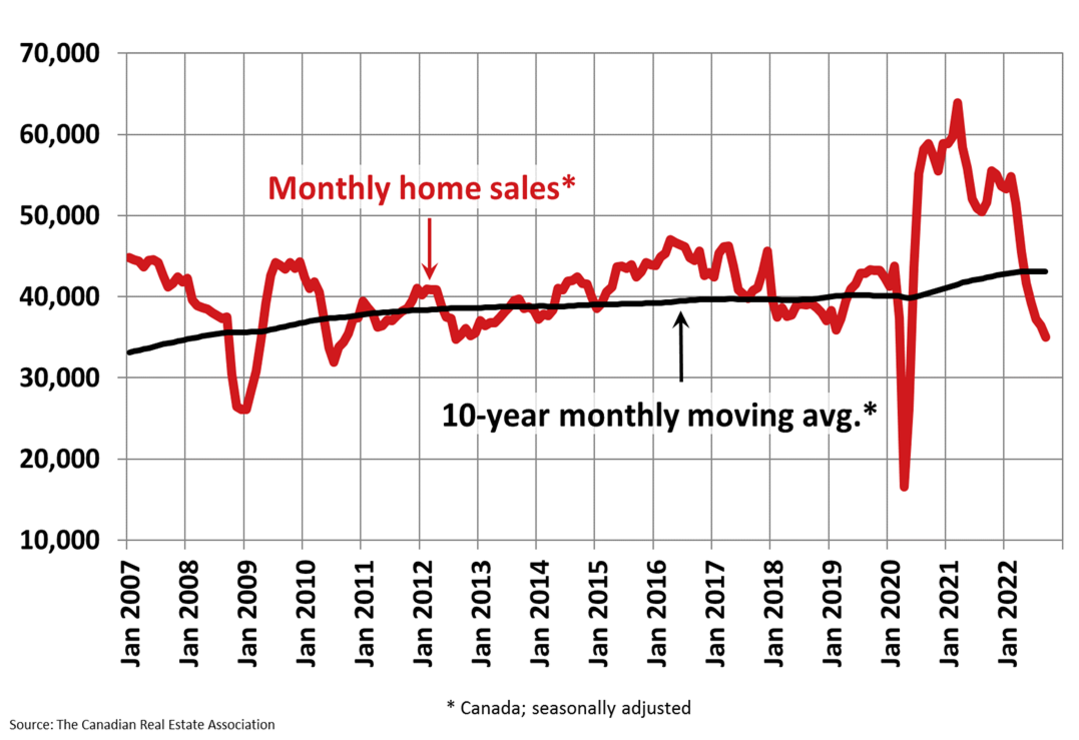 OK–the fundamentals are pretty lousy for Canada’s banks–so what about the chart?

The BMO ZEB chart looks pretty similar to the US bank chart. One key difference was the spike lower on the recent trough low. However, we have positive divergence in all of the indicators. Note, however, that this divergence is far less pronounced than that of the US bank chart–especially on MACD. That indicator is hardly moving on the ZEB, whereas the ZUB has very strong MACD divergence. 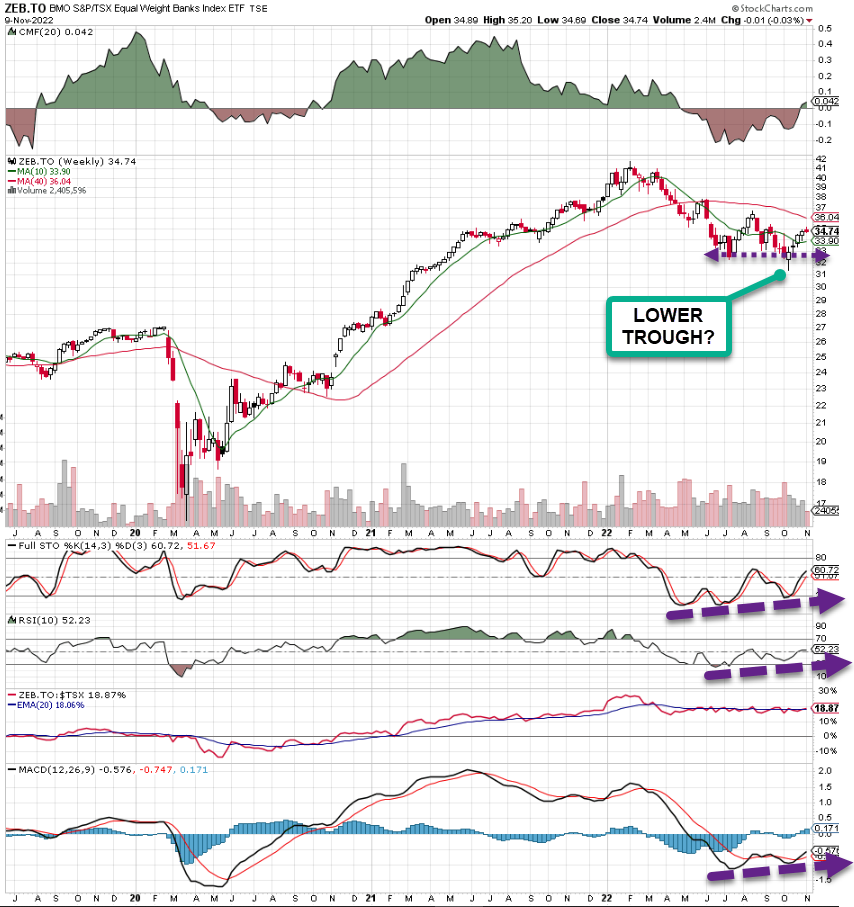