One more observation: Positive emotional reaction to gains in our portfolios pail when compared to the negative emotional reaction to losses. Loss aversion as a prime emotional motivation is a key notation taught in behavioral psychology. Studies show that we would rather run after the thief who just stole our pink flamingo lawn ornament, than work an hour overtime at the office.  Working that hour would likely buy 2 new pink flamingos (or more, if you are in the 1%!).

We all want to make more money, but studies prove that loss aversion trumps the desire for gains. Its one of the reasons why markets often fall harder than they climb (the old expression is they take the elevator down, and the stairs up). Investors bail quickly in order to avoid losses (or so they think….). The end goal is for  contentment. Losses endanger that vision.

While on the topic of avoiding losses, I thought I’d take a look at the neartermed timing picture for the SPX. I use a series of indicators on the daily chart to verify if the market is temporarily overbought or oversold. Its not a long termed timing kind of thing – its just something to take note of for opportunistic trading.

I keep tabs of the following:

When all three conditions line up in one direction or the other (eg – upper BB touch, upper RSI touch or break, upper stochastics break) we get an indication that the market may be setting up in the very near term for a minor (not major) reversal.

That is where we are right now. As you can see on the chart below,  the SPX has been riding the upper BB band for about a month (as it often does). Meanwhile, stochastics and RSI are both hitting and retreating from their respective overbought zones. The chart has red vertical lines indicating where these conditions have occurred in the past. Most of the time, you do get a move down.  Some moves are large, and some very small. Large or small, you usually see some sort of a negative move after these three indicators line up. Adding to that is the fact that the BB’s are pinching closer together. This occurs when the degree of up/down movements on the market is shrinking (volatility is shrinking). That condition usually doesn’t last. Volatility often returns after a “pinch”.

The market looks primed to pull back a bit soon. The three indicators on the chart indicate a probability of such a move. On the ValueTrend newsletter, which we just sent out to subscribers yesterday, we noted another factor that might influence markets over both the short and longer terms. I noted how we at ValueTrend are positioning for it. My bottom line advice has been to try and take advantage of such a move. If you don’t subscribe to the newsletter, here’s the link. 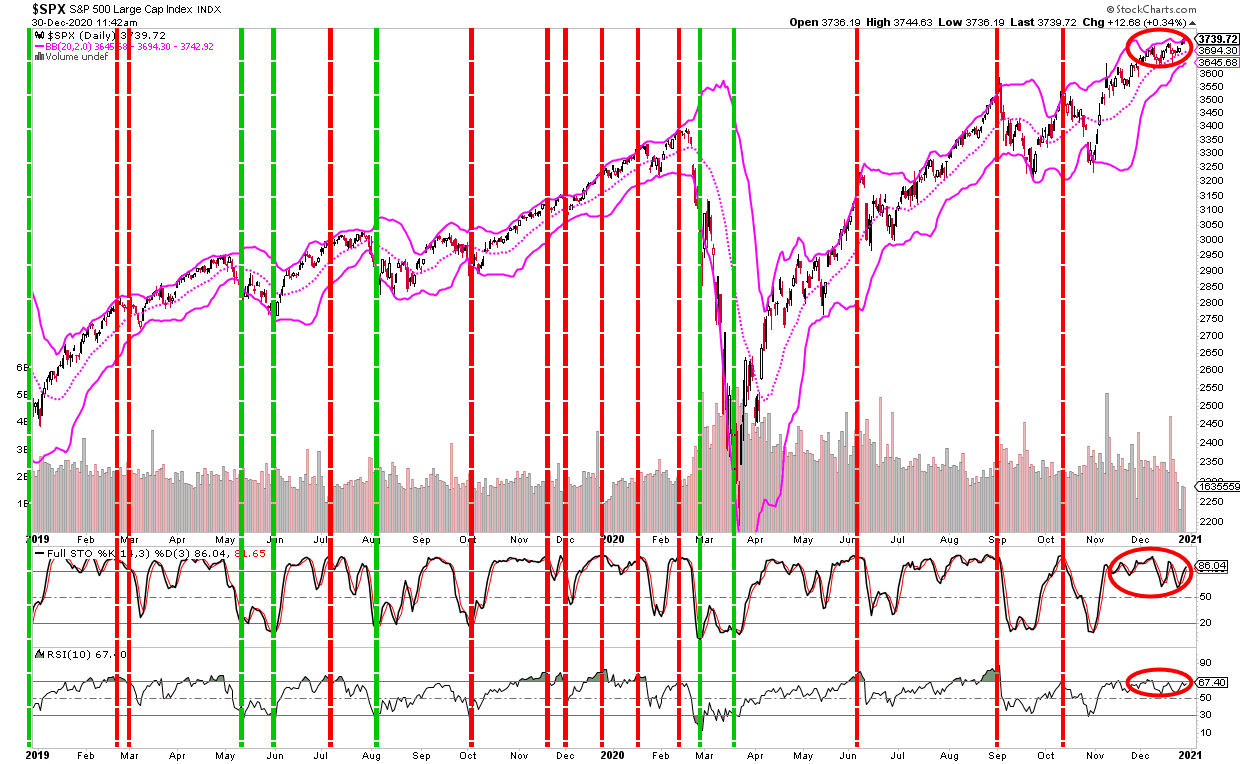 Please check the ValueTrend website on Friday – where the first weekly video recap of the blog will be posted. I would like to hear what you think of it. Please post comments below after you see this inaugural weekly recap. Was it too long? Too short? Any suggestions? This is a new initiative and I’d like to make it as valuable to my readers as possible.

Finally…Have a great New Year weekend. I hope for all of us that 2021 is a year with less drama, and more normalization.