Sell the rip, buy the dip?

I hope you watched my Market Alert video from early last week. If you did, you were forewarned about the volatility that we experienced later that week and early this week. Sell the rip, as is said. So, now that a dip has happened…should we buy the dip? What’s next for the markets? I’ve put together some thoughts on those questions below.

To start, I might suggest that if you do not already subscribe to the ValueTrend Update newsletter, you might want to here. Its published periodically, and read by more than 2200 subscribers who enjoy greater insights, including invites to Zoom webinars. Today, we are sending out a macro market analysis in the  newsletter. Hope you are a subscriber, as this one will be informative.

Today, I will take a look at the current moves from a birds eye view of the monthly charts, and then work down to the daily charts. Are there clues to how we should approach the pullback suggested on last weeks video? Was the pullback a one and done, or is there more to come? Hey – that rhymes! Let’s start with a bigger picture look at the market: 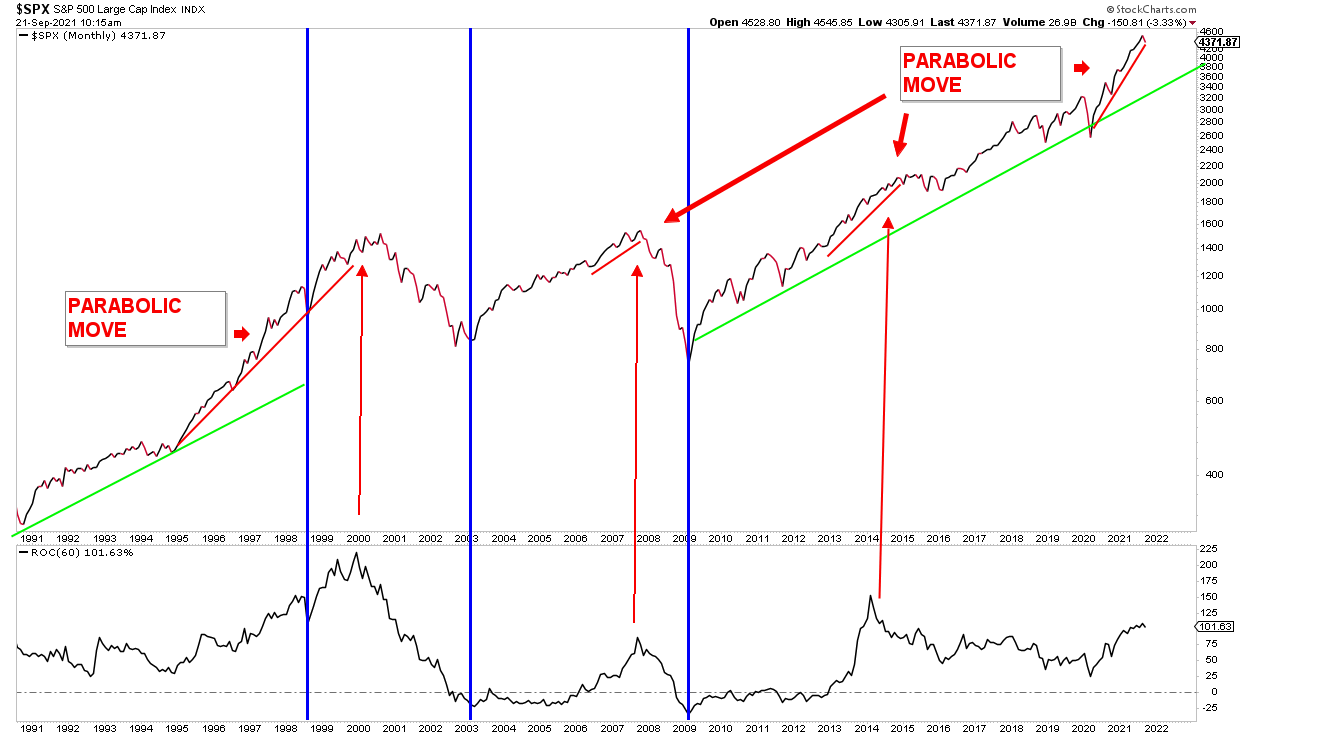 The chart above illustrates the parabolic move of late. I mentioned in this blog, parabolic moves with little volatility tend to end with a corrective period. But… in order for that overdone angle of ascent to correct itself, the trend must end. The trend is your friend until it ends. And that would mean a lower low and a lower high / break in the trendline. That hasn’t happened yet -even within this contained parabolic trend. The arching trendline (red) to the right of the chart shows us that the correction of late brought the SPX back to, but not below, the trendline.  Further evidence is the slowing ROC (Rate of Change) line at the bottom of the chart. It is NOT in a “V” reversal – which has indicated major bear markets- per my red arrows. This momentum tracker is indicating that the bigger picture is still OK for now, despite any immediate pullbacks. OK, now lets look at the weekly chart: 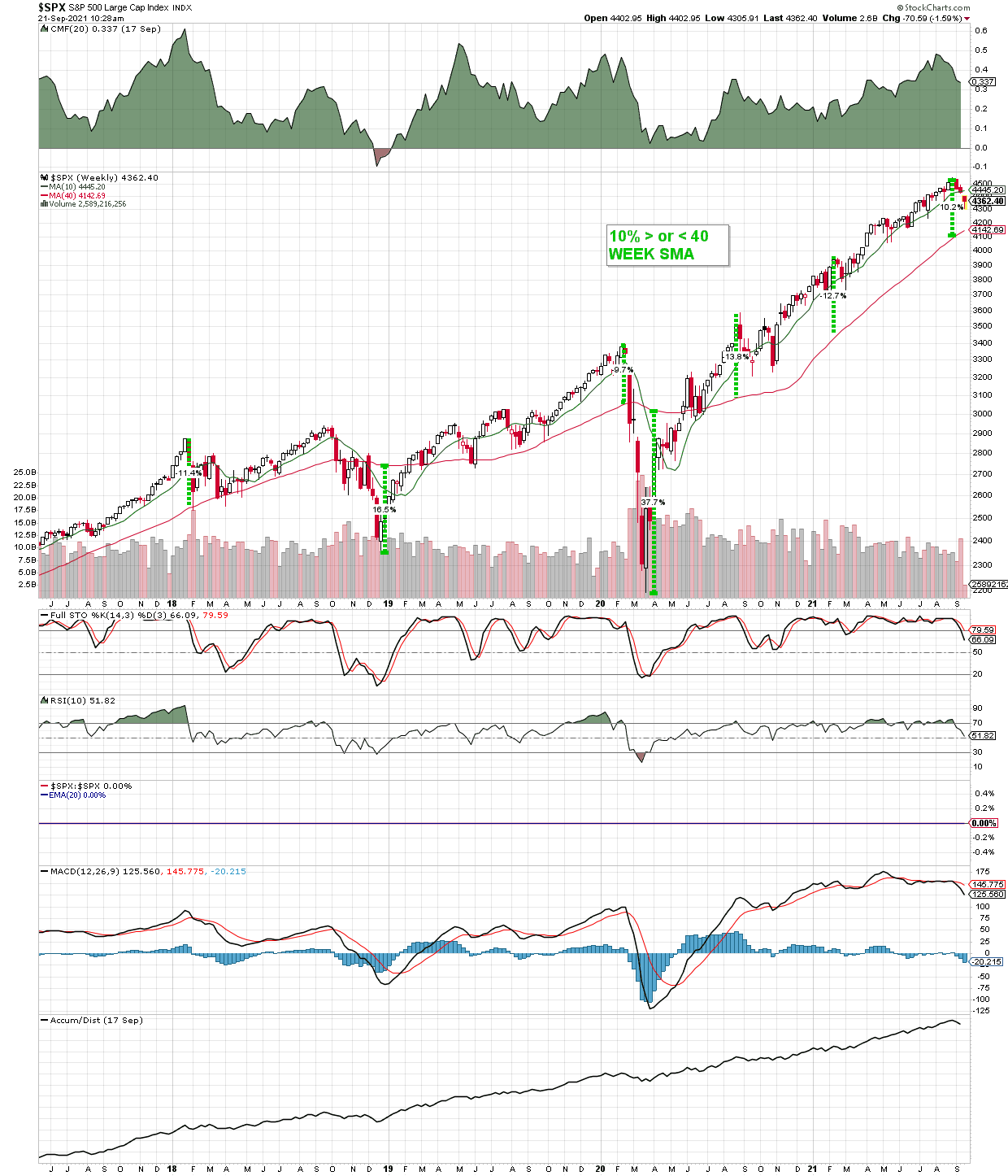 The weekly chart above has an array of indicators on it that I tend to use regularly. One of my “cautions” is the SPX % distance above the 200 day (40 week) SMA (Simple Moving Average). If the market is over that SMA by 10% or more, the market is overbought. It reached that level in August, and has drifted down since that time. The SPX has not taken out its last low and appears to be on trend on the weekly chart.

However…Of concern in the above chart are the rounding momentum indicators. I get particularly concerned when MACD rounds over. Its early yet, but the signs are there that this may be occurring. Meanwhile, moneyflow trend is good (bottom pane) despite waning moneyflow momentum (top pane). Conclusion: The mid termed view is on trend, but momentum studies are weakening. This may imply danger ahead, but its too early to determine.

I’d like to look at the daily chart of the SPX. But first, lets look at market breadth. I could pull up the NYSE breadth as a broad indicator, but since we are talking about the SPX, I chose to look at the A/D (Advance Decline line) of the SPX. The daily A/D chart for the SPX suggests trouble is brewing. The A/D line has broken its last low and has broken its 50 day SMA (blue line on chart). The 50 day SMA has supported this line for the last 12 months. Last September, it broke and the market (which was in a correction) moved another leg lower to complete a 10% correction. The current correction to yesterdays low is less than half of that. Could we see another 5% downside?

Below is the daily chart. You can see by my green horizontal line that the SPX just took out its last low and also took out its 50 day SMA. Momentum indicators like stochastics and RSI are oversold, indicating a neartermed bounce. But MACD is decidedly bearish, and its a bigger picture indicator. Moneyflow (bottom pane) is weakening and the moneyflow momentum indicator is weak – you will note that it can remain weak for a while as corrections persist. The daily chart shows us that there may be an oversold bounce. 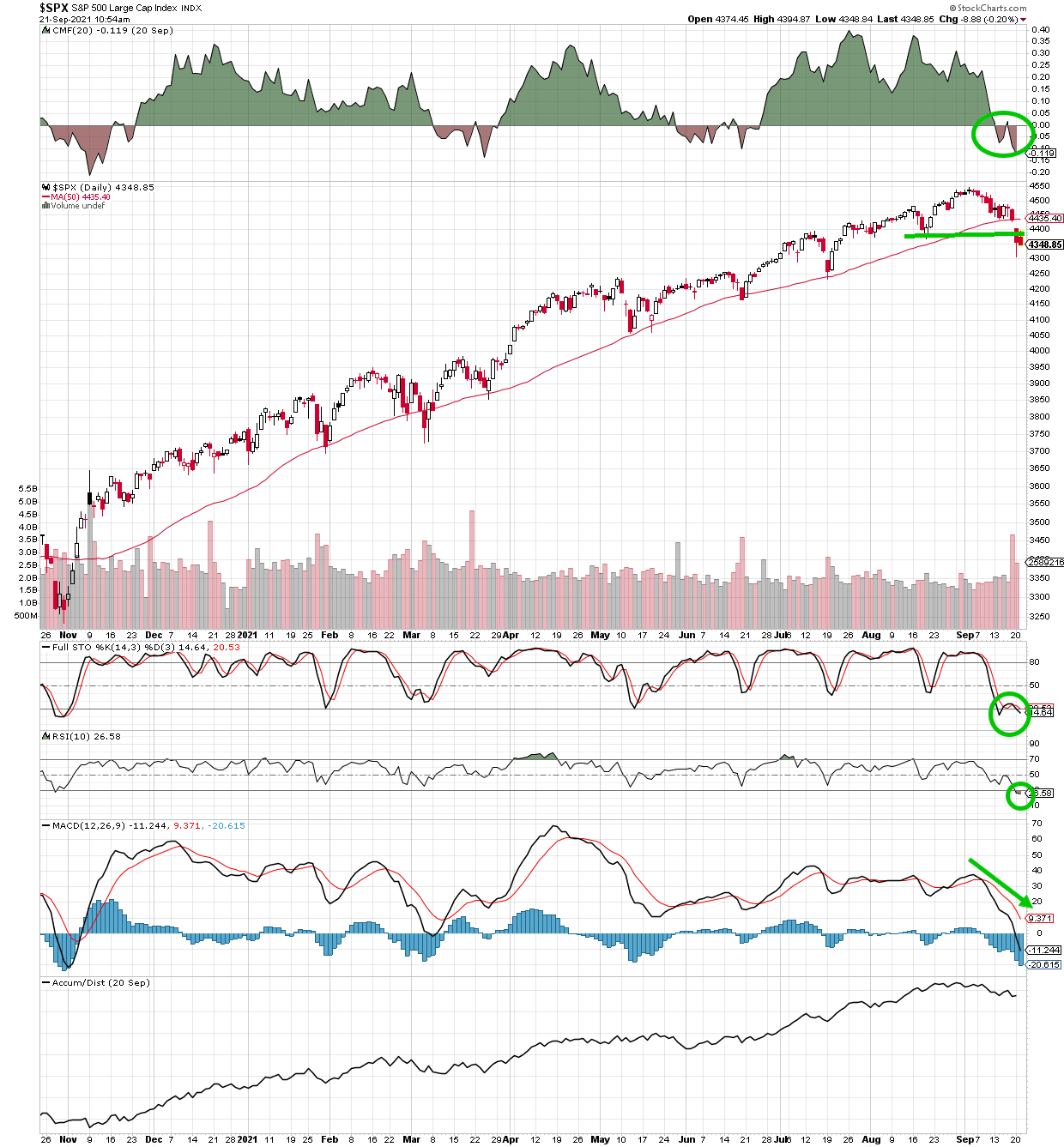 The expression of late has been “Sell the rip, buy the dip”. I think its too early to say that this dip should be bought. The last two weeks of September can bring seasonally bearish moves. I don’t think there are enough positives in the neartermed charts above to suggest buying yet. But, then again, I have been fooled by greater fools than I in this market. Today begins the Fed meeting. Accommodative verbiage later in the week might push markets back over their buy-signals. Or not. We are still holding our 15% cash, and not buying this dip …. yet. Just in case you were wondering.