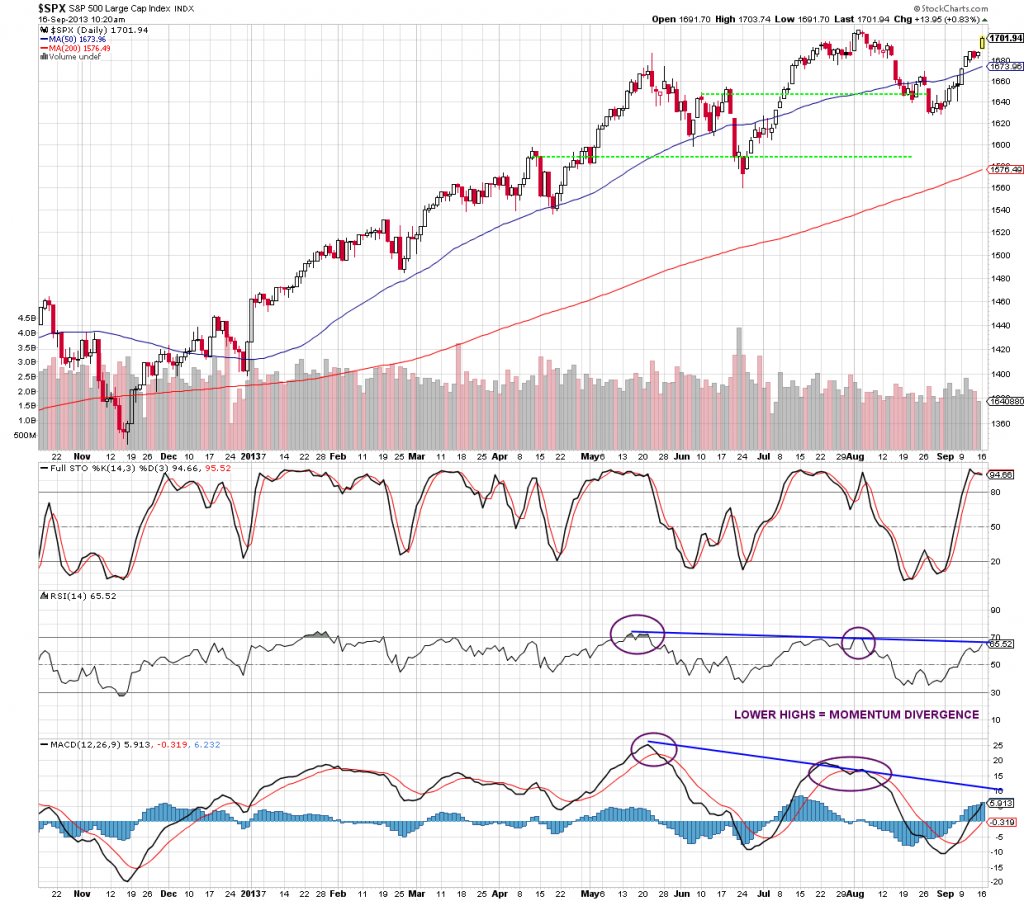 The next two weeks may prove to be a bit more volatile than usual. However, they may also prove to be a good buying opportunity. Perhaps this Wednesday’s Fed speech will trigger some type of market reaction. The consensus view is for a relatively slow start to the QE tapering process. I’ve read that $10BB – $15BB in tapering is expected. This is probably built into the markets, as witnessed by recent market strength. More than the expected amount of tapering may spark a dramatic selloff. My question is, what happens if the consensus view is right? Will there be a knee-jerk “sell on the news” reaction by the markets? Time will tell.

Both short term (stochastics) and mid-term (RSI & MACD) momentum indicators for the major US indices such as the TSX and S&P 500 are overbought, but haven’t been rounding over just yet. I’ve noted in past blogs the divergence within some of the slower-moving momentum indicators such as RSI and MACD. Note how these indicators have been making lower highs and lows, while the S&P rose. My friend Don Vialoux noted on his blog www.techtalk.com that the second half of September is usually the weakest period for North American indices. This, in combination with weaker breadth (as noted on this blog:https://www.valuetrend.ca/?p=2415) , suggests at least some level of cash is warranted for the next few weeks. Technical support, should the markets follow their typical seasonal weakness in the next few weeks, lies at 1640, then 1590.

I continue to hold a high allocation of cash, which has been an exercise in discipline this summer given the market strength. However, a discipline is a discipline, and one must adhere to it if the results of following such a strategy over the long run are proven. I expect to leg into the markets over the month of October, the timing of which will depend entirely on how events unfold over the coming weeks.

The S&P 500 has been in a pattern that is considered bearish by some market observers. This pattern plays off of an old theory suggesting that "dumb money" trades in the morning, while "smart END_OF_DOCUMENT_TOKEN_TO_BE_REPLACED

The Nasdaq appears to be losing momentum as it attempts to break old highs near 12,000. Take a look at the momentum studies under the price chart below.  Note the direction their trends display. Near END_OF_DOCUMENT_TOKEN_TO_BE_REPLACED

Here's a chart illustrating passenger traffic at airports since the COVID crash.  I took it from a Wolfstreet.com article in late Sept. focusing on the proposed airline bailout. Note that airline END_OF_DOCUMENT_TOKEN_TO_BE_REPLACED