Brooke Thackray put out an interesting report (click here)  on the health of the stock market. It’s worth reading. His basic premises is that this year there is an even greater potential for a weak summer (i.e. the “worst six months”).

Today, I’ve posted a chart, courtesy of www.stockcharts.com, for the DJIA’s monthly seasonal patterns since 2000 (tech bubble). As you will note, May can be one of the weaker months, with only about half of all May’s being positive (56% of  May’s since 2000). June is the more concerning month, given its performance since 2000. Only 29% of all June’s have been positive since that year – which puts it ahead of September for the “Most likely month to fail” award. It’s probably worth noting that, despite the greater number of June failures, those poor performing Junes are on average not as bad as the poor performing Septembers. So it’s an arithmetic (i.e. the average number of poor month’s) problem that June faces, not a geometric (i.e. the extent of the pullbacks, if one occurs) problem. September tends to contain some of the bigger market meltdowns on a percentage basis –  despite having less of them. 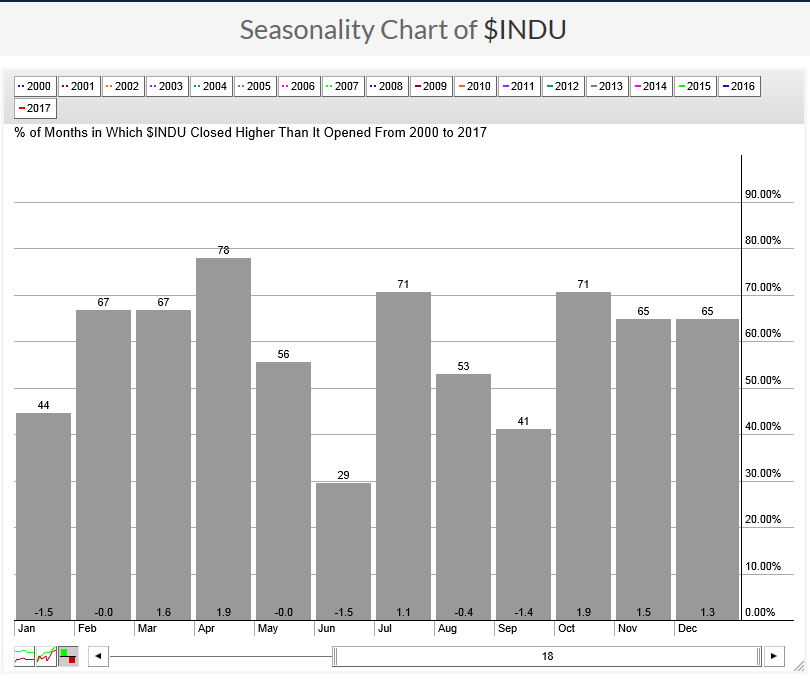 Thackray’s 2017 Guide tells us that since 1950, the average return for June has been 0.0% to 2016.  Meanwhile the average September’s return was -0.5% since 1950. Mathematically inclined readers will see that September’s bigger pullbacks offset the fact that there are less of them than in June. Whatever the case, this study suggests a greater probability of weakness in June – even if its typically not an aggressive pullback.

We’re up to 28% cash in the ValueTrend Equity Platform at this time. I’d expect to be selling more equities in the coming days and weeks.

The Bear-o-meter read a cautious "2" last month. That reading on June 9th  turned out to be a decent reading, given the volatility we have seen since then. The arrow on the SPX chart below shows the END_OF_DOCUMENT_TOKEN_TO_BE_REPLACED

"Growth" stocks appear to be rather overbought when compared to their "Value" stock siblings. The chart below is that of the iShares Morningstar large capped growth index ETF (JKE). Its top holdings END_OF_DOCUMENT_TOKEN_TO_BE_REPLACED

Equal weight indexes give the same weight to each stock in the index.  Both small and large companies are given an equal  "importance" in the index. Most indexes are not the equal weight type. For END_OF_DOCUMENT_TOKEN_TO_BE_REPLACED