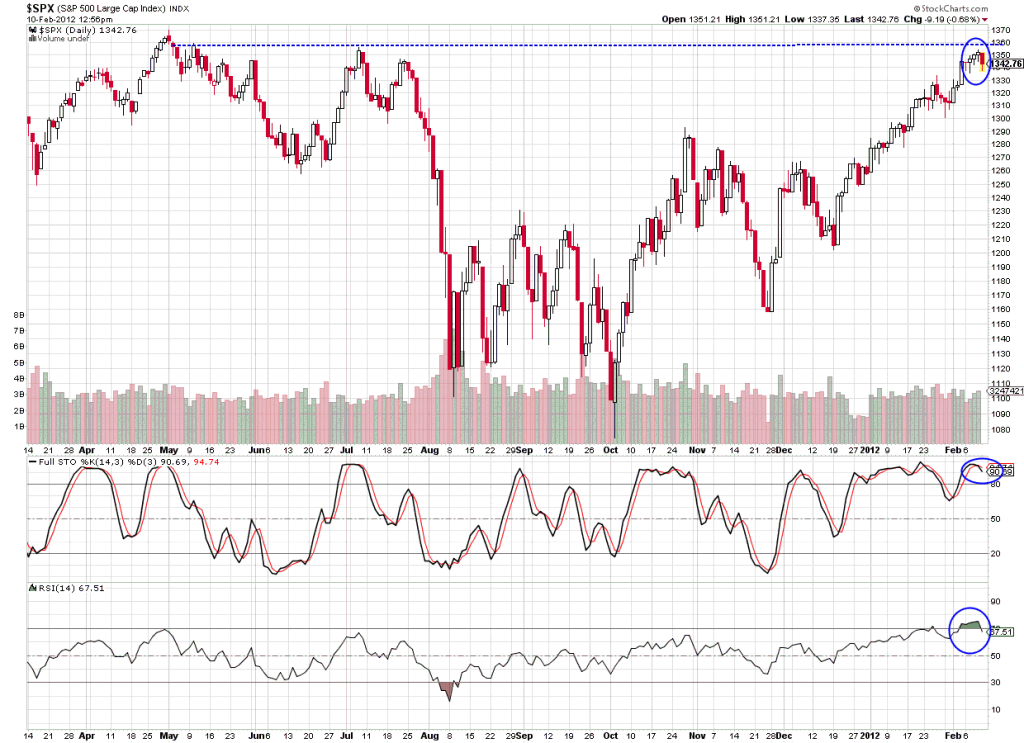 I guess I sound like a broken record lately. The broader markets in North America are overbought. Yet, they refuse to stage a healthy correction. The last correction on the S&P 500 took place from early to mid-December (a 5% pullback), following an 8% correction during November. The index has advanced since the December correction in an extremely tight line. Witness the high white-candlestick (up-day) count and lack of volatility, which you can see visually and through the dramatic drop in the VIX – although I do note a small rise in the VIX of late – today’s pullback adding to that indicators rise. Momentum indicators such as RSI, MACD and Stochastics have been overbought for 2 weeks, and may just be starting to round over. The S&P 500 is also within spitting distance of its summer highs, which represent a fair chunk of resistance.

Its extremely rare to witness a market not take a break when displaying these characteristics. As such, I’ve reduced the risk for the equity portfolio I manage professionally through owning a few more low beta and dividend paying stocks, along with holding about 20% cash. I’ve got a shopping list of stocks I’d like to buy upon a correction into the 1280 – 1300 area for the S&P 500. Don’t be surprised if a correction occurs very, very shortly on the markets.  BTW–I had to post late this week due to a holiday, but I’ll be back on Monday per usual next week.

Some like to play with fire. For those folks, there's always day trading, or buying into a momentum play. There's also investing in themes. Back in the late 1990's the big investment theme was "dot END_OF_DOCUMENT_TOKEN_TO_BE_REPLACED

Below is a chart of the Bear-o-meter signals since 2019. Back in the earlier years readings were taken roughly quarterly. As such, the signals noted were far apart.  I found the END_OF_DOCUMENT_TOKEN_TO_BE_REPLACED

This summer I was harping on - what was to me - an inevitable shift out of the "stay at home/ technology/ FAANG" names into value. As readers know, I was emphasizing value stocks and re-inflation END_OF_DOCUMENT_TOKEN_TO_BE_REPLACED