Home / Run for the hills?

Run for the hills?

You guys know the scoop with the Bear-o-meter. Every month I post the results of this multi-dimensional quantitative risk/return market indicator. The meter has 11 indicators covering the broad factors of trend, breadth, breadth-momentum, value, seasonality, and of course, sentiment. A score of 0-8 is assigned, and this gives us a pretty accurate picture of the current risk/ reward tradeoffs for the SPX at any given point.  Please note that the Bear-o-meter is a valuable tool for market prognostications, but its  NOT something to be relied on in complete isolation from traditional technical trend analysis.  That is, if the meter says high risk but the market is clearly in an uptrend, it is ill advised to reduce equity by much or at all. Trend trumps all. The Bear-o-meter offers its strongest signals when it backs an existing bull/bear trend signal. Like it did in early April and May. 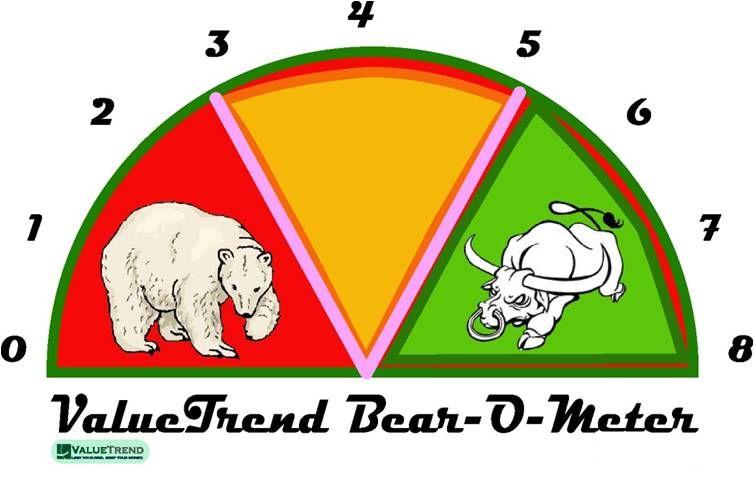 Anyhow, on with the show. This month’s Bear-o-meter reading is a little later than usual. Truthfully, its been busy around the office at ValueTrend. Its in bear markets that ValueTrend tends to show our greatest strengths, but to perform as well as we have, there is a greater level of strategy involved. For those interested, here are our May gross (pre-fee) results. Our clients pay fees according to the assets under administration, but suffice to say that after fees at any level, our performance is thriving in this market. So far, so good, anyhow. We continue to follow our discipline. And part of that discipline involves the Bear-o-meter.

Today (June 9, 2022) we see a Bear-o-meter reading that seems to be repeating the past few months of dire warning risk ratings. The current rating of the Bear-o-meter is “0”.

Last month, I noted the meter had moved from Aprils “High Risk” alert of “0” to a still risky “1”. I noted on the blog that the small change suggested a neartermed bounce. This, in conjunction with some candlestick bottoming signals discussed here. What does today’s reading suggest? Mostly, in my opinion, that the market is still entrenched in a bear phase. It also suggests that the recent rally, noted above, is done for now. However, take heart. I had a great interview with seasonal and technical analysis guru Brooke Thackray. That interview will be posted in the next few days as a video, and you REALLY need to watch it. I’ll post a blog when its ready. One of the things that came out of our discussion was the tendency for markets to be soft in the middle part of June, then have a good solid rally from the last few days of June lasting into mid-July. So, the Bear-o-meter seems to agree with Brooke’s seasonal observations. Near termed elevated risk, followed by another tradable rally possible. From there, well…you’ll have to watch the video for those insights!

The factors that moved the needle this month were a very minor positive coming from the cumulative Advance Decline Line. I assign a positive point whenever it stays over the 40 week SMA. It had been below its SMA last month, but has managed to squeak just ahead of that trend indicator, affording a “+1” to the meter.

On the other hand, and this is where your negative point is coming from to bring the reading from “1” to “0” 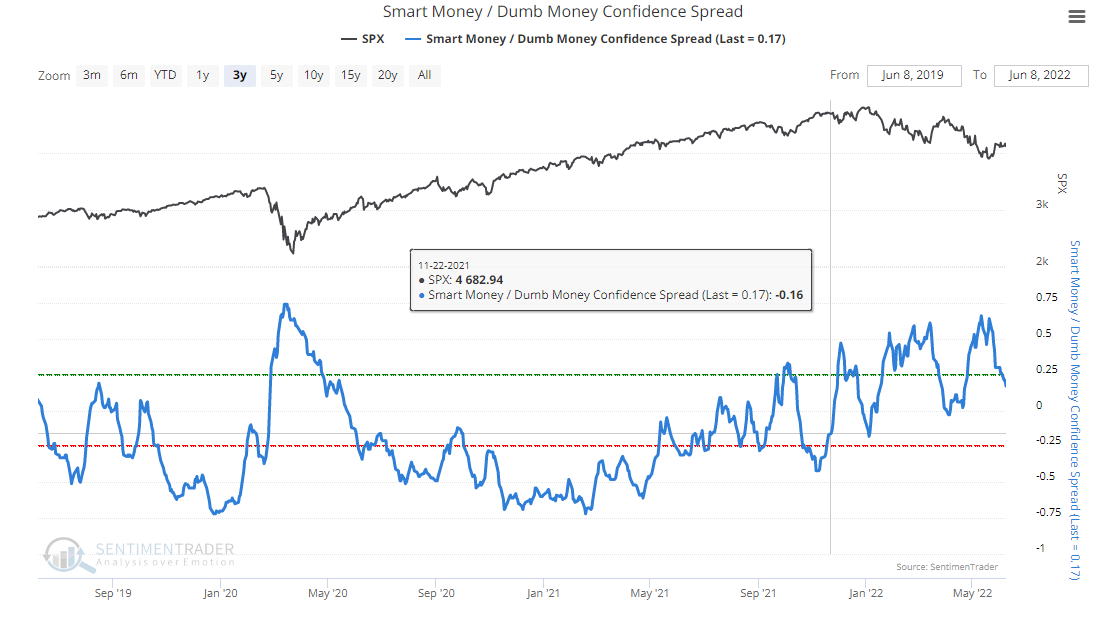 Its too late to run for the hills. If you listened to me in April, you have already done so… You have moved into your market bomb shelter with your large supply of cash, and perhaps some canned beans and dried goods along with ample water supply to support you for the remainder of this bear market. If you didn’t read my blogs earlier this year – well, there’s always time to trade these rallies.

We went to 28% in our equity platform, then bought a few things after my tradable bounce signal. But we are still at 20% cash. There’s a good chance that June may see more downside, negating some of all of my profits on the recent trades. But we view any pullback as more of an opportunity to add to the trade for a potential July pop. Truthfully, we’re only up about 4% on the index – hardly worth the trade.  That, and one of our trades was in a rare producer earth play that has less correlation to the markets. So, we will see if its wise to add to the index play as June progresses. Whatever the case, we like our cash, and we like our inflation positions. BTW–for those interested, while we still hold energy, we have reduced our exposure recently given the strong overbought status of the group. Its been fun making the profits, and we like the big picture for the sector, but there’s an argument that could be made for a pullback. Brooke and I spoke about this in the upcoming video. Again, this video is one you don’t want to miss.