Home / Are rising VIX and gold prices the sign of trouble?

Are rising VIX and gold prices the sign of trouble?

Below is a chart of the VIX since 2013. I’ve drawn a horizontal line at the level of 21 to represent  the “Overly pessimistic/ too much fear” point. As the VIX has spiked above 21, it has tended to represent a market that has sold off too far.  It illustrates that too much fear is built into the market. The other horizontal line I drew is at the level of 12. Spikes below 12 are considered a level that it “Overly optimistic/ too much complacency”.

You will note that the upper “fear” zone spikes tend to be just that—spikes. They don’t last long. They are actually pretty good buy signals, but you have to move fast to catch them. On the other hand, the lower “complacency” zone tends to see longer periods of investor overconfidence. Markets can remain overbought / under-feared for longer periods of time. However, after extended periods of complacency, the market has typically corrected. 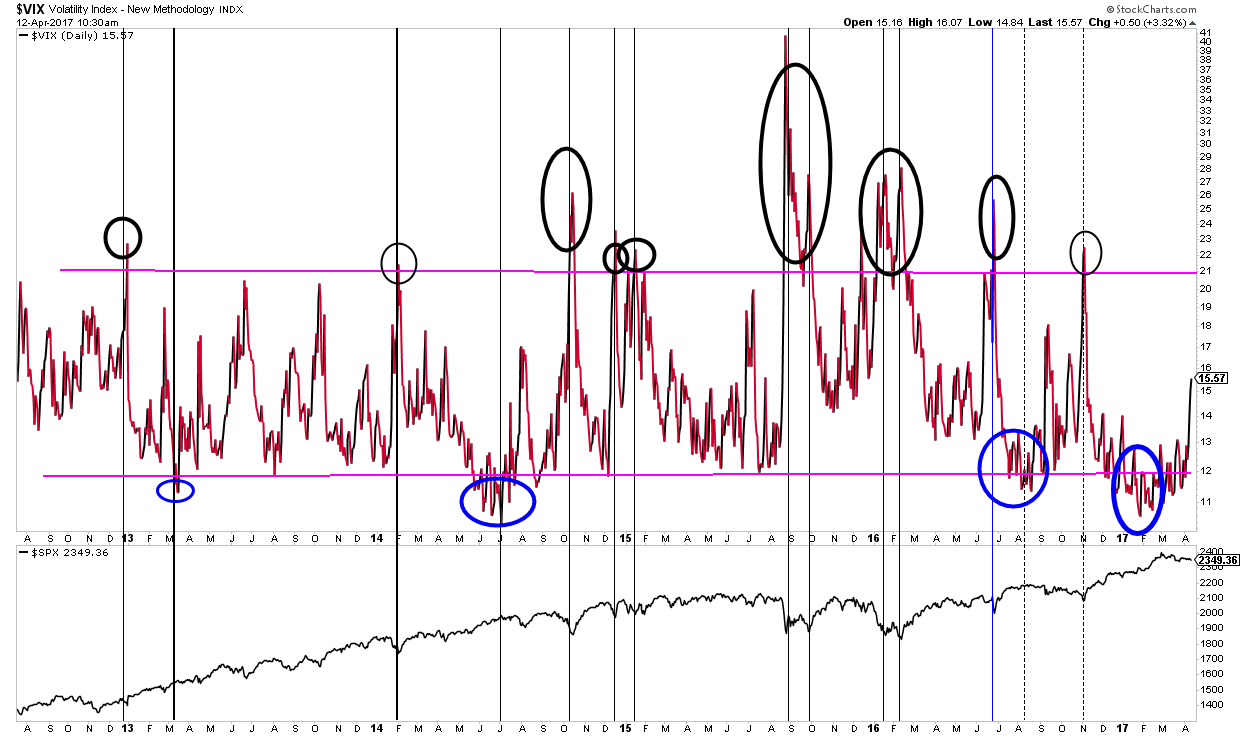 You can see on the chart where I’ve circled both incidences. Generally, the VIX is a decent indicator for potential market rallies or corrections. But it’s not perfect- and that’s why I tend to use it within the context of a number of indicators – hence my creation of the “Bear-o-meter”. Do a search on this blogsite using that name and you will find my past readings of that compilation. I will be reporting a new reading of the Bear-o-meter in a couple of weeks.

My reading on the VIX right now is that its move certainly suggests more volatility in the near-term. But the fact that it’s come out of the “complacency” zone also suggests that such as correction – as has happened in the past (study the chart shown) – may not be too deep just yet. We’ll need to see other bearish indicators line up with the VIX before we need to head for the hills. Having said that, I do expect to begin reducing my market exposure in the coming week(s) in line with the seasonal patterns. But nothing too extreme just yet.

Gold is sometimes considered an asset class that investors will move into if they become fearful of the stock markets. So gold tends to be a nice tie-in to the VIX level. The VIX can be called the “fear gauge” – and gold can be called the “doomsday” asset – given the theory that it will hold its value in times of great peril or uncertainty. While its true that the long termed trend for gold is bullish IF and ONLY IF the stock market is experienced a similar long termed soft or bearish period – gold is not the kind of thing you want to hold for too long if the long termed stock market trend remains bullish. Here is a study I did back in 2013 on this blogsite that I hope enlightens some of my readers to this reality.

The fact that the stock market meets my rules for being in a longer termed bull market suggests that gold is currently best viewed as a short termed trading vehicle to play the oversold bounces. As a refresher–the weekly S&P500 chart study of peaks and troughs illustrates flat or higher highs, flat or higher lows – and the market remains over the 200 day MA. Thus, we remain in a bull market.

On the chart above, you will note that gold is flirting with the dominant negative trendline that has been in place since 2011. I checked momentum studies on the chart (not show—I wanted you to focus mainly on the current trend) – and they are approaching or at overbought levels. So there is a decent chance that gold might find a reason to reverse itself at the trendline fairly soon.

All in, I’m convinced that the moves on the VIX and gold might suggest some neartermed volatility on the markets, but I don’t have enough evidence to suggest the onslaught of a full blown bear market at this point.