Home / REIT’s – a trade worth considering?

REIT’s – a trade worth considering?

I’ve had two separate requests for an analysis of the REIT sector in Canada. So I thought I’d cover it this week.

The weekly chart of the iShares REIT sector ETF below shows us a few things. First, the sector has come into some fairly strong support in and around $14.75/share. Another significant level of support lies at around $14.25. So there is a good chance that much of the current drawdown on the sector has been realized – and if not, the measured downside to these dominant support levels is reasonable.

We should also notice that the downtrend, which has been in place since early 2015 – is not officially over. Lower peaks prevail.  Signs of basing are there, as seen by the double-bounce off of the aforementioned $14.75 support level, and by the (red) $15.50 /sh horizontal near-termed resistance point. The ETF remains below its key 200 day (40 week) MA and is – as is typical in a basing stock – meandering around its 10 week MA.

Below is a seasonal chart for the S&P/TSX real estate index, courtesy of www.equityclock.com. It appears to me that the seasonal entry point would be right about now for this sector. On the weekly chart above, I’ve marked with blue arrows the end of  November low point that appears to reflect this seasonal entry point from Equity Clock’s analysis. It does look like, at least since 2011, this trade has worked. 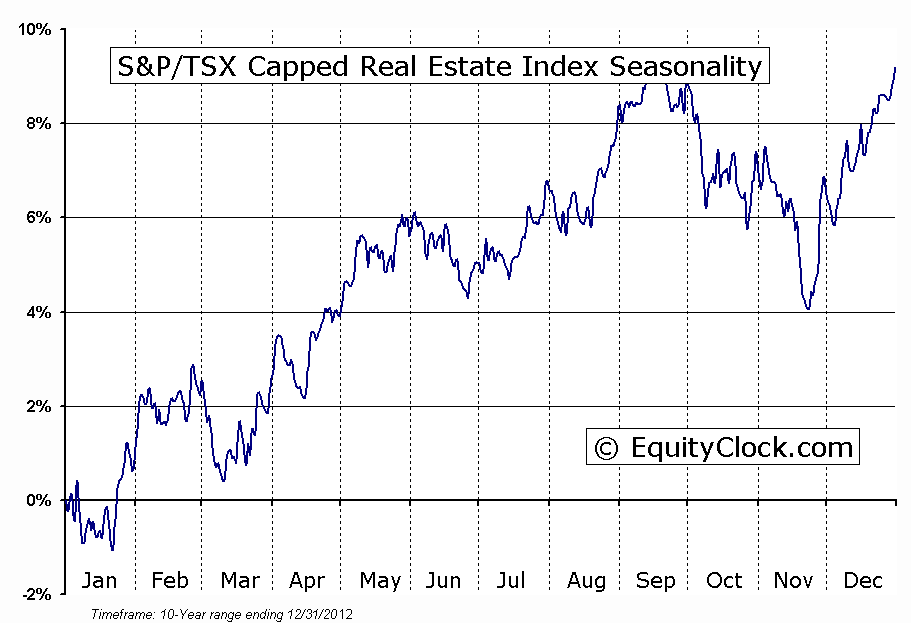 How I would trade it

My strategy – should I wish to enter XRE – would be to buy after a 3-day break through $15.50. I would look to sell in the $16.75 area. You could collect the 5.5% yield on the ETF while you wait for that upside potential to materialize. Downside is likely contained to $14.75—although a worst case scenario might be $14.25.

I don’t have a problem with the upside/downside and probable positive outcome of such a trade, but I probably won’t bother with it, given my models desire for higher profit potential.

ValueTrend results are in for November!

We’re happy to report that the performance numbers are in for November. Click here to see our managed equity platform’s numbers.