I have posted similar charts to today’s just a few months ago, but I thought it was time for a very quick refresher on the market patterns of today, vs. the last two significant bear markets (2000 – 2002 & 2007 – 2009).  Below are SPX weekly candlestick charts of those two periods, followed by a chart of the current bear market that began early this year. History does not precisely repeat old price pattern movements, but it can often reflect similar patterns on the stock market. Perhaps we can learn a few things by comparing these 3 time periods.

I’ve posted this 2001 bear market chart in the past.  Note the two bear market rallies (circled in red) followed by the final washout. That washout took us down from around 1150 – below 800. That was about 30% pain from the rally point. Peak – trough of the entire bear ended up being darned near a halving of the market. The bottom was signified by a hammer candle in July 2002, but (not seen on this chart) the market moved sideways for almost another year between 2002-May 2003. That was roughly in the 800-900 range. The SPX finally moved over its 40 week/ 200 day SMA in May of 2003. The new bull market had begun.

As an aside, I was a far less disciplined trader tin those days, and took it on the chin by capturing a good chunk of the downside. I describe this in my latest book, Smart Money/ Dumb Money. I learned valuable lessons during this crash, and those lessons afforded me to manage the 2008 bear far better. I’ll discuss that below….

Just as in 2001, note the two bear market rallies on the chart below (circled in red) followed by the final washout. The 2008 bear ended with an engulfing candlestick pattern.  The official bear market was verified as over as the H&H bottom formation neckline breaking in May 2009, along with a move above the 40 week/ 200 day SMA. Whether a H&S consolidation in 2009, or the rectangular consolidation seen in 2002 – both era’s saw a final big washout with a prolonged consolidation period.  The final washout in 2008 was over 40%.

ValueTrend began buying AFTER the breakout signal in May 2009, having held about 35% cash in our Equity Model for much of the bear market. This afforded us to break-even by March 2010.  The SPX (and many investors) didn’t break-even for 3 more years. We are following the same strategy in the current market. More on that below.

I discuss how to identify those patterns in my latest book, and in my Online Technical Analysis Course. If you have not taken the course, I recommend you do so. It contains my entire money management and trading system, designed to be a blueprint for anyone serious about managing their portfolio correctly.

You can see that the bear market staged two rallies with similar consistencies as in 2001 and 2008. The difference this time appears to be an attempt by the SPX to challenge the peak of the last bear market rally. Note that the 4170 resistance that I have been speaking of lately, is  being tested on the chart below.  The last two bear markets did NOT see a rally that tested the prior rally peak. If 4170 holds over the next few days, the market may have begun its bottoming phase. Perhaps the June washout, as small as it was on a relative (to other bear markets) basis, is all we will get.

Possible chart discrepancies, beyond the recent test of the last high vs. prior bear markets:

Seasonal patterns – if they play out – can spell problems for markets in late August and September. Sometimes it can get dicey after the Labor Day weekend at the end of this month. However, trend trumps all. If the SPX remains over 4170 into the next number of days, my discipline will force me to begin legging in with our 32% cash. However, we remain pretty cautious about things, and would step in with small amounts a little at a time over a number of weeks. Again – this assumes the SPX remains over the 4170 level. Craig and I discussed our playbook this morning, and agreed that, if we are forced to begin stepping in, we will do it slowly, and reverse our stance (cash out again) upon any sign of weakness. This is one of those times where its better to fight the FOMO (Fear of Missing Out) emotion, and follow your disciplined approach (again – as taught in my Online Course).

After 2 years of COVID lockdowns – I am happy to announce that I will be doing a live speaking engarement for the MoneyShow on Saturday September the 17th. I’d love to get to meet some of my readers in person, and answer any questions you may have. I will, of course, be providing a view of the markets during my talk. But the exciting thing about this talk is that it is a re-do of a seminar I gave for my CSTA colleagues covering investor sentiment signals. I promise you will walk out of my talk with new insights on contrarian investing.

Market it on your calendar! Click the picture below for details on my appearance, and to register: 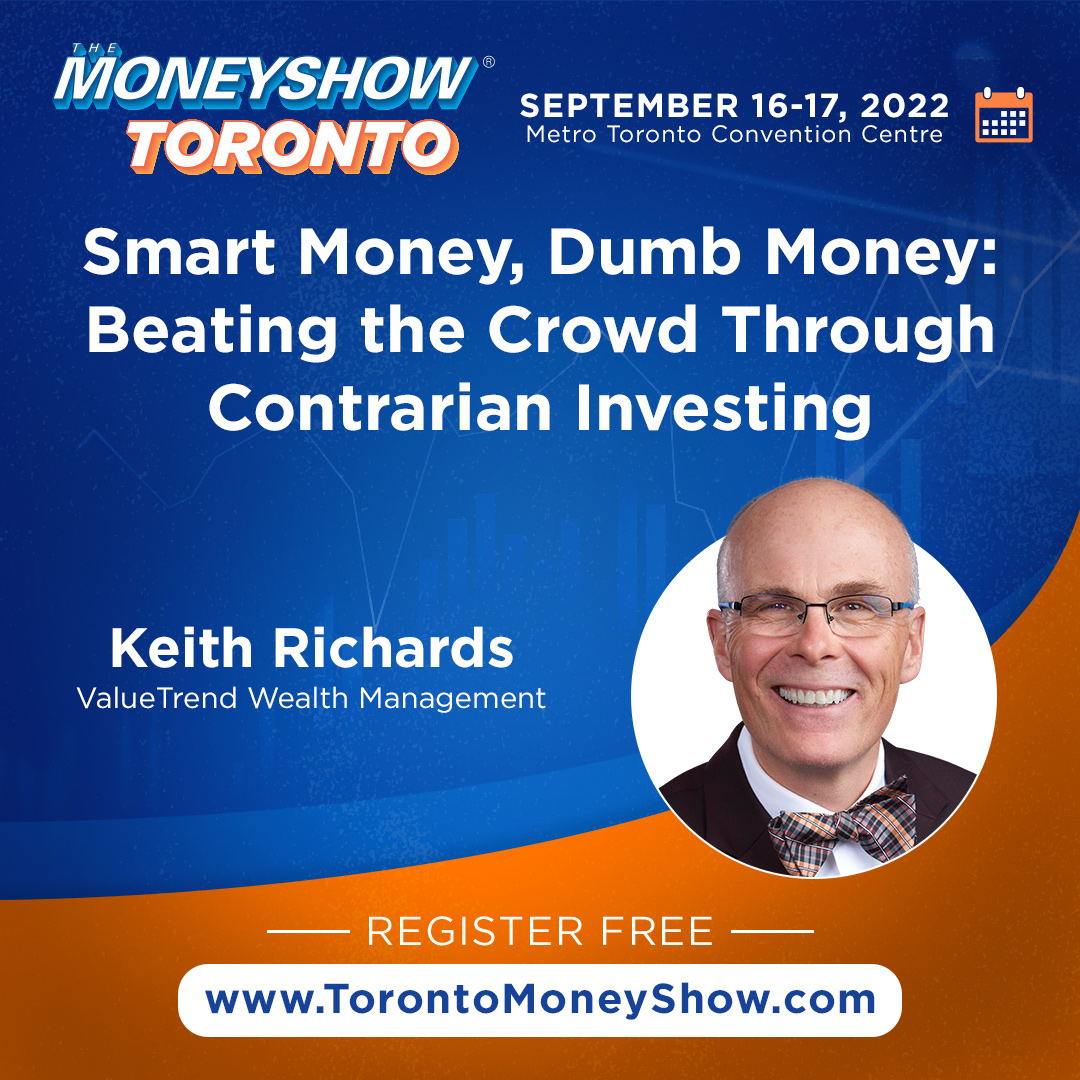