Bond market bull not necessarily over

A reader recently posted a question whether I agree with a BOA research report suggesting the bond market bull is over. To my eyes, the trendline is not officially broken on the 30-year chart (similar to the 20 year chart, etc). While I noted in my reply that I wont dispute the claim by BOA, the long bond is toying with its December 2019 support point around 154. Officially, it would need to break the trendline and that support level for the bull market for bonds to end.

Fundamentally, there may be a case for that to happen, given the macro view for greater inflation in the coming year. That’s why I won’t argue with the BOA outlook for bonds. But, as Yogi Berra once said, “It ain’t over ’til the fat lady sings”. As such, we should assume the trend remains in place until proven otherwise. A substantial break below 154 lasting a month or longer might imply such a break. That hasn’t happened yet.

NASDAQ still has room to correct

Despite a small correction recently, the NAZ is still overbought. Its down to about 13% over its 40 week (200 day) moving average, which is encouraging. But look at the parabolic angle of ascent off of that trendline. I speak of this in my new book on contrarian investing (due for publication in about 2 months). That is, we need to pay attention to parabolic moves off of long term trendlines just as much as we should pay attention to the relationship of price to the 200 day SMA.

My take: some of the neartermed excess was recently washed out of the NASDAQ. That might imply a pause before further selling begins. Technology stocks, which are a major component of the NASDAQ will be facing; 1) rising interest & inflation risk, 2) global tax raises, 3) anti-trust risk and 4) populist, union-driven / “Bernie Madoff” risk. As Larry McDonald of BearTraps recently wrote: “The Four Horsemen have arrived to seal the fate of big tech.”

Does oil have more upside?

I’ve seen quite a few comments posted regarding my opinion on oil –  is it time to sell? I noted to each of the posters that oil was overbought and due for a correction. I guess I was right, given WTI oils pullback last week. This occurred right at its long termed technical resistance near $65. I noted on my reply that I was not selling, given that I expected a relatively untradeable pullback, and I anticipate more long termed upside.

My argument remains that oil will potentially hit as high as $85 in the coming year. The chart below is a wee bit busy, but I’ll walk you through it.

The first thing to note is that Accumulation/Distribution began rising after the 2016 lows on crude. This indicates that money has been steadily moving back into oil since that inflection began.

The 2016 lows led into a series of erratic moves, but the low held. Until 2020, that is – which is when we saw the negative price on the futures contract in April. MACD lined up with its 2015 low point – signaling an oversold market. Its probably important to note that this event was an historic event unlikely to be repeated anytime soon.

The recent peak, which tested the $65 resistance point, illustrated an overbought MACD (along with stochastics) signal. That MACD level coincides with the 2011 MACD peak, which did lead into a significant, but not devastating corrective action. The real butt-breaker for oil was signaled during the 2008 highs – when MACD reached a significantly overbought level. We are not at that level today.

Meanwhile, the fundamentals for energy – which I have noted numerous times in this blog remain. They are (in a nutshell):

With all of this in mind, my view remains for a neartermed pullback potential based on overbought momentum coinciding with the $65 technical resistance. I’m thinking a move no lower than $50, although this would likely be the worst case. Assuming all of the above fundamental factors remain in place, this pullback won’t last. Ultimately, price could eventually breakout – leading into $70 as minor resistance, then an $85 upside target barrel of oil. 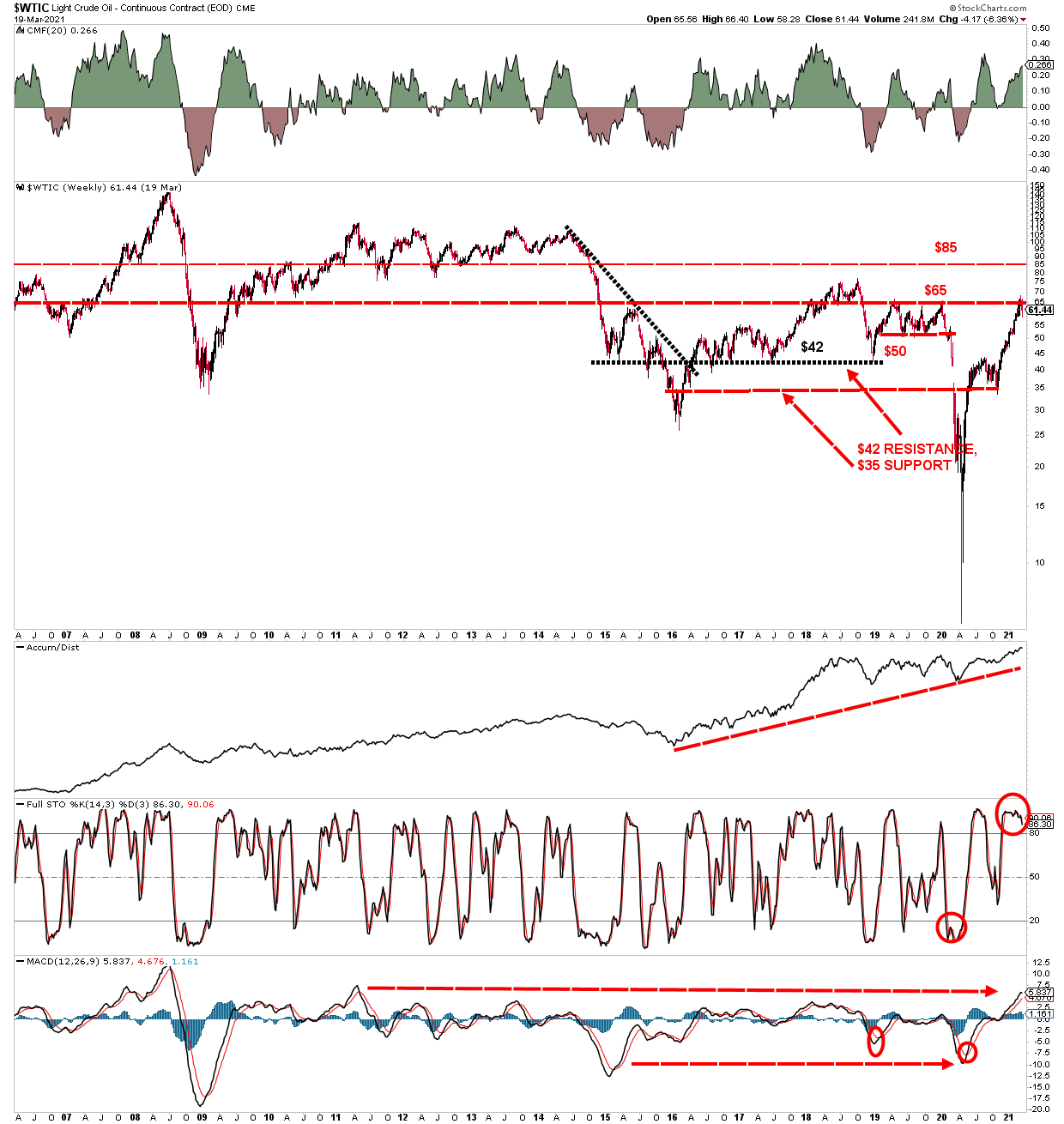