No topic today. Just a bunch of interesting charts I’ve been privy to recently.

SPX price vs. SPX profit margins – chart below: How profitable have the companies comprising the S&P 500  been vs the relative performance of their stocks? History shows us that the decline in profit margins tends to drag the stock market down, followed by dragging the market back up as margins improve. Seems to be a disconnect right now. 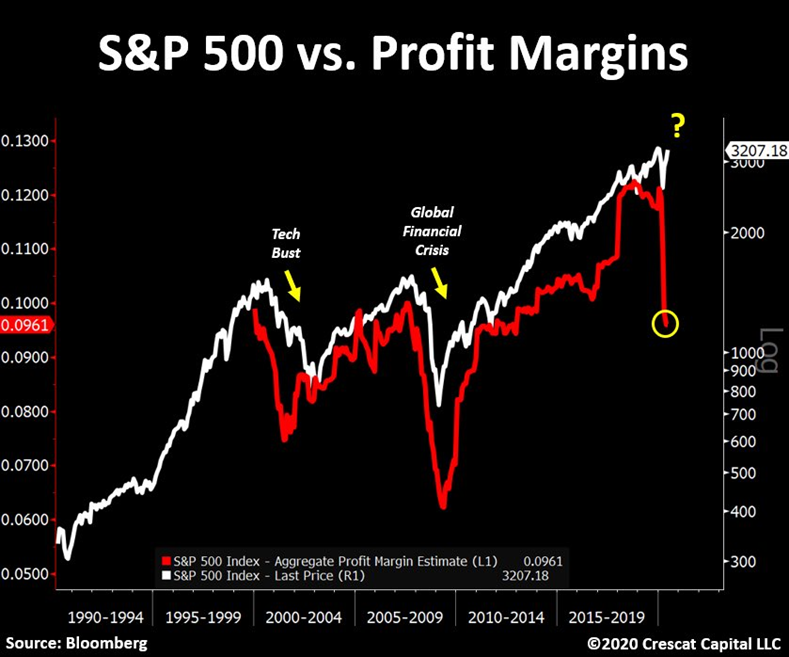 Another example – chart below: After-tax profits tend to lead the stock market. Note the spread in 2000 between after-tax profits on SPX companies and SPX level. This was corrected, but only after profits had been relatively  flat between 1998 to 2000 while markets soared.  Obama’s era saw falling after-tax corporate profits in his final year (spend n tax liberal policy). This lead into a market correction. After Trump was elected in 2016 (for 2017), his promised and delivered corporate tax relief begat a stock market rally. The problem was, the rally became parabolic. Meanwhile, the Fed kept cutting (why?!?!?. ). Is this another 2000 stock crash setup? 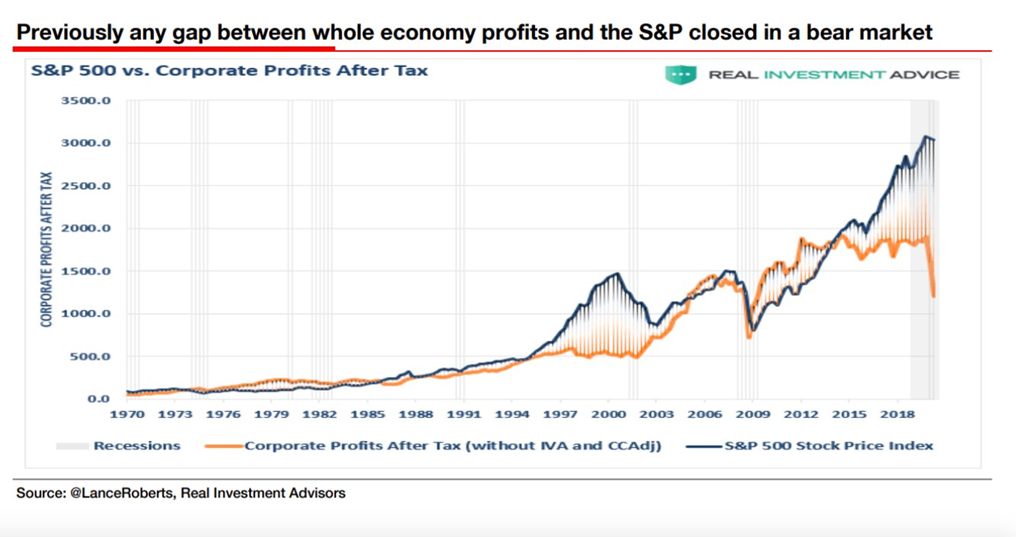 If the Democrats take the Senate

The chart below by Predict it (courtesy Beartraps.com) is supposed to be a better predictor than standard polls. The Democrats were trading near 30% on predict.org at the beginning of March with Republicans at 70%. The chart shows, it’s 50/50 – actually, the very latest work by Predict it shows an edge by the Democrats. If they take the Senate, higher taxes (namely on the 1% and potentially big-tech companies) are likely paying for some of this MMT-like spending for the COVID crises. If Dems win the Senate, Larry McDonald feels there will be some form of a wealth tax / windfall tax / un-do of the Trump tax cut. The chart above suggests continued after tax \profitability shrinking would be another negative in this very, very overheated market…. 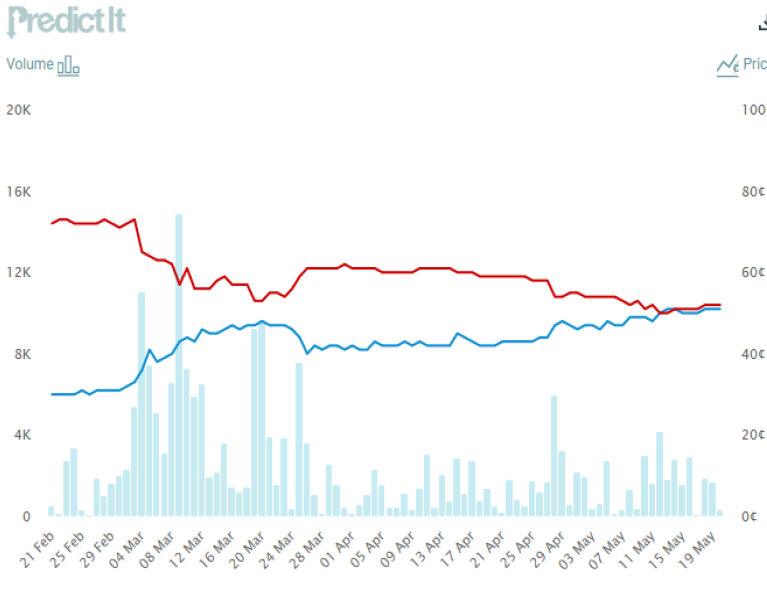 I’ve been asked a few times to give my two cents worth on the loonie (ha-ha!). Type loonie in the search part of this blog and you’ll see a fair amount of my research on the subject. An over leveraged consumer, a tax & spend government with no clue of what austerity* means, and a reliance on already pressured energy prices within an unfriendly government policy continues to pressure the loonie. I have been blogging accurately about the demise of the loonie for a decade.

So I’ll just do a quick wrap today. Chart below.

Note the Big Red Line that has been marking the loonies downtrend since 2011. It broke out in 2019, but failed at $0.77. Looks like its trying to break Big red again. Will it last? Perhaps…I’ll give it a shot at hitting 0.77 or so in the near term. But the trend is going to be hard to break. As I noted to one reader:

The current loonie strength is based on 2 things: oil’s rally (which has resistance in the low $40’s, currently just under $40) and on the USD vs. world currencies weakness. The “risk on” trade is back – which makes the USD less of a fear/safety asset play that it was during the COVID crash. However, if the market pulls back or if the COVID re-emerges–watch the USD rise and the CDW fall…risk-off will re-appear. That’s actually bad for the loonie.

I continue to view the upward moves on the loonie as trading opportunities only. 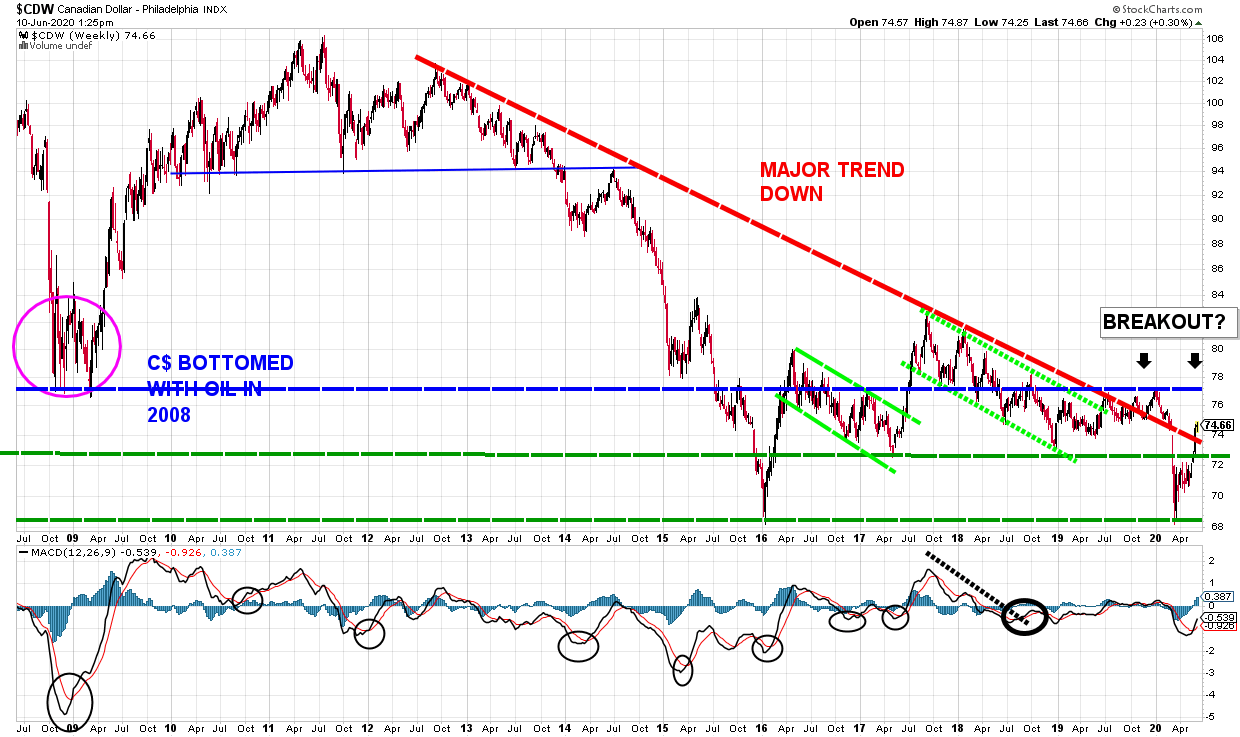