Home / Preferred shares building a base

Preferred shares building a base

Back in April 2015, I wrote a commentary on the outlook for preferred shares. These securities, illustrated via the iShares Preferred share index ETF (CPD-T) went on from that date to put in a lower low. A long time reader of this blog  recently asked me to update my opinion on the sector. BTW—I do appreciate this readers enthusiasm towards the blog—which now sees well over 3000 individual hits per entry. He was a follower back when I had about 1/10th of that following!

Preferred shares were hit hard in Canada as oil prices tumbled from their 2014 highs. Pref’s had largely been issued as “fixed floaters” by the major preferred share issuers at that time, given the outlook for Canada to raise rates. The Canadian economy had done very well to survive and recover after the 2008-9 recession due to conservative fiscal policies, a controlled deficit, growing employment, and investments in the Canadian energy sector. Noting this strength in the economy, Mark Carney, then heading the BOC, noted that Canada would begin raising rates in 2015 – stating that he expected at least 0.50% in rate hikes over that year. 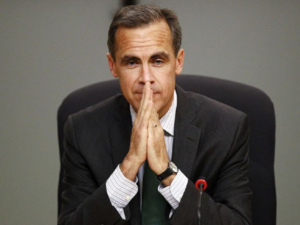 Given that it was a “sure thing” rates would rise –the public demanded preferred shares that did not lock them in to what was perceived to be the low point in interest rates. Fixed/floater preferred’ s and other rate-reset types were issued, allowing holders to earn a fair dividend at the time of buying, with the knowledge that the dividend yield on their securities would be re-adjusted (presumably higher) when rates went back up. Of course, if rates fell – they would re-adjust lower at reset time  but that was a very low probability.  Canada’s strong balance sheet, growing economy and the strength in energy pricing merited getting back to the pre-recession rate levels.

When energy prices peaked in the 3rd quarter of 2014, nobody could have predicted the story would change in just a few months. But energy did fall – and hard.  So did the economy –see the chart by NBF below. Instead of raising rates, the BOC was forced to DROP rates twice in the early part of 2015. Talk about a change in outlook! This in turn made the reset feature of the newly popular rate-reset-preferred shares unpopular. Who wants to own an income paying security knowing your rate will be reset to a lower rate? The market for preferred shares fell hard as the pending reset dates (2015 and onward) loomed. 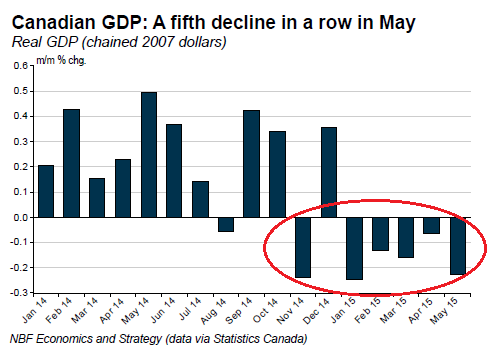 Is now the time to be picking up preferred shares? This is a difficult question to answer. We can look at the chart, below, and see a potential case for a base building on CPD. My rules suggest that a base is not broken until the last prominent high (or series of highs at the same price level) is broken. Despite the trend-line break and MA crossover illustrated on the chart, you can see my red horizontal line indicating a wall of overhead resistance that needs to be cracked before confirming a true “Phase 1” base breakout.

From a fundamental point of view, I would also suggest that greater clarity regarding the BOC’s rate outlook be observed before buying into this sector. It will likely be some forward looking statements by BOC Governor Stephen Poloz regarding higher rates that will nail a breakout on this chart. Until that point, I would probably wait and watch this sector for the time being.  While we at ValueTrend do have exposure to the sector via ETF’s—that exposure is quite minor– and we do not expect to be increasing it until the above conditions are met.