Home / Positioning within an overbought market

Positioning within an overbought market

Upside target for the S&P500 is at the old highs of 2135. That’s about 3% upside from here.  I am not providing a prediction here, but that is the obvious next target, should markets keep moving up. The S&P 500 hit and fell from that 2100-ish ceiling numerous times over more than a year. Based on that duration, it’s going to take a significant event to drive the markets up through old highs. But what could drive markets to accomplish new highs, and when could it happen?

Presidential cycles suggest that the second half of an election year is bullish. This makes sense, given the uncertainty that is lifted after that event. Further, whenever a new President or (in Canada’s case) Prime Minister is elected, markets can go through a bit of a “Honeymoon” phase. Plus, seasonality will come back into play in the fall. So that would be my guess as to when markets might start their next charge.

In the near term, markets are overbought. While the weekly chart shows encouraging RSI and MACD (mid to longer termed momentum), the shorter signals coming from stochastics are suggesting things have gone too far. And of course, we are nearing the end of the “best 6 months” period. 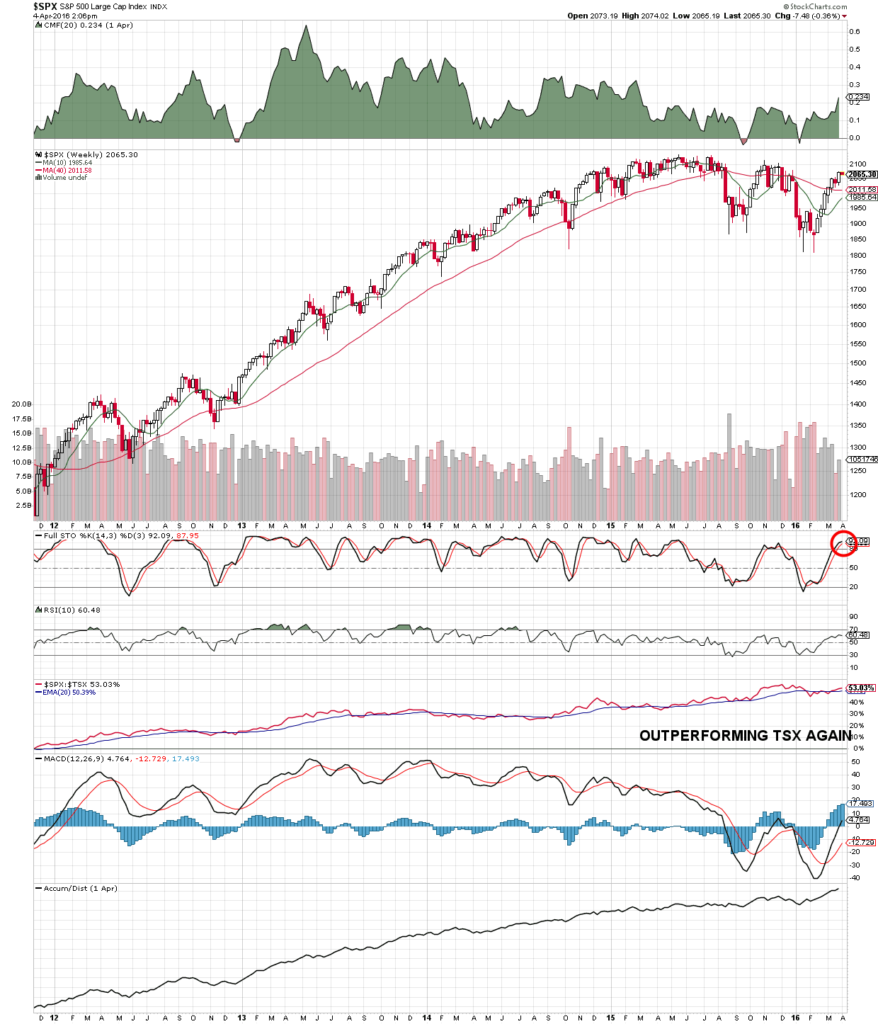 Drilling down to the daily chart, we can see that momentum oscillators are quite overbought across the board. You’ll also notice that on both the weekly and daily charts, the s&P500 is starting to outperform the TSX again—largely due to the retreat by oil – and other commodities.  If markets got ugly, the S&P could easily see the lows of last summer and this January—both around the high 1800’s. That’s an 8% downside. Again, not a prediction, but a potential based on an overbought condition, the presidential cycle tendency for chop in the final part of the first half of the year, and seasonal patterns coming to a close at the end of this month. And yes, markets could go lower than 1880, but I am using the most likely downside potential (not a prediction). 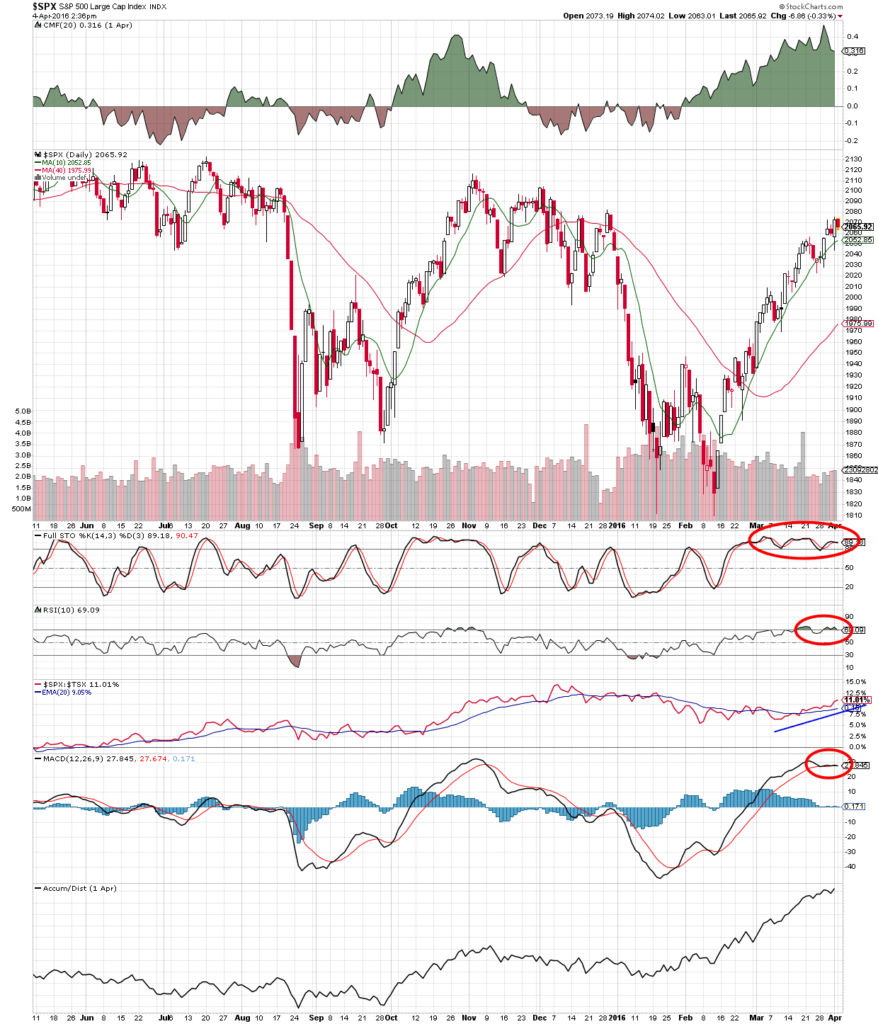 I’m beginning to leg into a VIX –related security, as noted in my last blog. Yes, (the VIX) can go lower.

Thus , I am only putting on a part position at this time. If the VIX got down to 11, as noted on my blog, I will buy enough to overweight the position. That level represents a very good risk/reward premium for the VIX. If it  drops a bit less, say into 12, I’ll buy enough to make a full position. If it heads up too quickly, I’ll just hold what I have.

The VIX near termed chart can be seen below. As you will note, 12-15 have been near termed support levels for the VIX. It’s around 14 today. My downside for buying today if it heads to 12 represents a 13% loss. Worst case is for the VIX to hit 10, which would be a 40% drop. My upside for the VIX, if it goes back to its recent trading highs of 18 is 28% (to 18) and as high as doubling my money (100%) if it goes to 28. Keep in mind, as one of our readers noted, contango on futures and ETF’s can mess with this equation a bit.

Also note that I am keeping half of my “normal” position powder dry on this trade. That is, I can buy another half at a lower cost should conditions described above play out.

But just to use my current purchase to compare it to playing the S&P 500: Worst case downside is 40% downside, best case 100% upside. That’s more than a double reward/risk ratio.

Compared to the double risk/reward ratio for the S&P500 (3% upside, 8% downside), its looking like a step-in strategy to the VIX may be prudent, despite the bigger numbers to the downside that are involved with the VIX.