Just a short blog today given a hectic schedule this week.

I wanted to revisit a chart that I keep on my watch list. Many of you will have seen this chart before—which I refer to as my “short termed timing” chart. It’s got all of 3 of my favorite neartermed indicators on a daily candle chart. I look for coinciding hooks on RSI, Stochastics and a Bollinger Band from their respective extreme levels in order to detect neartermed upside or downside potential. Right now the three do not line up in any extremes, so I have nothing to report to you as far as a neartermed buy/sell signal. The last short termed signal we got was a week before Christmas, which did result in a minor selloff (kiboshing the “Santa Rally”). I circled the three overbought zones, including the BB upper band touch and falter, on the chart. 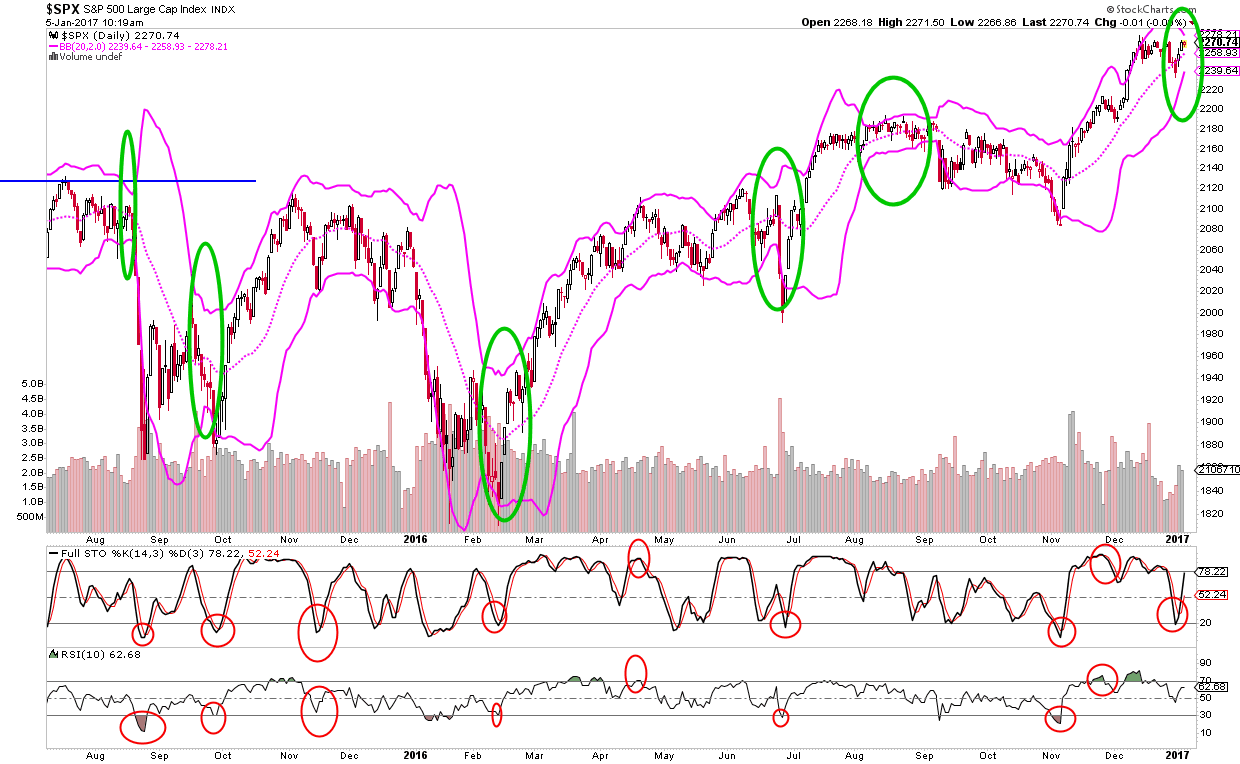 Despite no new buy or sell signals on the short termed system (although the momentum lines are getting closer to a sell signal…)- there is another situation appearing on the chart I thought you’d like to be aware of. Every once in a while you will see a “Bollinger Band squeeze”. This is when the two respective volatility bands (Bollinger Bands) move from a fairly wide position into a narrow position. I have circled the instances when such a “squeeze” –or “pinch” — occurred on this chart with thick green circles. You will note that a BB squeeze can lead the market into a more significant change in direction (albeit temporary) – into either a rally or selloff. A BB squeeze simply means that volatility has changed—which implies market change to some degree. The recent squeeze is indicating some change may be coming. Given the seasonal and electoral patterns discussed here in the past, I wouldn’t be surprised if we do see a move lower later this month.

As a contrarian, I rely at least to some extent on sentiment data. As the Templeton once said: “To buy when others are despondently selling and to sell when others are avidly buying requires the END_OF_DOCUMENT_TOKEN_TO_BE_REPLACED

We're into the home stretch, baby! Today's questions are being bundled together, given that they both focused on commodities. Before going to the charts, let me again thank all question-posters for END_OF_DOCUMENT_TOKEN_TO_BE_REPLACED

We're back with part 2 of the Ask Me Anything Answers from last weeks blog. Lets get right to it. Divergences Tesjinder asks if I have a preference for daily vs weekly charts when looking at END_OF_DOCUMENT_TOKEN_TO_BE_REPLACED