Some of you know that I am an amateur competitive masters-class (old guy) cyclist. My coach, Ed Veal  asked me on the first day I started dealing with him a couple of questions. 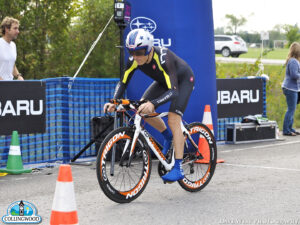 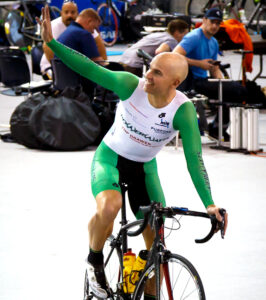 Question One—Was I willing to stick with a tough, disciplined program?

Question Two—Do I consider myself a patient person?

The answer I gave to him was YES to both questions. You see, I often have to stand against the crowd and stick to my investment  program – even when it feels tough. The patience and discipline  learned from a a long history of technically trading the markets was ideally suited to following a physical discipline.

Let’s talk about disciplined trading (not unlike disciplined training!) for a moment. It’s always tough to watch your neighbour make money during frothy silly market melt-ups while you stay the course and hold cash. It’s been tough to hold cash and hedge during the past couple of months as the market moved up to its former highs. But my disciplined approach showed me that the probability was greater for a selloff. Markets just needed a reason.

I liken the market to that of a balloon. The Brexit vote is being blamed for the current market selloff. Nope—the balloon was already too stretched. Quantitative factors told me this 4 months ago. I hedged our stock portfolio and held cash – here’s the blog noting this bearish stance from April 7th

The market – to carry on the balloon analogy- needed a sharp object to pop the balloon. The media and investors always blame the sharp object—in this case, Brexit. But the market was stretched—and I knew it was according to proven indicators (read the blog noted above). The sharp object may not be sharp enough to pop the balloon, unless the balloon is stretched enough. If the market is stretched enough, you get a strong selloff. Don’t blame the sharp object—it was just an event that tipped the scales to what was an inevitable outcome. Brexit, Greece, an earthquake, terrorism, Trump.  Something would have caused this selloff. Technical macro indicators (and fundamental ratios) told us this months ago.

Where to from here?

Below is a chart suggesting potential support levels for the S&P500. I’ve noted these on the chart as possible buy points. Note the divergence of momentum indicators leading into the selloff. This was one of MANY things that had me holding cash and hedging. 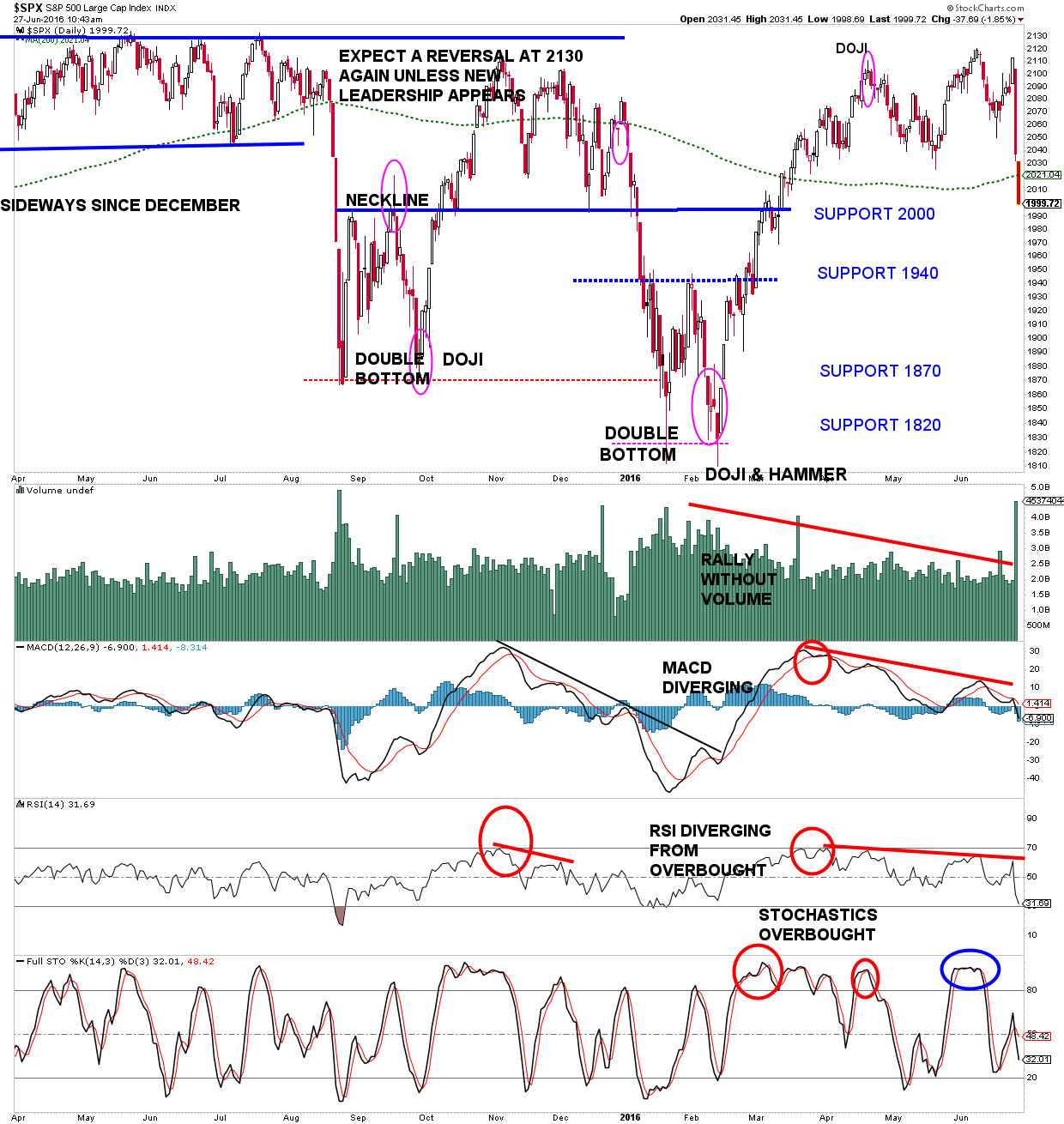 Here is a table of various one-day crises points on the market (S&P IQ) and the number of days for the washout to complete itself. I would remove Lehman’s collapse from this list, which skews the data. Further, Lehman was part of a bigger picture problem during the sub-prime crises in 2008/9. It was not a one-off event like a Tsunami or the Nixon impeachment. Removing Lehman from the table brings into low-single digit bottoms – on average. Brooke Thackray and Cramer (I don’t usually like to quote that guy, but in this case I will) both note its usually 2-3 days for the bottom to appear after a market shock. 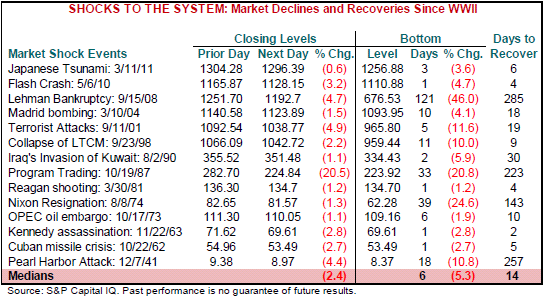 The takeaway—review my chart above for potential support points. Watch for a buying point at or near a support level really, really soon.

Carry on, my fellow trading athletes. You have exercised discipline patience.  You held your cash and hedges alongside me. Now–You have your new mission. Seek, and deploy at least some of that cash. Your coach is proud.