Pardon my use of the “F” word

My apologies to those who take offence at the use of the “F” word. You know what I’m talking about – Fundamental Analysis. But my friend Craig Basinger, Chief Investment Officer at Macquarie (soon to be Richardson GMP) was kind enough to forward an interesting chart to me – and I think it’s worth your time to see it. Craig tells me he cribbed the idea from S&P research. Whatever the case, the chart below shows us various “ghost lines” of where the S&P 500 would be sitting, given various PE ratios . The S&P 500 is currently sitting at about 15 times forward earnings based on bottom-up estimates of operating earnings. The thicker line is the S&P 500, and the thinner coloured lines represent various PE multiples. Looking at a long history, the average PE ratio for the S&P 500 dating back to the mid-1930s is about 16. This implies that the S&P can actually advance by 1-2 times earnings from where it is right now over the coming months. 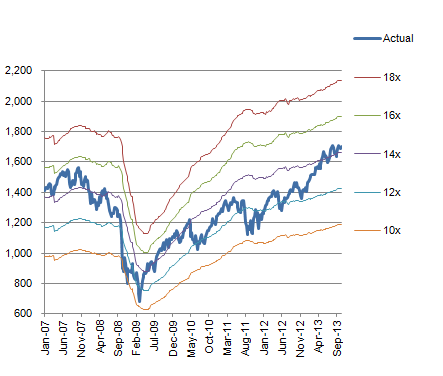 Work by Ross Healy of Strategic Analysis Corp. (www.strategicanalysis.ca) shows a similar potential when looking at book value breakouts. Ross has created “ghost lines” surrounding both stocks and indices for years – only he is using various breakouts of Price/Book Value (P/B) rather than P/E ratios. Note on the S&P chart that P/B is hovering around what Ross calls the “growth rate”—which is effectively 2x P/B. His work shows that markets can and often will drive prices into the 2.5x P/B. This, according to Ross, gives the S&P 500 about 10% in potential upside from here. 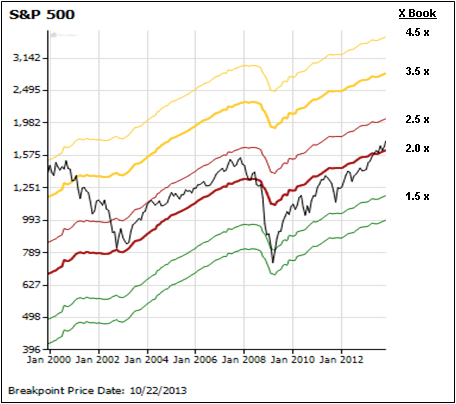 Ross has also kindly provided me with a chart of the TSX vs. its P/B breakout points. The TSX, according to Ross, rarely breaches much over 1.5x P/B. However, the recent chart breakout for the TSX composite gives it some potential to do so, perhaps reaching the S&P500’s level of 2x P/BV. I won’t hold my breath on that one—given my rather sour view of commodities markets going forward. 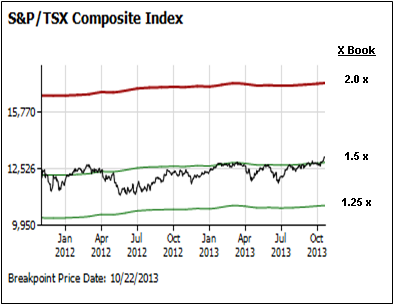 If you come to my MoneyShow presentation on Friday (9:15am),  I’ll be highlighting some stocks to consider for the coming months -given the richer market valuations of late– as well as some to avoid. While this bull market is likely to see a significant correction eventually (perhaps some time later next year), the near termed outlook remains bullish. This is backed up by a reasonable expectation of a bit more multiple expansion, according to Mr. Basinger’s and Mr. Healy’s charts. The ‘F’s” and the “T’s” seem to be agreeing at this time.