Home / Overbought markets to be avoided (for now)

Overbought markets to be avoided (for now)

This blog is not going to appeal to longer termed investors, as I am going to address neartermed trading only. For those who do like to trade within shorter horizons, I am looking at some overbought markets that may deserve a pullback – and potential buy-in point later. I use a simple system to give me neartermed signals as to the relative “overboughtness” or “oversoldness” of a security. I call it the “Neartermed timing system”. Pretty creative name, eh?

Buy and sell signals are made if I see a simultaneous touch of the upper or lower Bollinger band, RSI extreme, and Stochastic extreme. These signals are not long termed signals. But- when we look at them on a daily chart, and combine the signal with an agreement on a weekly chart formation – they might offer a clue to both a neartermed and mid termed potential move. Here are a few overbought markets that are signalling overbought 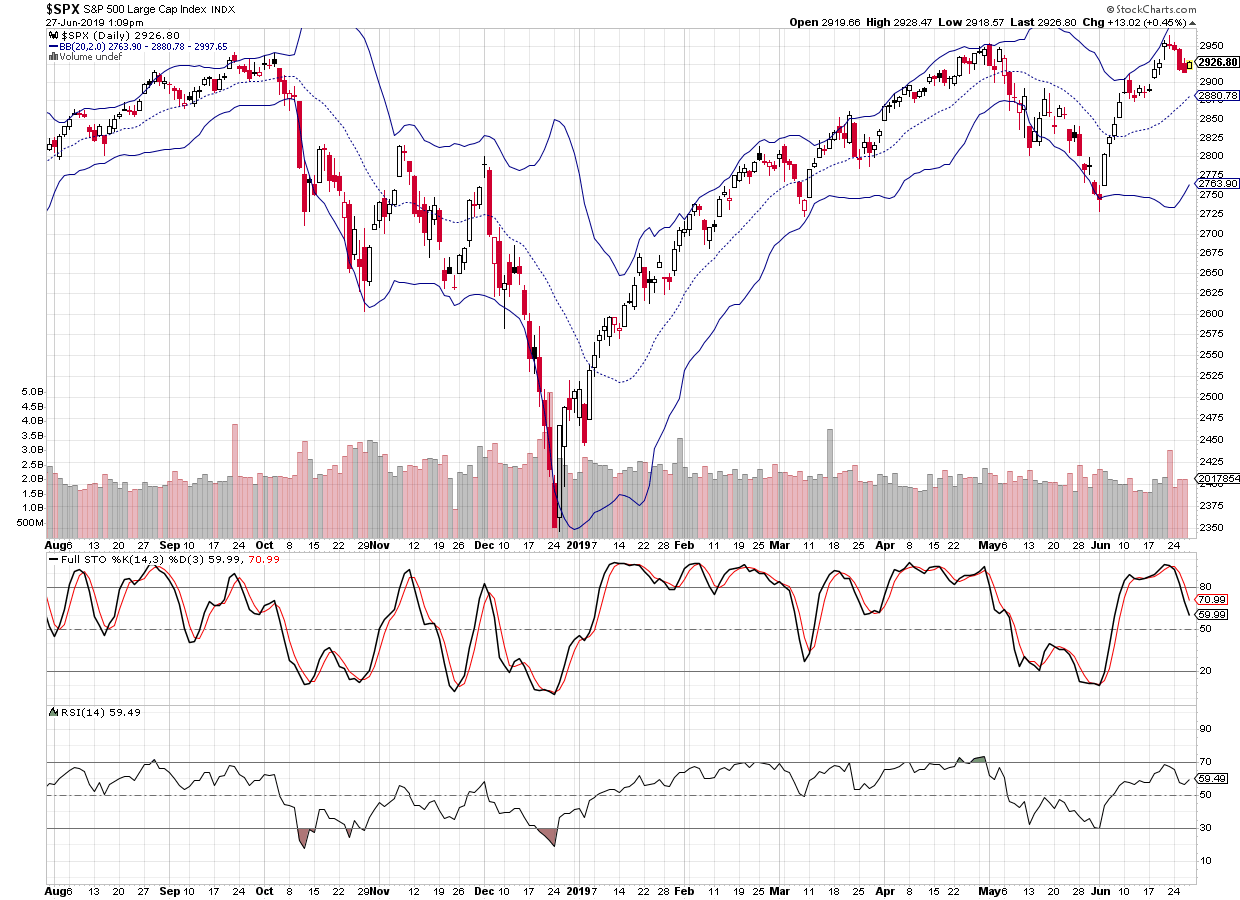 Overbought signals from two of the three indicators (stochastics and BB’s) within the neartermed system, testing and (so far) failing its 18 month resistance point in the mid 2900’s. RSI didn’t get into overbought territory—although its darned close. I’m still calling it a potential sell. 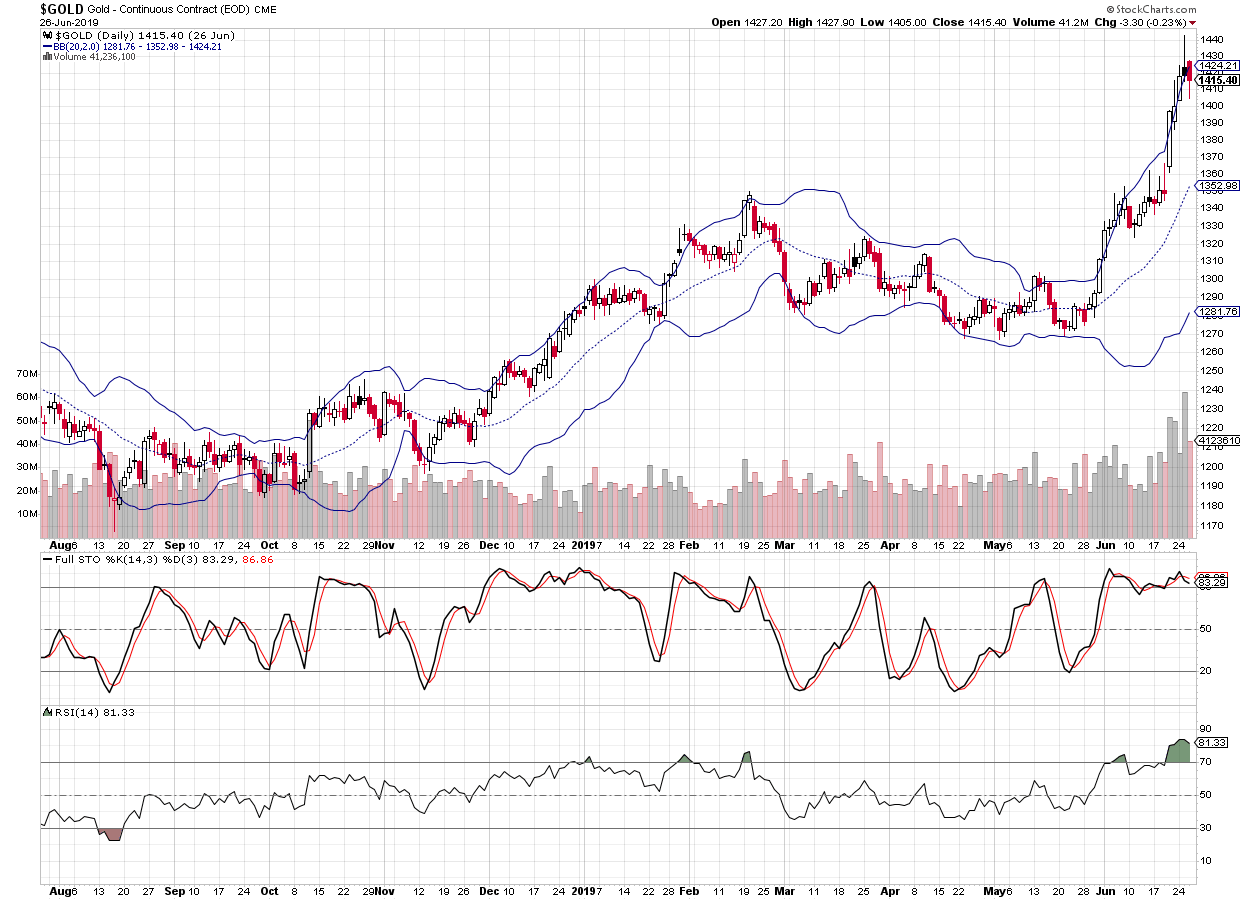 I like the gold chart, as noted on this blog  – but it’s gone parabolic. Way overbought according the three neartermed timing signals. Look for a pullback and re-enter when these signals go back to at least a neutral zone. 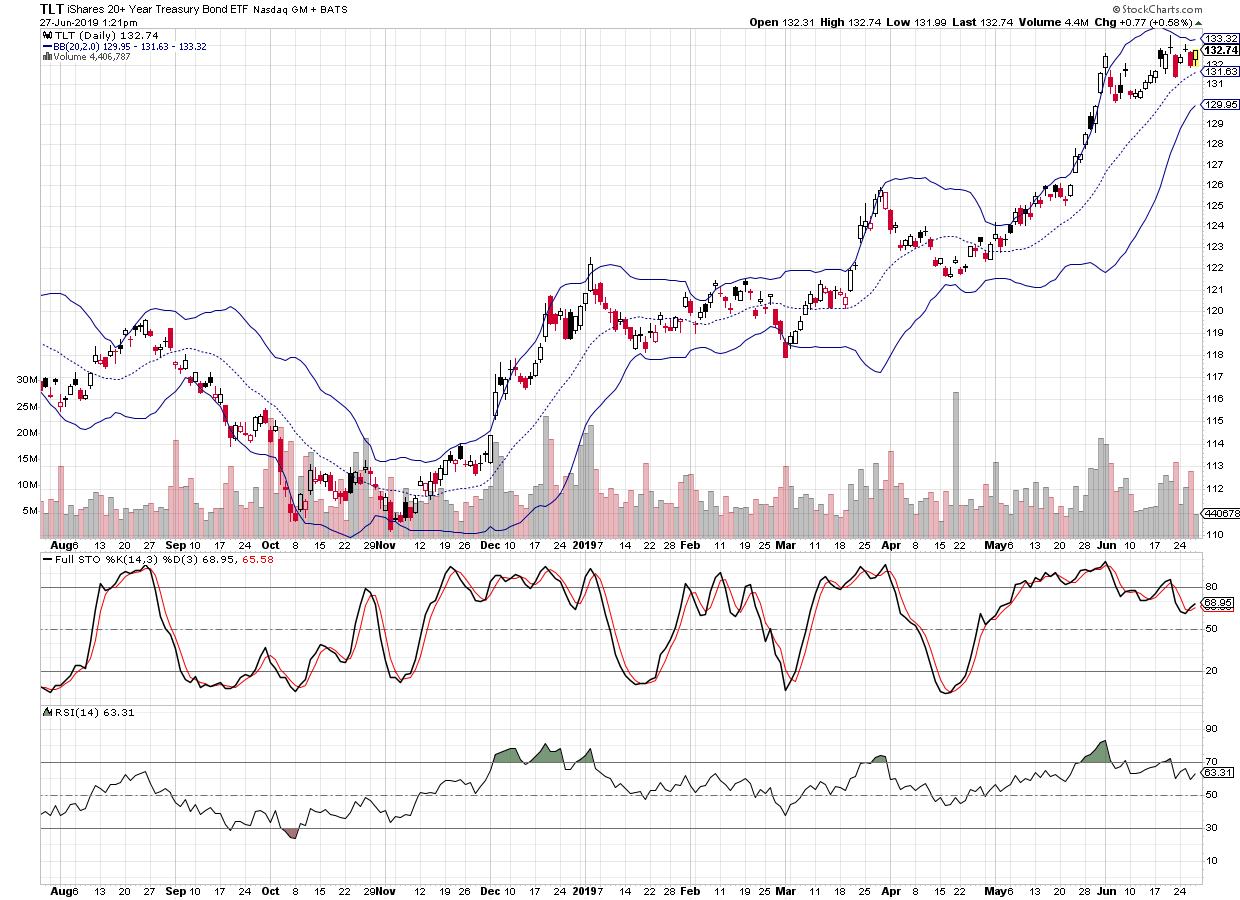 The long bond has been overbought for a few weeks and hasn’t really pulled back enough to rid that excess. Meanwhile, Stochastics and RSI are diverging in trend against the bond price. This implies waning enthusiasm for rising prices. I’m actually slightly short (via an inverse ETF) on this position – and would increase the position if it starts to round over – which I expect it will sooner rather than later. 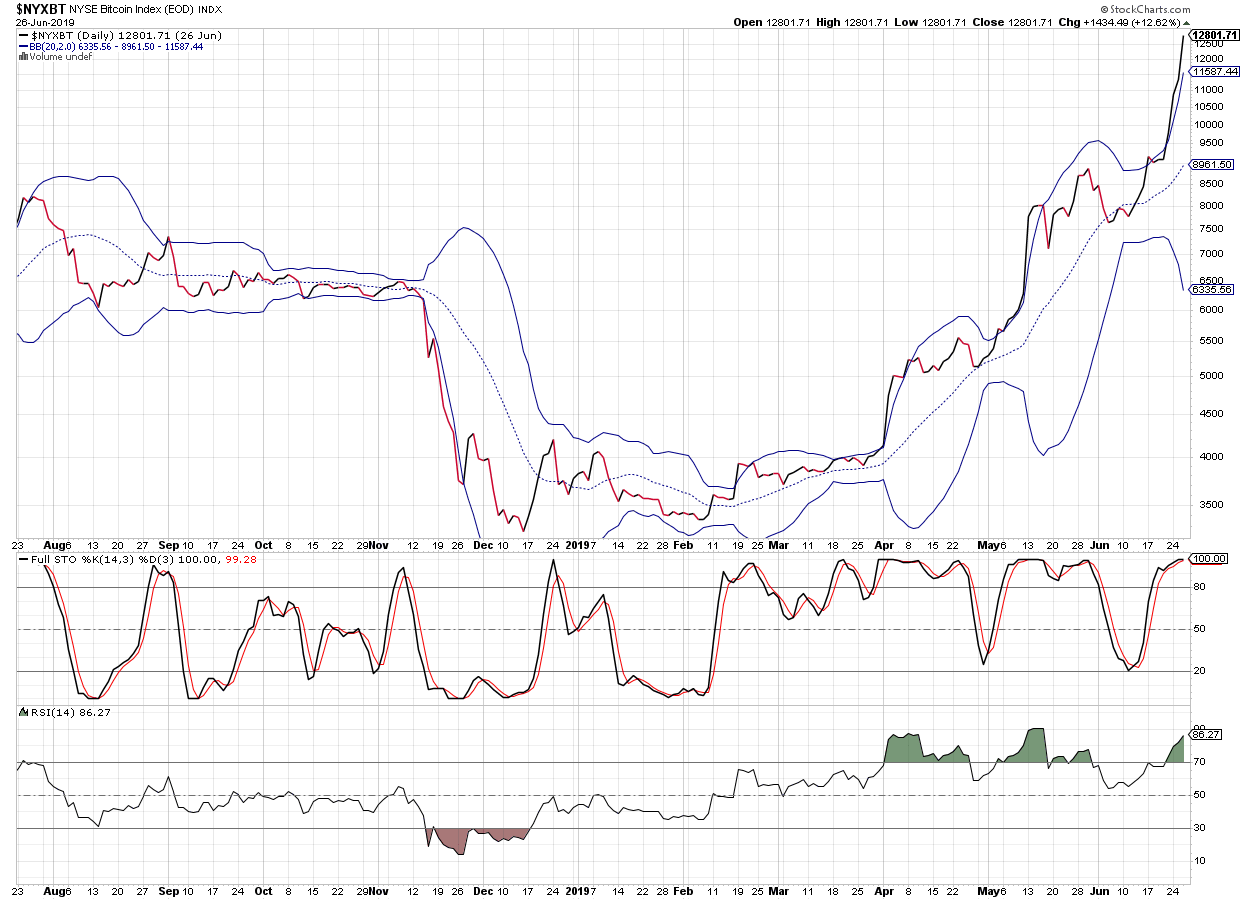 Bitcoin is more than a bit overbought. Way over the neartermed timing systems safe zones. I’d expect a pullback soon. 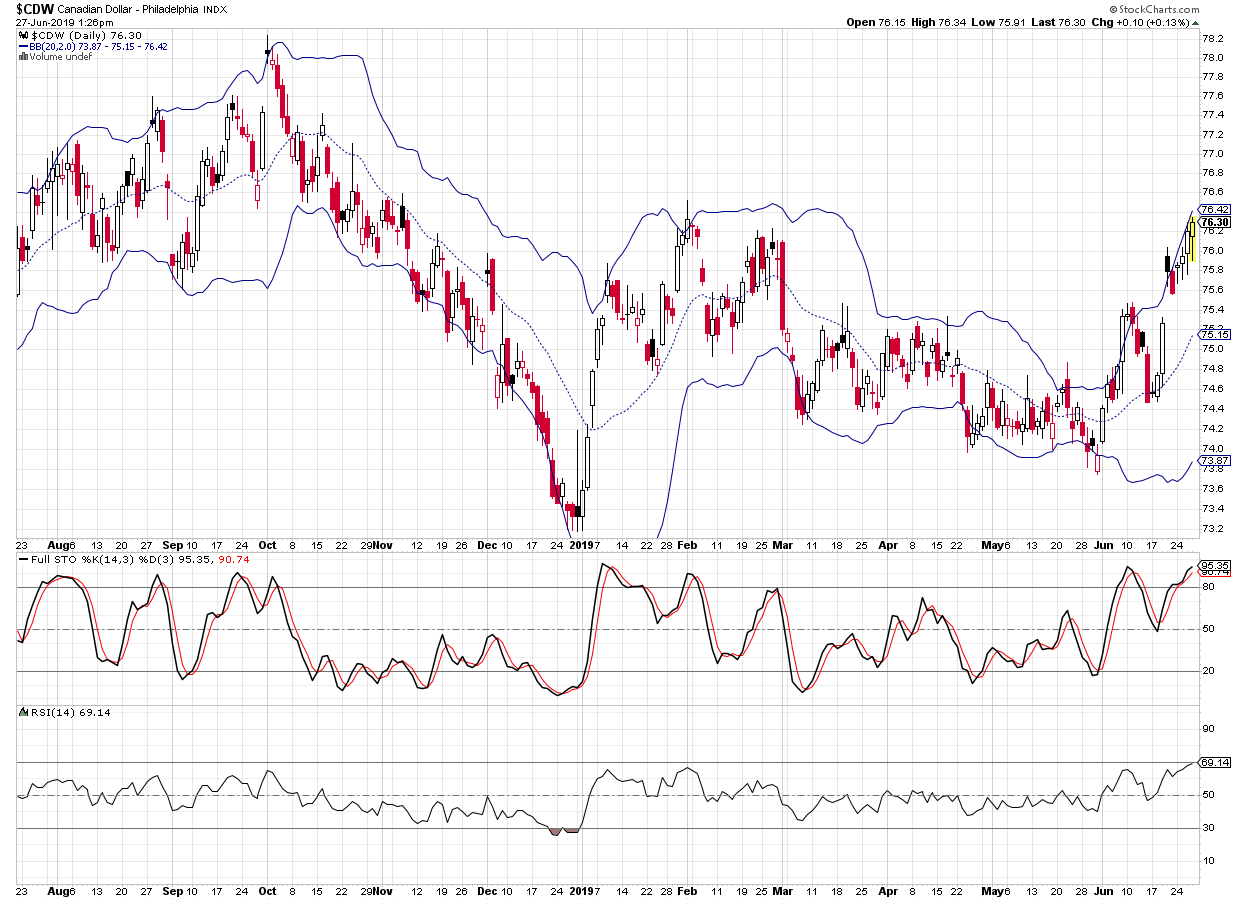 The USD’s fall and a rising barrel of oil have pushed the loonie too high too fast. It needs to pull back – RSI isn’t officially overbought, but its close enough. Stochastics and BB’s are at the top of their ranges.

Apparently my namesake will be at Burls Creek Ontario for a Canada Day Rolling Stones concert this weekend. Rock on, Canada!