I wanted to give you, the good readership,  an outlook and strategy update given the frothy levels on the markets. This time of the year everyone does predictions. I won’t give a one year projection on where markets will be etc. Why bother? Those of us who follow charts are simply going to go with our rules. A sell signal will invoke a sell. Meanwhile, the market will deliver what it delivers.

However, I can pass on some thoughts regarding ValueTrend’s current positioning in these markets, and thoughts as to the state of their overall health.

RSI and other momentum indicators (choose your favorites) are now overbought on daily, weekly and monthly charts. In 2011, 2014 and 2016, the same conditions carried on from mid-year into the end of the year (high RSI – as now).

During these periods there was a correction in December or January. Each time, the correction was finished within a month or so, and markets rose thereafter for a while. In 2016 the winter correction was all we got. Markets have been up without pause since then.

I “predict” the potential of a similar temporary correction to these years early in January or so. That’s why we have 20% cash in the ValueTrend Equity Platform. BTW–When markets correct in the winter they tend to revert back to bullish conditions quickly.
The chart below shows us that you often see a correction beginning in the very last part of December or into January-marked with vertical lines-its happened in most years since the bull began, except 2013. 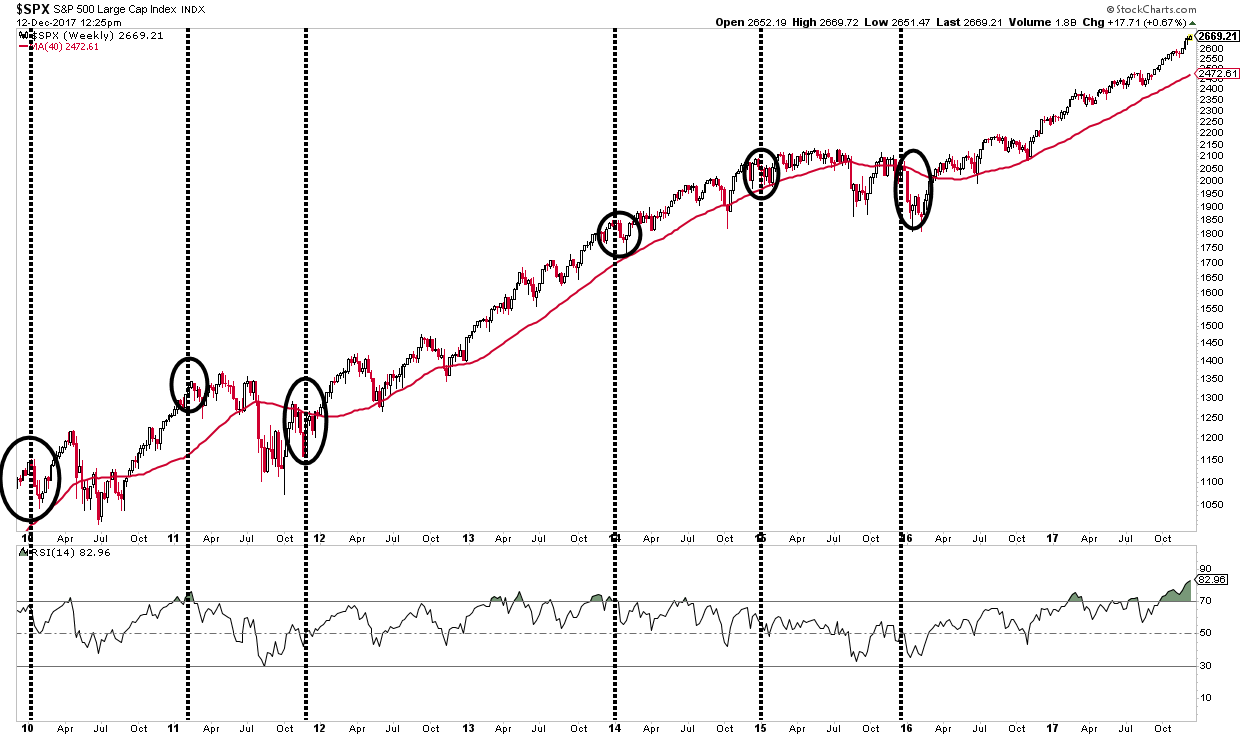 As far as near termed risk, we noted in one of the ValueTrend updates that we send to clients that we view the markets somewhat tepidly:

“We have decided to approach this “buying” season cautiously. We are stepping in slowly and buying stocks – but not the overbought market leaders. We feel there is a strong potential for some rotation sooner or later from the frothy few stocks that have been solely responsible for this rampant market. We are going to hold at least 15% – 20%  cash even after buying stocks in the coming weeks. It is our view that a healthy correction is likely at some point in the near future. We’d like to have cash should that happen.”

Despite the very likely potential of a January correction that might be in the neighbourhood of 10% or so (as happened in 2016) – there are no mid termed indicators of a change in trend. Lets now cover the mid termed outlook:

I prefer to look at the distance of the market (SPX) over the 200 day SMA (simple moving average) for my mid termed overbought/oversold evaluations. I’ve placed the 40 week (200 day) SMA as a red line on the chart above.   The market is above the 200 day SMA. I also pay attention to peaks and troughs on the weekly chart. It is making higher peaks and troughs.

The only practical outlook that Elliott Wave Theory (EWT) can give is a rough picture of where we are in the market cycle. I have no doubt we are in Wave 5 of the cycle. I pay no attention to Fibonacci projections. Nor do I like tea leaves or astral cycles. But the character of Wave 5 is always the same—parabolic, low volatility, irrational exuberance, concentrated leadership. Past examples are the late 1990’s tech bubble and the 2005-2007 subprime, real estate and oil bubble.

Again, note the recent year’s activity on the chart above. The current evidence for Wave 5 since is: the low volatility, the parabolic look to the chart, and the concentrated focus on Fantastic Five superhero stocks (FB, AMZN, MSFT, AAPL, GOOGL). That, and bitcoin. The problem is that this final 5th wave may go for a while. Or not.  It will stop when it wants to.  Not when you or I want it to. So I follow a simple rule: Sell on a violation of the 200 day SMA and a lower trough on the weekly chart  – its even more significant if that break is followed by a rally that does NOT take out the prior high. In other words, all the conditions have been met that an uptrend is likely over. If the market does take out the last high, you go back in, having perhaps lost a bit of upside in the worst case scenario. In this way, you will protect your money from any significant bear market move while staying in the market during most of the uptrend. Read this blog for more info on how to sell properly.

I also recommend you read this blog for more info on Elliott Wave applications.

There is a tendency for this year’s underperformers to outperform in January – while outperformers often slow down or decline. At ValueTrend, we are holding stocks, sectors and markets that are somewhat underappreciated or have pulled back in a trend. Meanwhile, we are looking for opportunities in what we view is a very likely pullback in January. We are holding a bit less than 20% in cash with an eye on buying stocks on a pullback, should one occur. We have minimal exposure to the market leading overdone stocks—and greater exposure to what we feel are rotational candidates—below are the prime examples of sectors we own, or want to own, or want to own more of in a correction:

Select overlooked stocks (e.g. we own Fairfax Financial, and that under loved dog, Cineplex).

I hope this helps in positioning your portfolio for the coming year.

Some of you know that I speak at the Toronto MoneyShow every year. This winter, the MoneyShow has invited me to speak at their Orlando show on February 10th at 6:15pm. Honestly—who would say no to that offer, given our wretched winter weather in Ontario? If you happen to travel to central Florida during the winter, or if you have family/friends who do the snowbird routine—come on over to the show. It’s taking place in the Omni Orlando Resort –  I’ll post further details when the time draws nearer.