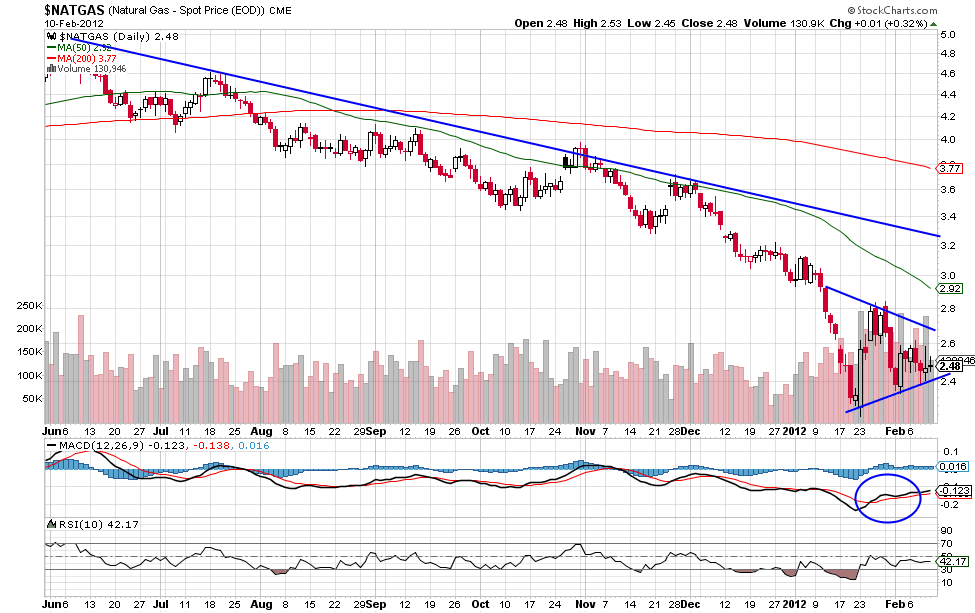 Bargain hunters are always looking for the next turnaround candidate, and I am frequently asked for my views on natural gas for a potential turnaround. Lets see if the charts will give us a clue as to the outlook for this commodity.

The trend for gas is down, as evidenced by the larger trendline I’ve drawn on the chart. Gas is below its 200 day MA and its 50 day MA, and both are sloping down. Spot price is substantially below its 200 day MA, which suggests that the price is a bit oversold. This potentially oversold condition is not backed by traditional momentum indicators, however. RSI and Stochastics are not oversold. MACD did issue a bullish signal in late January via a crossover through its signal line and a upward directional change.  The current consolidation pattern (the small triangle I’ve drawn on the chart) should be watched for a breakout. A potentially bullish breakout would occur above $2.70 per million British Thermal Units whereas a break below $2.40 would signal potential for more downside.

Various fundamental arguments present the case for an upside breakout. Some traders argue that lower prices will result in lower production which will eventually take out the oversupply. There are just as many who would argue for continued low prices, evidenced by no meaningful slowdown in production, due in part to hedging by producers who have locked in favourable forward selling prices. These contracts ensure they still make money and continue to profit on production during 2012. A warmer winter across North America hasn’t helped the case for natural gas either.

Given the bigger technical profile is decidedly bearish, and the fundamentals questionable for natural gas at this time, I am inclined to avoid natural gas. A bullish breakout from the triangle I’ve noted here might give short termed traders a bit of upside, but thats not a trade that I’m comfortable with just yet.