A reader asked me to blog on Europe, so I will cover it in this blog. Europe is a big place – it has lots of individual markets that make up the whole – so I must admit that it’s harder to make a blanket statement regarding “Europe”. Investors sometimes do this with the Emerging Markets – which presents a similar problem. For example, readers of this blog, and my BNN / Investors Digest/ Moneyletter readers know that we at ValueTrend went long India and China about a year ago. I certainly wouldn’t have bought a broad Emerging Markets ETF or mutual fund at that time. Russia, South Korea, Brazil, and many others within that index are disastrous looking markets. It’s dangerous to paint them all with the same brush, given the fantastic charts in some regions, and terrible charts in others.

So rather than look at a broad European market ETF, I thought I’d look at a few of the predominant European markets on today’s blog, as well as the currency. Let’s start with the Euro- above. The currency is certainly a currency problem for North American buyers of these markets.  I probably don’t need to say much about this chart, except “yech!”. The decline of the Euro has affected the ETF’s representing share ownership in these markets. Investor considering European stocks, ADR’s or market index plays should be aware of this consequence.

The only positive thing going for the Euro may be the extreme level of pessimism by traders, which has in the past been a pretty good contrarian sentiment indicator. Here’s the chart, courtesy of www.sentimentrader.com 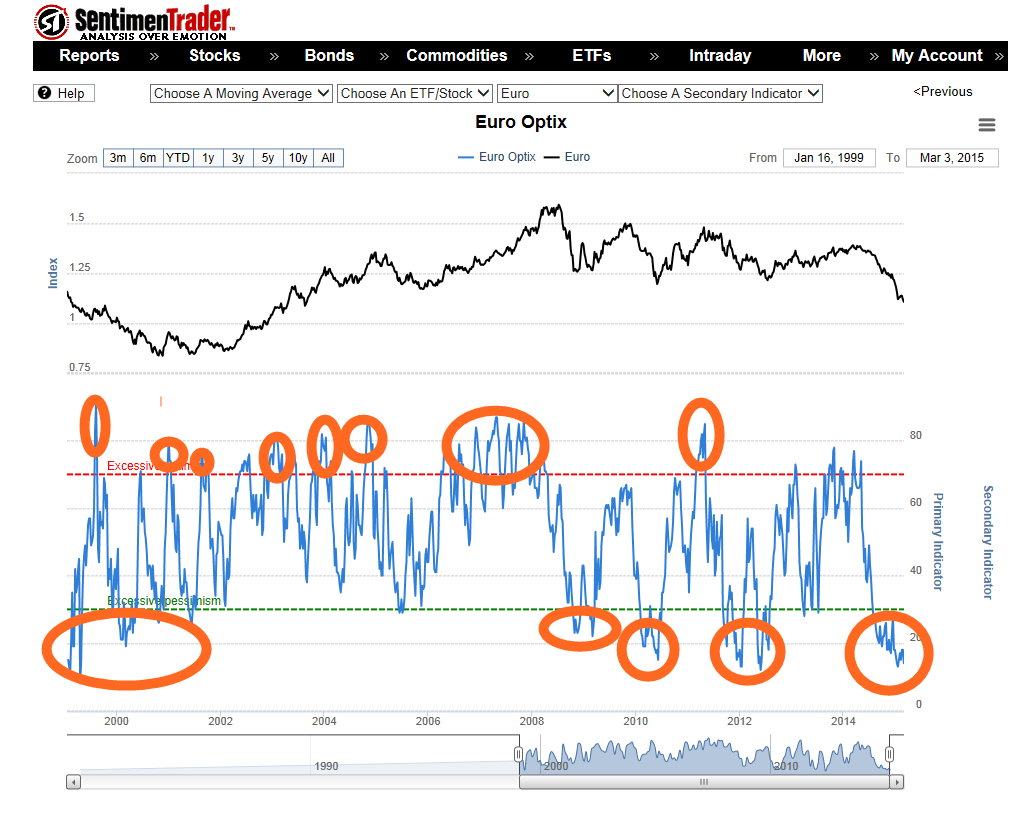 As you will note, were into the “extreme pessimism/ buy zone”. I’ve circled past extremes at both ends of optimism/pessimism, and you can see it’s been a good indicator of things to come for the Euro. Keep in mind that this, like all sentiment indicators, is a “LEADING” indicator, not a “coincident” timing tool. Thus, you may need to wait for a base to form before acting confidently on this trade.

Now let’s look at some specific European market index charts, via their ETF’s. Click on the smaller charts to see greater detail.

Belgium & Netherlands—trend is good, hitting resistance at this time

Spain – a downtrend with no base forming at this time. Avoid.

Italy—much too early to act on this, but a potential head and shoulders bottom forming. Wait for the neckline break before acting!!

My next appearance will be this Wednesday March 11th, 2015 at 6:00 PM EST for their 1-hour call-in MarketCall show. Phone in with your questions on technical analysis for me during the show. CALL TOLL-FREE 1-855-326-6266. Or email your questions ahead of time (specify they are for Keith) to [email protected]