This week’s sector coverage is a little unusual for me. You see, I’m going to present a technical opinion on the TSX Venture Composite Index. And I really, really hate penny stocks. They are often illiquid, sometimes manipulated, and usually difficult to chart due to their very concentrated audience of speculators. Penny stock traders really don’t represent the average investor, in my view. Having said all of that, I do recognize the need for emerging venture companies to capitalize their operations, and the penny stock market allows them to do so. And yes, some of them even make it to the big boards. But not many -it’s a gamblers market.

So, let’s consider this week’s sector as a look at something that only the inner daredevil in you might want to consider. If you are so brave, iShares does offer an ETF that attempts to mimic this index under the ticker of XVX-T.

The chart above shows us that the venture exchange has been in a downtrend trend since early 2011. It looks like it’s trying to form a “cup & handle bottom”, but that formation will not be confirmed as a true bottom consolidation until a breakout past the handle . The handle – which lies at around 1300 – also lies at the cusp of the down trendline. You can see just how important it will be to break the 1300 level with conviction, given both the trndline resistance and the handle formation coming together at this point. Should that happen, however, the rewards could be significant. I’d target 1600-1700 as a minimum.

Supporting the potential for a breakout would be the declining volume during the downtrend on the weekly chart above–note how much its fallen since 2009. Obviously, people aren’t speculating on venture stocks much as they used to. But declining volume in a downtrend also suggests a lack of conviction in the trend. If volume spikes, that could indicate a change in trend. Also–volume does appear to be picking up as the cup & handle formation has been forming. Supporting the possibility for a successful bottom for this index is its comparative relative strength vs. the TSX on the daily chart below (bottom line). Its outperforming the senior index lately. A move above the 50 day MA in August (circled) and oversold momentum oscillators (stochastics and RSI on the daily chart) could also put some upward pressure on the venture index. 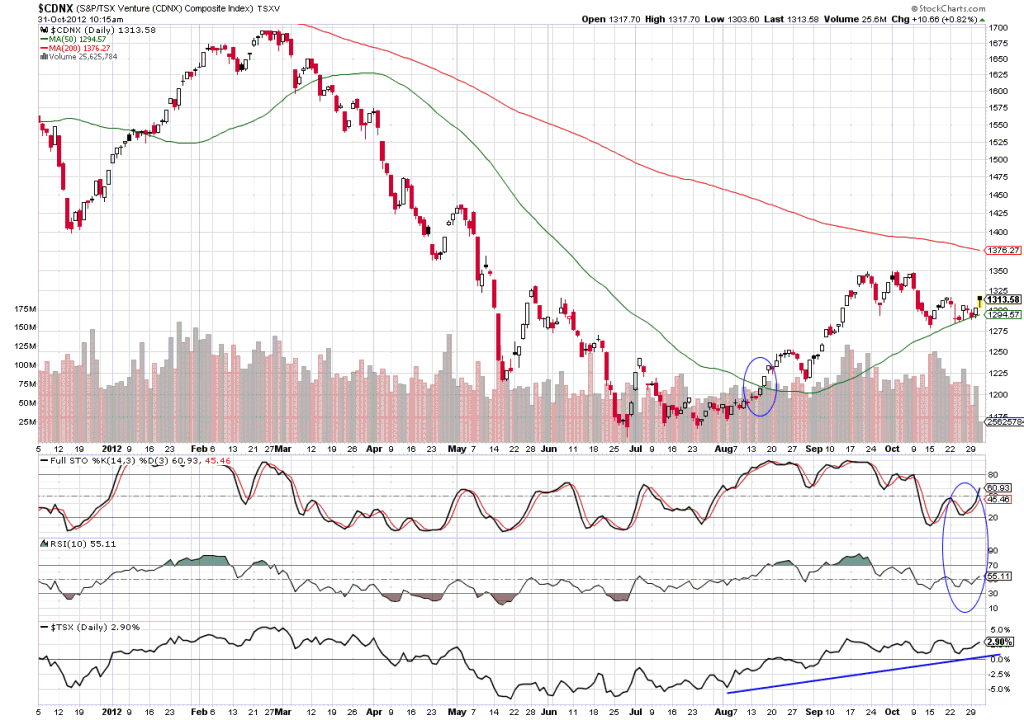 All in, the TSX Venture Exchange may be ready for a move – but before I’ll be interested, I’m looking for a strong move well over 1300 for 3+ days, supported by increased volume. It’s not a trade that I’d consider with too much of my capital, but it might be a fun little trade if the ducks line up over the next little while.