Home / One with the market

One with the market

“It’s easier to fool people than to convince them they’ve been fooled.” Mark Twain

At this point, a lot of people are forming theories and opinions about the market. The bulls are theorizing that the economy is going to continue expanding and earnings will continue growing for a prosperous stock market. The bears are theorizing that we are entering into a debt-driven recession – some even theorize on a return to the gold standard. I think “Mr. Market” likes to fool people into trading the wrong way – much like some people like to appear smarter or more ethical than they really are. The hard part of investing – particularly in investing for other people as a Portfolio Manager – is to not fall victim to any of these seemingly logical arguments for the bull or bear case. By keeping an open mind and considering the potential of ALL the possibilities, we can trade safely. Ultimately we must let trend, breadth, investor sentiment, and key support/ resistance points guide us as they happen. We should not prognosticate or theorize beyond the near term. Taking the Zen approach of being “one with the market” might be a good analogy.

The Zen of current market behaviour

Master Yoda might make the following unbiased and unemotional observations. The S&P 500 must be considered in a bear market until it:

So far, the S&P has taken out its low of 2540. It has not moved over its 200 day SMA. It has a long journey before it sees the high of 2900 again. So—the best we can say right now is that the market is possibly back in its consolidation/ trading range…the one that held the SPX between 2900 and 2500 (rounded off) for the entire year of 2018.   The black boxes on the chart below shows us that this consolidating market – if that is indeed what it is (as opposed to an outright bear market) is about as unique as seeing a bunch of SUV’s, pickup trucks, and mini-vans parked at your kids soccer game. 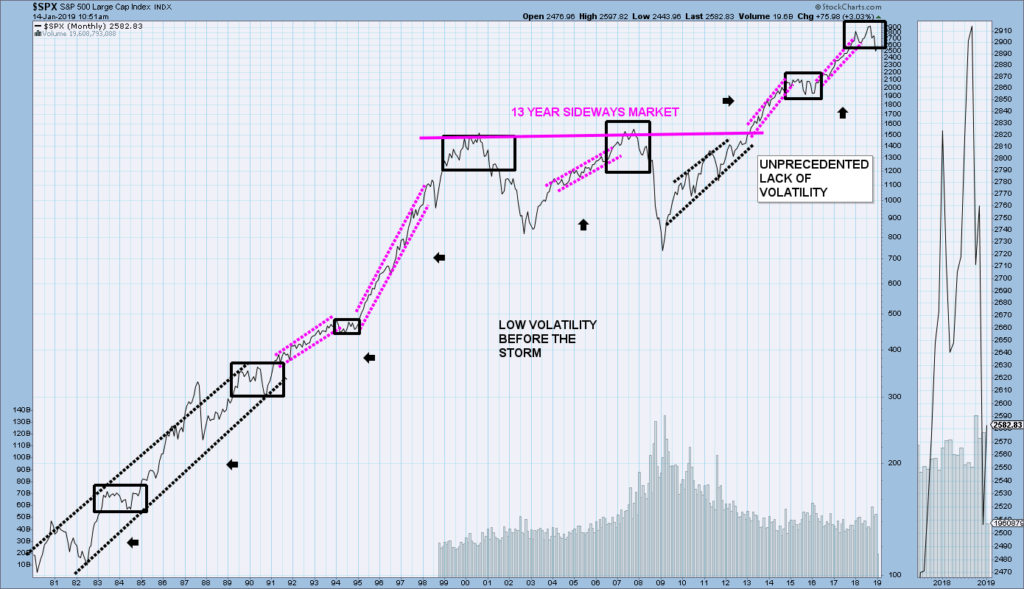 On the subject of the S&P 500 not being above its 200 day SMA. This applies to the S&P 500 components as well – recently sentimentrader noted an indication of lousy breadth (participation). Only a third of the S&P 500 stocks are above their 200 day SMA’s. This is significant. It signals that the breakdown of the market was not entirely due to a meltdown of the FANG’s. It was pretty broad based.

The next chart shows us that the SPX is not signalling an outright “sell” according to my neartermed timing system. However, it is certainly showing us that stochastics is extremely overbought, RSI is past the “50” mark (making it no longer oversold) and price is well past the 20 day SMA within the B-Band indicator. None of those signal a sell, but it isn’t unusual to get a small pullback when these indicators reach current levels. Moreover, the rally from the Dec. 24 low has been on the back of low volume. Finally, it is toying with the high-2500’s level I keep talking about (blue horizontal line). So it’s possible that we may get a few days of weakness here. 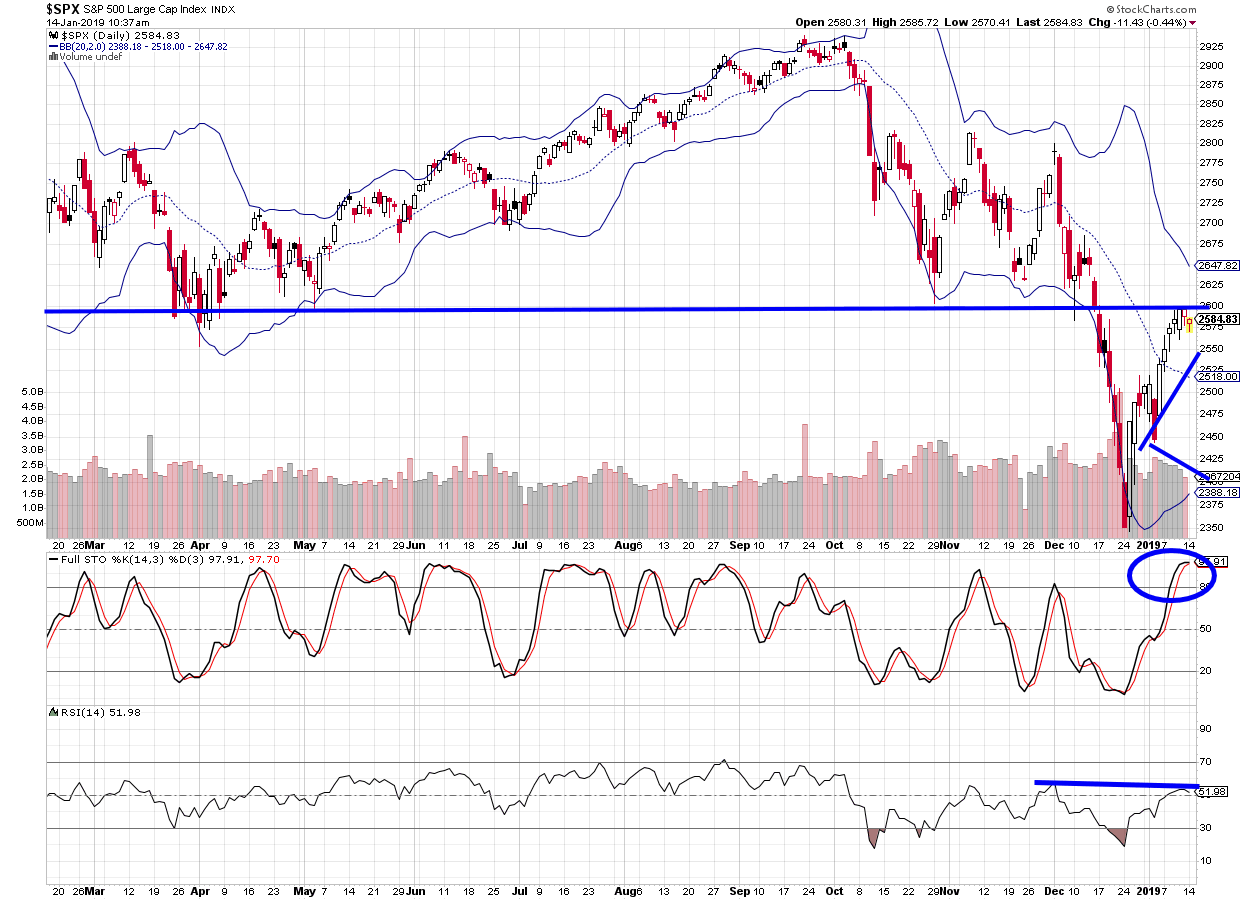 So long as the SPX stays above 2540, I’d probably look at a neartermed pullback as a buying opportunity. To reiterate last week’s blog – this is a traders market. There is potential danger that we are in the early stage of a bear market – so we must be prepared to act in either direction if key support is broken (bearish) or (bullish) if the market moves firmly ahead of 2580+.

Are you in Orlando in February?

If you are in Florida as a visitor, a snowbird, or as a resident, you might like to attend the MoneyShow. I’ll be speaking at the Orlando MoneyShow on Feb 8th at 3:00pm at the Omni Resort at Championsgate. If you haven’t been to that resort, it’s quite lovely–and parking is free! The link below references my talk: