On the one hand….

David Chapman, another Technical Analyst and a man who I respect, noted in a newsletter that there are a number of factors that look pretty bearish for the stock market right now. These include:

AS Mr. Chapman noted: “It takes many years for a speculative bubble to build. It can be wiped out in a very short time….The warning signs are there. But are they being heeded?”

I do not dispute MR. Chapmans observations. However, I have the feeling that we are likely to continue a bullish pattern (neartermed volatility aside) until closer to the US election period next year. Thereafter, perhaps anytime between next summer and year-end,  I believe Mr. Chapman’s concern’s may have more potential to come to fruition. Here are my technical thoughts that might imply some neartermed (1 year) upside for the markets: 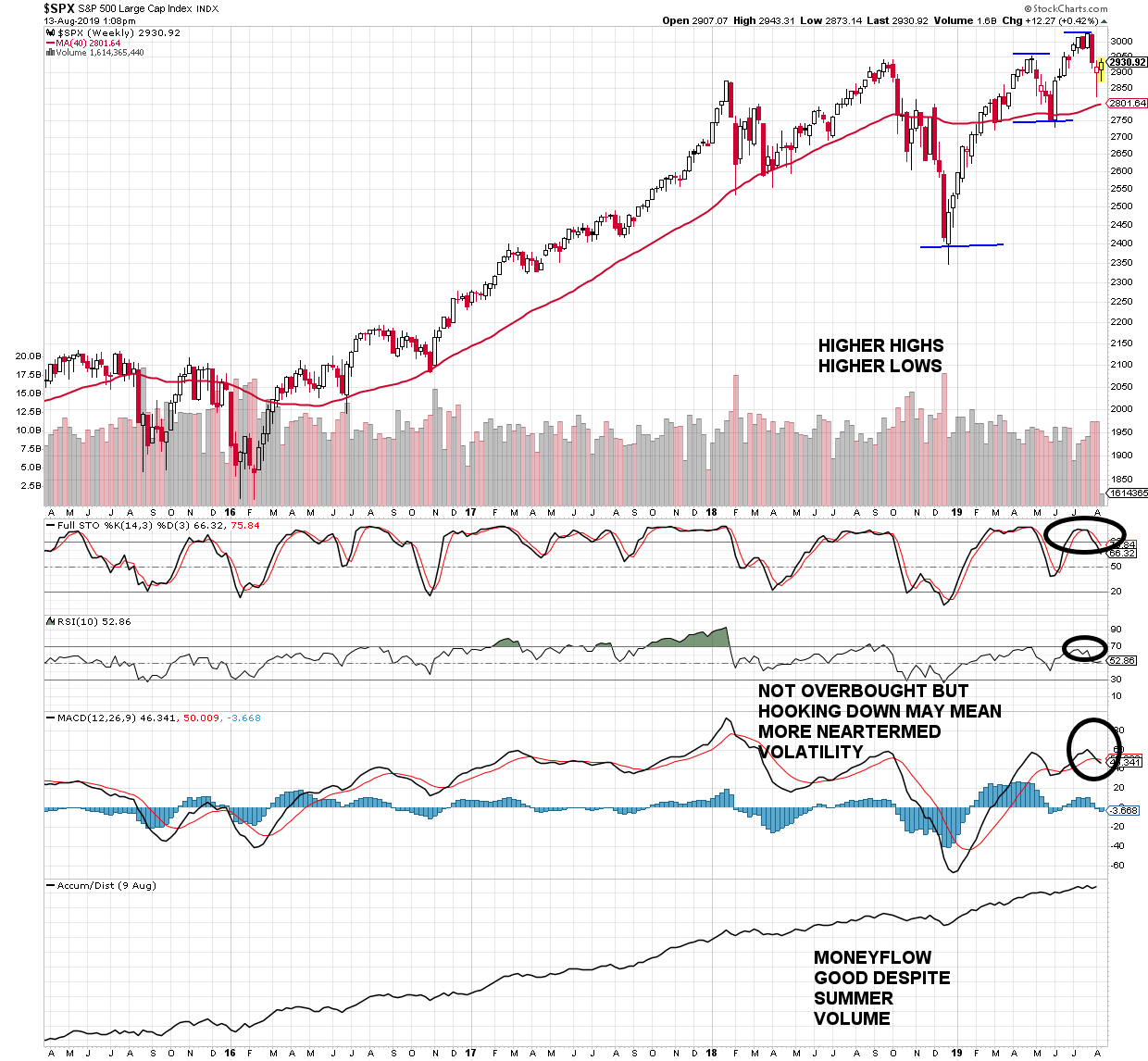 Despite the market malaise of late (which we wrote about in our latest ValueTrend newsletter – feel free to subscribe to it by clicking here), I’d give the market a good chance of rising into or after the fall. A bullish trend over the winter and into next year may be the last leg in this bull market. Or not. The beauty of technical analysis is that we don’t need to make predictions beyond the near-term. For now, things are rocky, but the trend is weakly bullish. So we can stay the course. We can change our outlook if the market tells us to.

I’ll be away next week but will answer comments up to this Friday August 16th. Last vacation (end of July) ended up with a 5% market pullback. Here’s hoping I don’t jinx it again!

I hope I can meet some of the readers of this blog at my MoneyShow presentation: September 20th at 4:15 at the Metro Toronto Convention Center

Don’t forget to register for the MoneyShow ahead of time and miss the lineups. Here is the link to my presentation, and registration information.

I’m writing this addendum one day after I wrote the above blog. Here we go again today–with more selloff after a positive day yesterday on the markets. This adds credence to my “trading in a box” comment in my last “Ask me anything” blog, which you can link to here. The market is fairly range bound at this moment. In my opinion, one catalyst that might spur the next (and who knows..final?) leg of the bull will be a finalized trade deal by Trump with China. Below is a comment written by Larry MacDonald of Bear Traps – whos’ research we subscribe to, and respect. The way I read this comment, the thought is that the US has little choice but to crack the deal sooner rather than later:

Either be forceful on tariffs, push US into recession and get Warren or Biden in the White House. That will surely leave China as the victor. Or back off now, try to win and come down hard on China in 2021. Today’s action by the WH appears weak and on many fronts, looks bad. Either weak or a backtrack. Had this been announced first, we would have more pressure on fed and financial conditions (FCIs) would be more contractionary. The backtrack is actually wind at SPX’s back. And you still have 25% tariff on 50% of Chinese imports which are fairly easy substituted with non Chinese equivalents.