On the one hand…

A few notes regarding recent market activity. Some bullish observations, some bearish.

On the bullish side:

We have a lovely breakout for oil through my prior mentioned $42. Despite the failure of last week’s producers meeting, the market found reason to bid oil right through the old downtrend line. Although overbought on a near termed basis, WTI looks pretty good as a mid-termed play going forward. The bullish engulfing pattern is positive. And that’s going to help the markets, especially the TSX. 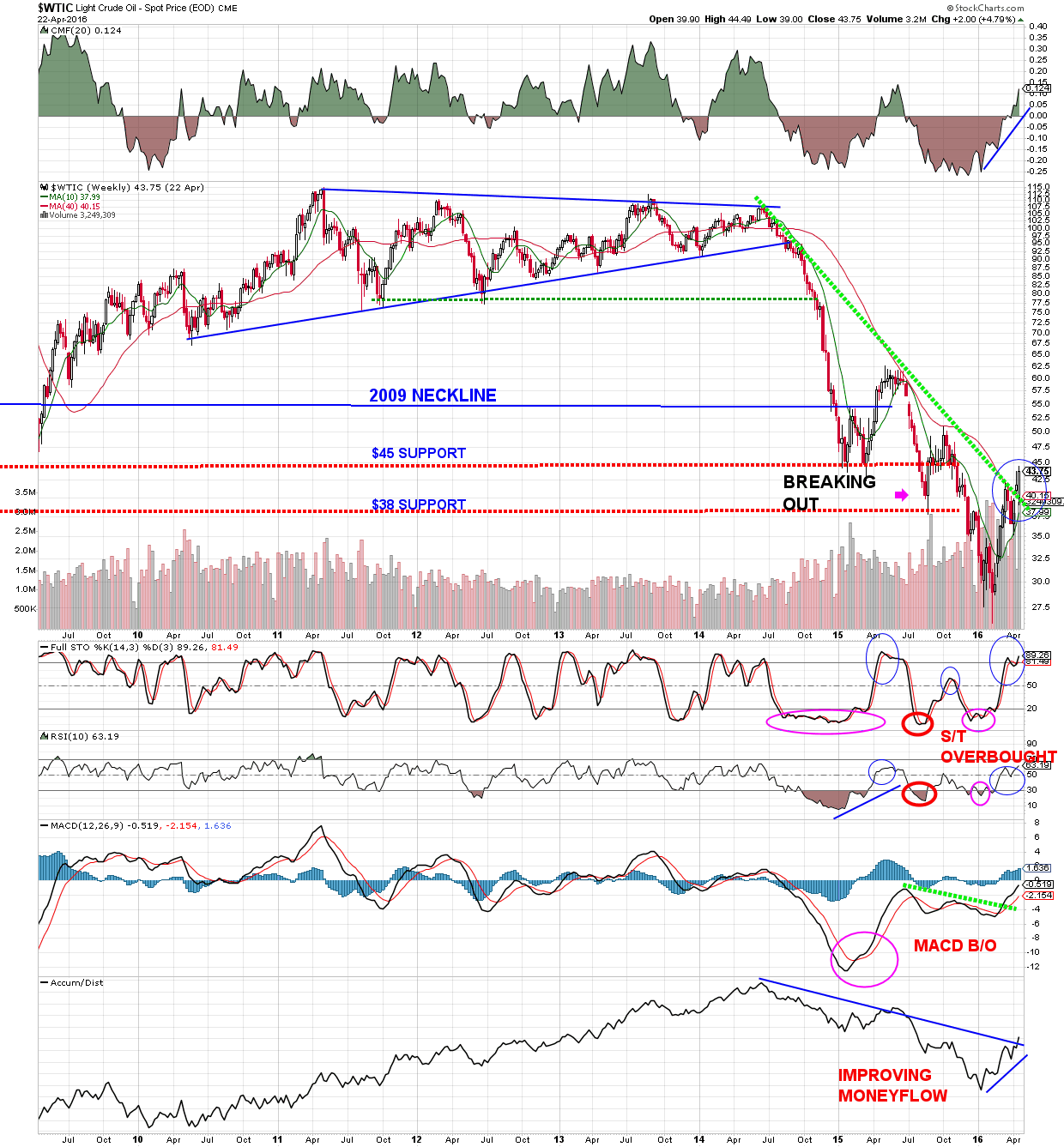 Also on the bullish side is the fact that momentum has been on the markets side. Paying no attention to the man behind the curtain (earnings and PE ratio), the S&P is making higher highs and higher lows on the daily chart (not so much on the long chart – see below).

Somewhat positive is the markets move above the 200 day MA–although, in a sideways consolidation pattern (as has been the case for over a year), one must pay less attention to commonly followed MA’s. Trend following averages are not accurate in a trendless market – as markets will weave over and below the MA’s giving false signals until a trend emerges. Please see my book Sideways for more information on this trait. Below is a long termed view of the markets—note the change in trend, not seen since the beginning of this bull. Click to enlarge. More on this chart in a moment…

Finally, SPHB (Powershares high beta) vs. SPLV (Powershares low beta) relative strength is picking up – money is going back into beta as you will note on the bottom pane. When money leaves the safety of low beta dividend payers and moves into growth, that can be a bullish sign. It should be noted on the chart below that the high beta ETF is facing a wall of resistance shortly. 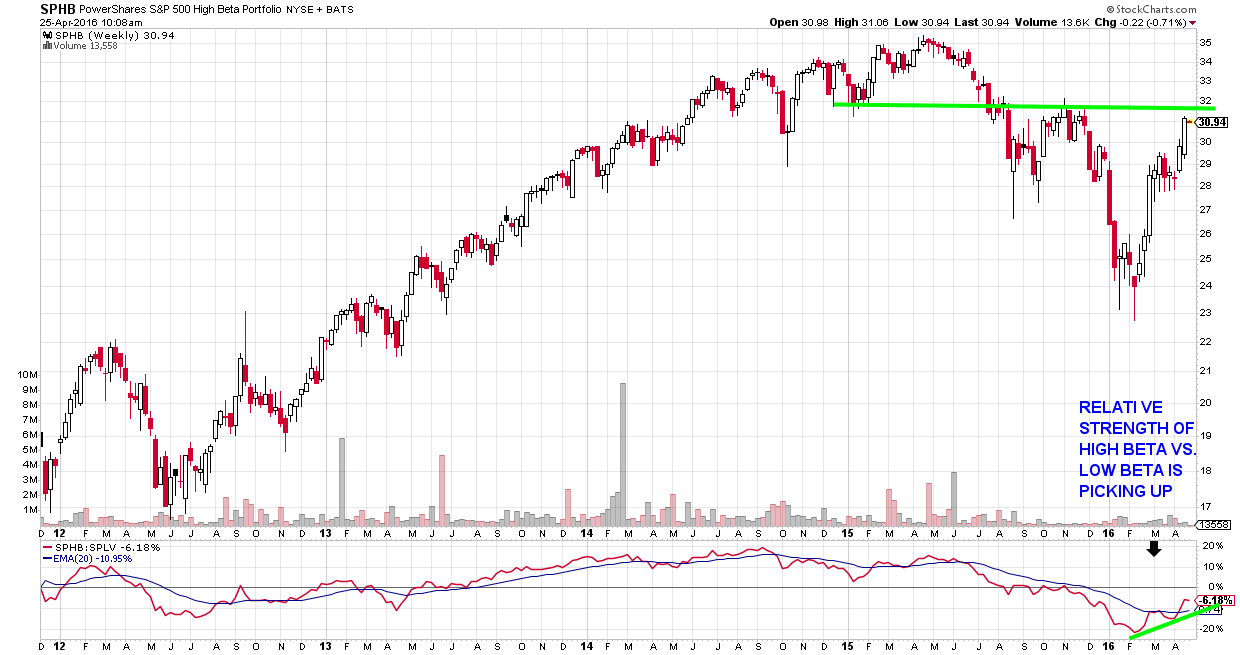 On the bearish side:

On the bearish side for the S&P500, the important overhead resistance of 2135 looms ahead. This is a level not cracked since last May- despite numerous attempts. Similar rallies to 2130-ish have failed – and this most recent attempt at breaking the old highs will once again face seasonal headwinds.

Seasonals–Sell and May and go away?

Also on the less-bullish side – the longer termed chart of the S&P, above notates the markets reliance on easy-money since 2009. The coincidence of easing and stimulation is clearly seen on this chart. It is inarguable that the Fed’s change in tone from dovish to hawkish in 2014 was coincident with the end of the 2009- 2014 uptrend. It is unknown at this time what the market will need to break through the current consolidation and emerge into a new uptrend.

Finally, on the negative side is the recent “doji” spinning top candle on the daily chart. Doji’s and hammers are fairly good at predicting market turns at either extreme. Watch the next few days to see if this one counts. 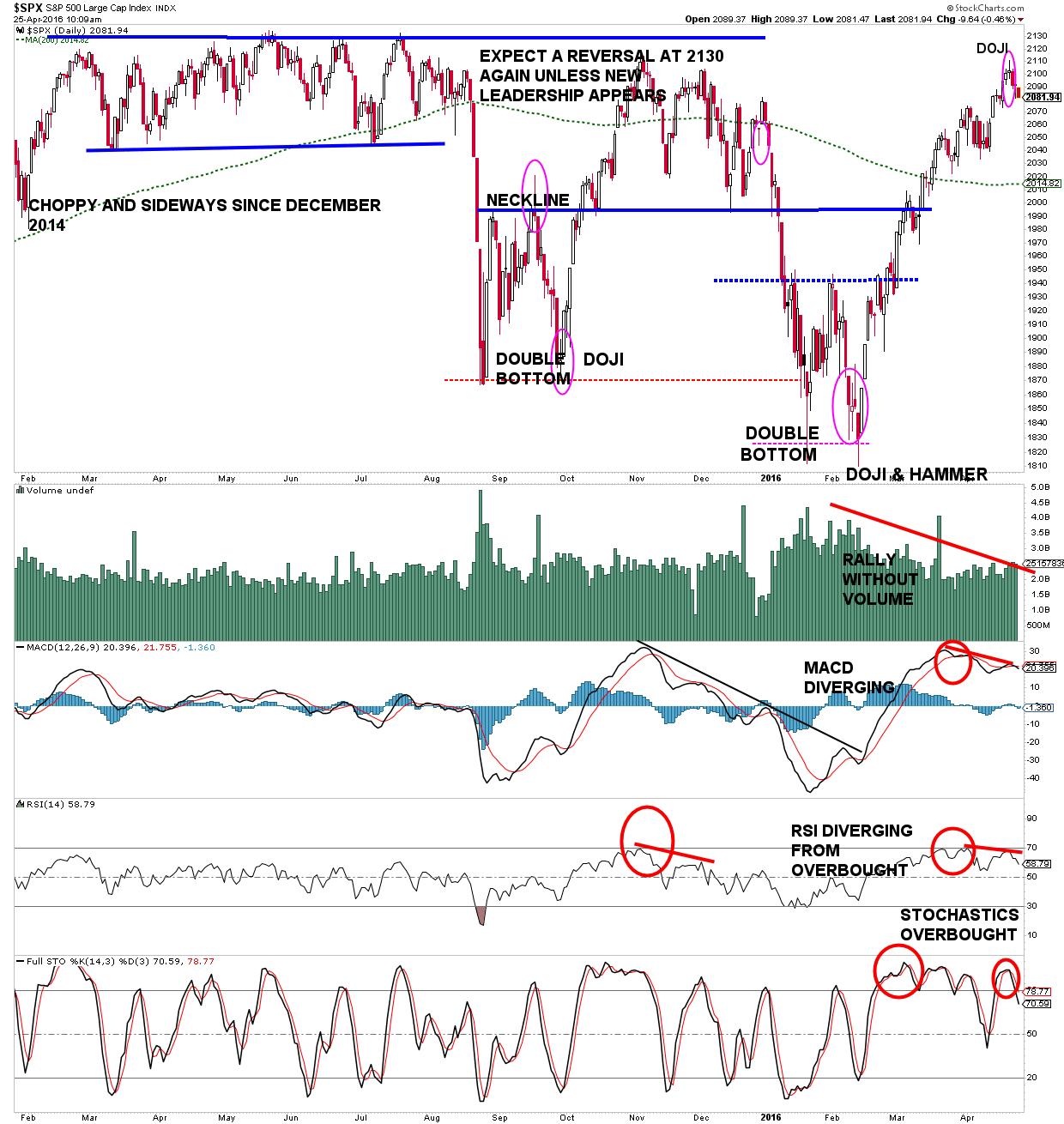 The balance of this month will be telling. A failure or a positive break of the old highs by more than a few days will guide us towards a bullish or bearish trading stance going forward.