WTI crude took an abrupt punch in the gut yesterday after a nice rally that began in early March. A couple of my long time readers asked me for an update on oil – so I thought I’d oblige.

There are a few factors we may want to examine when looking at any sector or commodity chart. They are:

Let’s look at these factors for oil.

The definition of an uptrend is that of prices forming higher highs and higher lows (troughs) The weekly chart of WTI below shows us that oil has been making higher troughs since its low point in 2016. However, oil has not put in a higher high (peak) since December of 2016. The trend for WTI crude is that of consolidation. The positive within that observation is the fact that the 200 day MA is still below WTI’s price. That gives some hope that the consolidation has some positive bias. 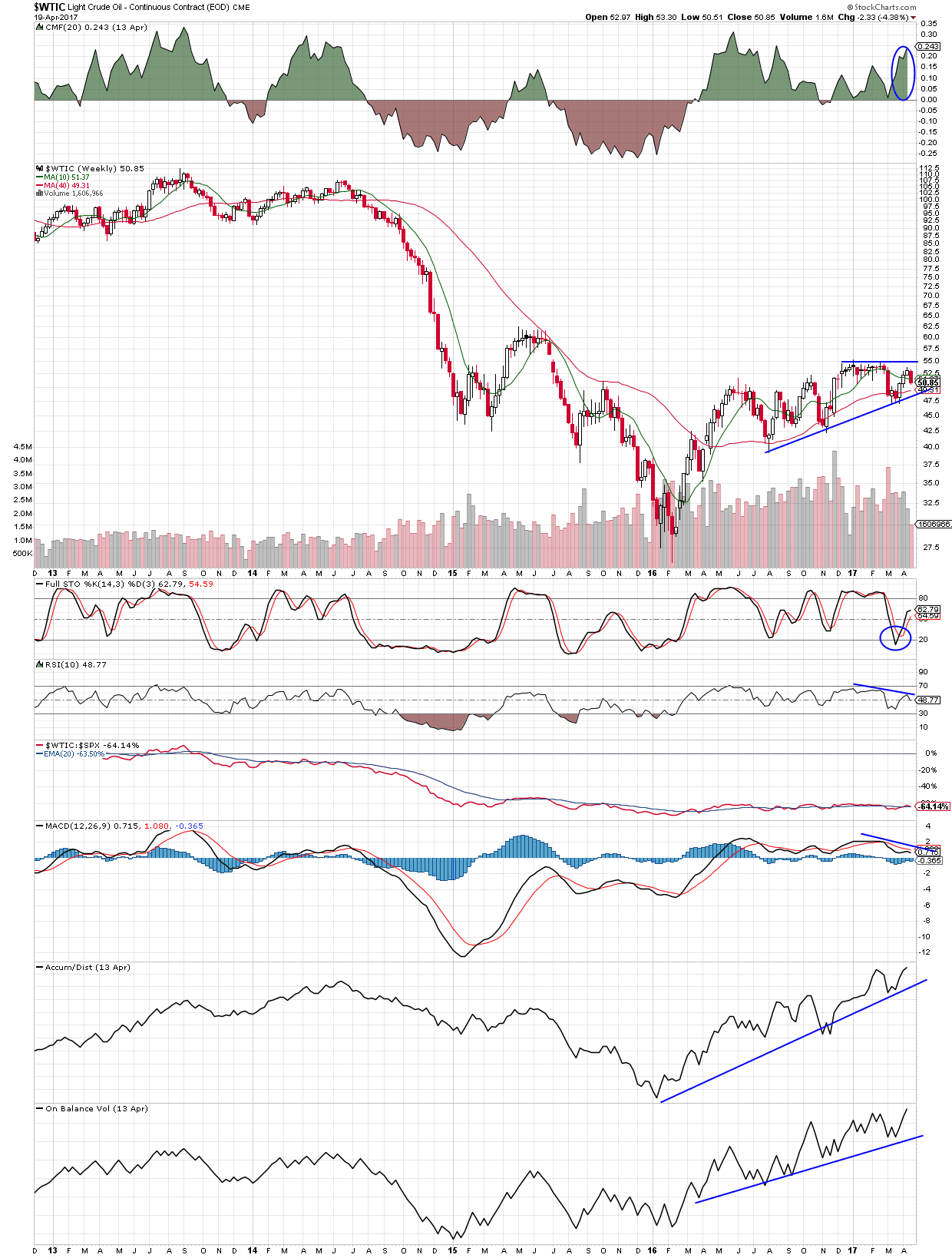 The consolidation pattern looks to be the early stages of an ascending triangle – evidenced by the flat point of resistance at $55, with rising troughs since the summer of 2016. Consolidations always break out- eventually -and right angled triangles with ascending patterns typically break out to the upside. However, this one is still in the early stages of formation. There may be a bit time left for the triangle to complete itself before a breakout on either side occurs. And don’t forget, just because such formations have a tendency to break out positively, that is not an assurance it will in fact happen that way. A breakdown through about $47 or so would be bearish for crude.

The sentimentrader.com survey optix (which is a collection of various sentiment studies such as AAII, Market vane, Ned Davis, Bloomberg, etc) showed overly optimistic public opinion on oil leading into yesterday’s pullback. Note the proximity of the Optix line to the red “danger zone” – which was briefly crossed.  That means dumb money was buying. 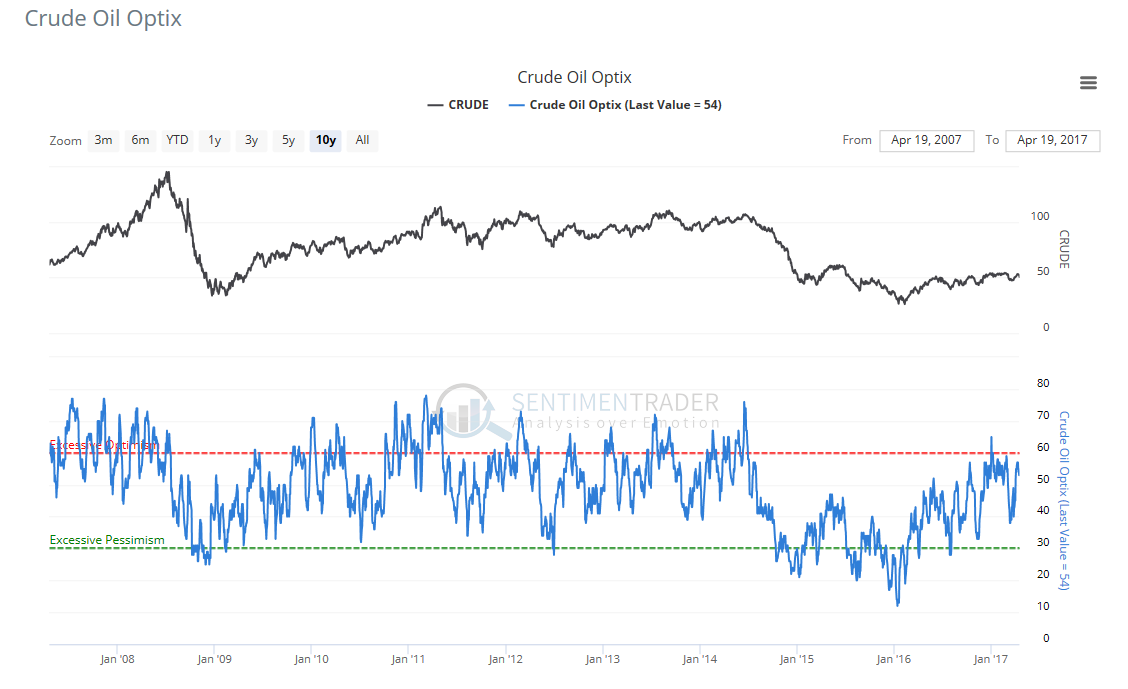 On the other side, commercial hedgers – which tend to represent the smartest guys in the room, have been shorting (hedging) their oil positions – as seen by the indicators move to the red “danger zone” line. Sentimentrader.com also provides this chart. All in, these sentiment studies are negative factors for oil. 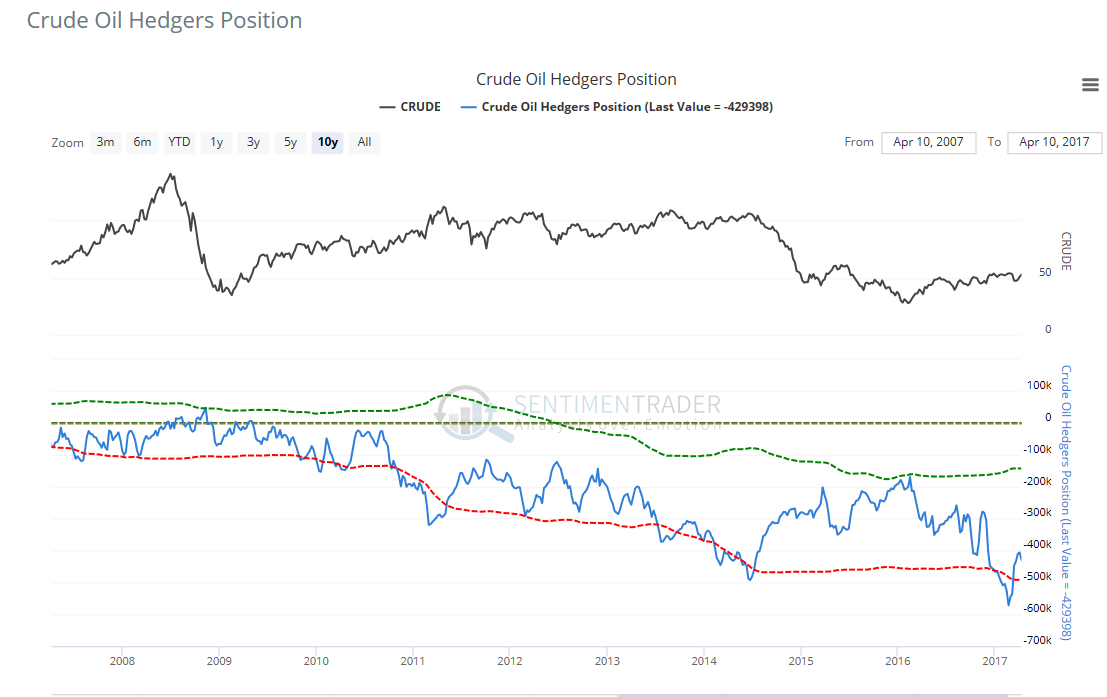 Moneyflow is shown through the Accumulation / distribution line second pane from the bottom on the chart at the top of this blog. This means positive days have had more volume than negative on a cumulative basis. Moneyflow momentum is illustrated in the top pane of the chart-the Chalkin indicator shows us that momentum of that positive money flow bias remains bullish at this time. On balance volume, which I don’t bother posting on my charts due to its similarity to cumulative money flow (accumulation/ distribution line) is also positive. It also tells us that positive days are generally getting more trading volume than negative days.

Price momentum is somewhat negatively biased in the mid term and long termed RSI and MACD indicators. The short termed momentum indicator, Stochastics, recently turned up. This may be a short termed positive for oil. Comparative strength to the stock market (S&P 500) is flat.

Seasonal strength for oil starts in February and ends in May–it can extend out to June in some circumstances. Whatever the case, seasonality is ending for oil pretty soon. From a seasonal perspective, oil needs to poop or get off the pot – as the saying goes. The time for seasonal outperformance for the commodity is coming to an end.

As a technical analyst, I’m usually hesitant at the best of times to talk about the fundamentals of a stock or sector. ValueTrend employs fundamental analysis via resident CFA Craig Aucoin’s expertise. But even Craig is leery of providing too much fundamental insight on oil. The fact is, there are many, many moving parts to examine with oil. Everything from East vs. West production and cutbacks, world demand, world supply, stored oil, gasoline usage, new energy sources, politics, currencies, institutional influences, and other factors. These all drive the price of oil behind the scenes – and no one factor is the reliably deciding one for its movement.

I think that you get the picture here of how it makes little sense to create a thematic view towards oil pricing given all of the volatile factors mentioned above.

At this time, it is best to see if oil can rally back up to $55 and consider selling at that level. If not, it may be best to sell and move on before the end of the seasonal period in May. As seasonal expert Brooke Thackray and I recently discussed on the phone – energy, technology and US banks were amongst the leaders of the “Trump Bump” stock market rally.  If energy and US banks do not rally back in the near term, this indicates that the market may be in for a greater than normal period of weakness at some point during the coming “worst six months” seasonal period of May to October.