Home / Oil stocks not ripe for picking yet

Oil stocks not ripe for picking yet

Energy stocks, as illustrated by the iShares XEG units are in a near termed price channel. The pattern differs a little from that of oil (many energy stocks are “gassy” making them differ in performance from crude oil) , but there is still a reasonable amount of influence by oil prices to be mindful of its influence on the energy stocks. Nat gas appears stuck in a wide trading band with no long termed trend discernable. So it’s difficult to be too excited about Nat Gas and the stocks that are influenced by it, beyond a potential rally off of current support.

I will blow my own horn here and note that in prior blogs, I suggested that the current oil meltdown would target the low to mid $40’s (I was right) and would follow through with a similar pattern as happened in the 2009 bottom (again, it would appear I was correct on that assumption). Here are the charts I presented in the late winter to compare the 2008 bottom, with an updated current chart for oil. As noted in my prior blog – oil should consolidate in a “handle” as it did in 2009, before making its next move. Note the current handle on the chart -similar to the 2009 formation. As Technically driven traders, we should be disciplined and avoid the trade until a breakout from that handle occurs.

Specific to the energy stocks – Some significant near termed resistance on XEG will come in at around $15.50 if and when it rallies back to that point. Meanwhile, the ETF is at the bottom of its trading channel, and it showing signs of oversold conditions. Short termed and mid termed momentum oscillators are oversold but not yet hooking up. Chalkin Moneyflow oscillator (top pane) is oversold, and hooking up, while the Cumulative Moneyflow indicator (bottom pane) is hooking up from a rather choppy pattern. That indicator’s choppy pattern suggests that investors are still pretty confused about the oil trade. Buy? Hold? Sell? Money is not trending into or out of this sector ETF at this time. I would like to see a hook on the oscillators and a revival of moneyflow before considering a trade on these stocks. 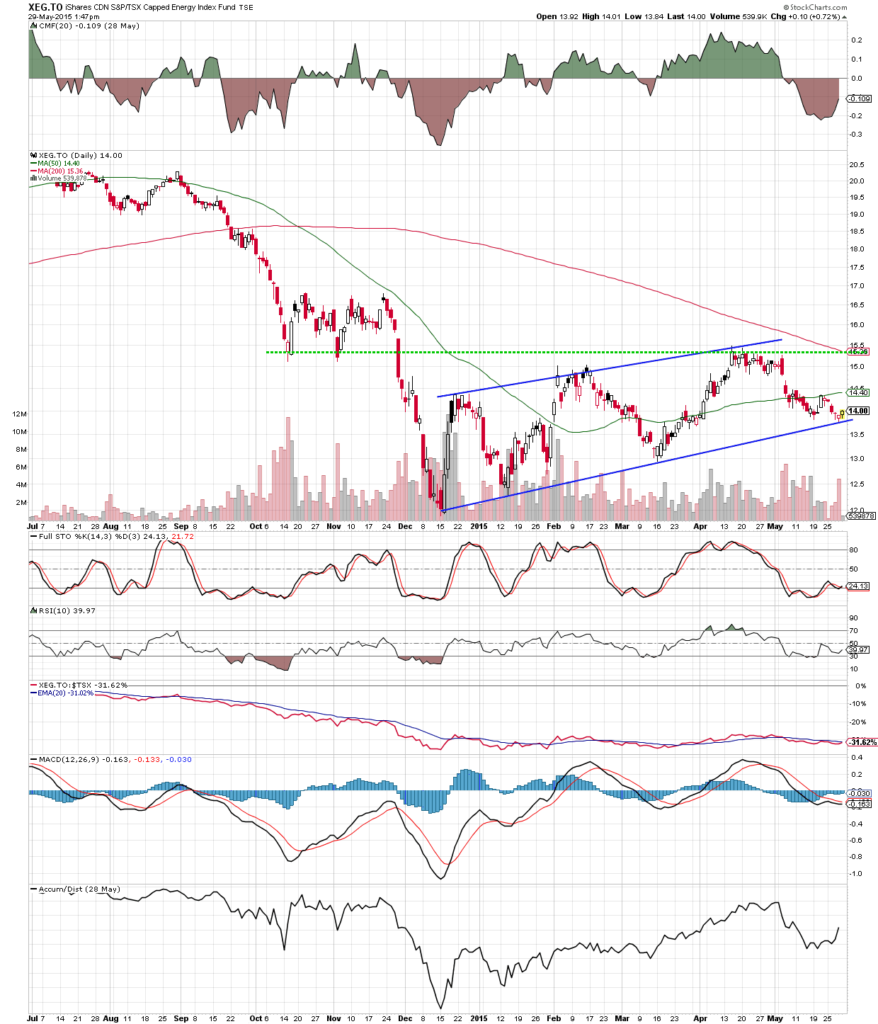 Thackray’s Guide suggests that the second seasonal period for energy (the first being Feb-May) will begin late July. That time frame may end up being an ideal entry point this year. The charts suggest waiting a while before entering a trade on crude directly, or on energy stocks.

Tune in to BNN next this Friday to catch me live on BNN’s 1:00 pm call-in show.

You can email questions now to [email protected] – specify they are for Keith – or you can call in with questions during the show’s live taping between 1:00 and 2:00pm. The toll free number for questions is 1 855 326 6266